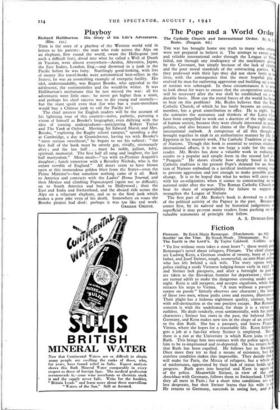 The Pope and a World Order

The Catholic Church and International Order. By A. c. Beales. (Penguin. 6d.) THE war has brought home one truth to many who oth were not prepared to believe it. The attempt to create a and reliable international order through the League of Na failed, not through any inadequacy of the machinery pros by the Covenant, but simply because of the lack of rehab and the poor moral standards of the contracting parties. they professed with their lips they did not show forth in lives, with the consequence that the most hopeful plan evolved by man for outlawing aggression and building up a s of nations was sabotaged. In these circumstances it is na to look about for ways to ensure that the co-operative action will be necessary after the war shall be established on a durable basis. How can the moral forces of the world be bra to bear on this problem? Mr. Beales believes that the R Catholic Church, of which he has lately become an enthus member, has a great contribution to offer. He is right. the centuries the statesmen and thinkers of the Latin (1 have been compelled to work out a doctrine of the right orde of human society, because they were closely interested in pro politics, and also because the claims of the Papacy involved international outlook. A conspectus of all this thought brought together in 1936 in an authoritative manner by Mr. Eppstein in his massive work, The Catholic Tradition of the of Nations. Though this book is essential to serious student: international affairs, it is on too large a scale for the ord reader. Mr. Beales has done a valuable work in reducing results to a popular and simple form in the second half of " Penguin." He shows clearly how deeply based in R Catholic tradition is the present Pope's demand for an As tion of Nations embodied in a juridical institution strong no to prevent aggression and just enough to make possible pea change. It is to be hoped that what he writes will carry we with his co-religionists when it comes to constructing an in national order after the war. The Roman Catholic Church bear its share of responsibility for failure to support strengthen the League of Nations

The first part of Mr. Beales's book is .devoted to a de of the political activity of the Papacy in the past. Because comes first, by its naiveté and by historical judgements a superficial it may prevent many readers from pushing on to valuable statements of principle that follow.