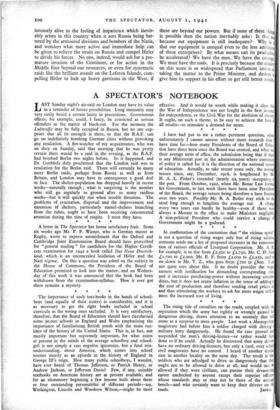 LAST Sunday night's air-raid on London may have its value as a reminder of future possibilities. Long immunity may very easily breed a certain laxity in precautions. Government offices, for example, could, I fancy, be convicted as serious offenders in the matter of black-out. For the moment the Luftwaffe may be fully occupied in Russia, but no one sup- poses that all its strength is there, or that the R.A.F. can go on indefinitely bombing German cities without provoking any retaliation. A fire-watcher of my acquaintance, who was on duty on Sunday, said that morning that he was pretty certain there would be a raid in the evening, as the R.A.F. had bombed Berlin two nights before. So it happened, and Dr. Goebbels duly proclaimed that the London raid was in retaliation for the Berlin raid. There will certainly be many more Berlin raids, perhaps from Russia as well as from Britain, and London may have in consequence a good deal to face. The shelter-population has dropped heavily in recent weeks—naturally enough ; what is surprising is the number who still go regularly to ground after so many raidless weeks—but it will quickly rise when trouble threatens. The problems of evacuation, dispersal and the improvement and extension of shelters, particularly tunnel-shelters branching from the tubes, ought to have been receiving concentrated attention during the time of respite. I trust they have. * *