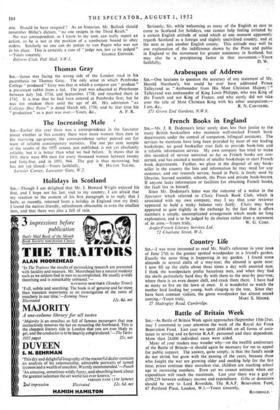 Snt,—Mr. J. R. Dodeman's letter surely does less than justice to the many British booksellers who maintain well-stocked French book departments under the control of competent, bilingual assistants. The services he mentions have long been provided by most of our leading bookshops; no good bookseller ever fails to provide book-lists and a reliable information service. My own company has tried to make this standard of service universal so far as French books are con- cerned, and has assisted a number of smaller bookshops to start French book departments. Further, we place at the disposal of any book- seller in the country the lists and information he may need for any customer, and our research service, based in Paris, is freely used by libraries, learned societies, schools, the Press and private book-buyers. If anyone lacks information or facilities for obtaining French books, the fault lies in himself.

Since Mr. Dodeman's letter was the outcome of a notice in the Spectator which referred to Choix French Book Club, which is associated with my own company, may I say that your reviewer appeared to hold a tricky balance very fairly. Choix may have appeared to gain slightly in the exchange by the fact that it offers members a simple, uncomplicated arrangement which needs no long explanation, and is to be judged by its choices rather than a statement