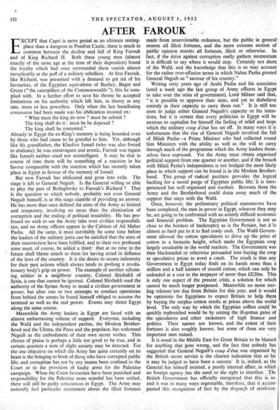 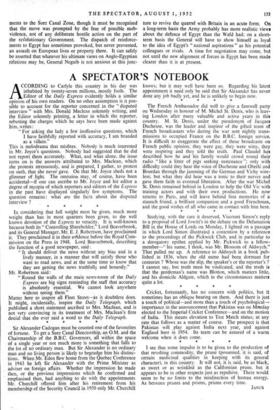 EXCEPT that Capri is more genial as an ultimate resting- place than a dungeon in Pomfret Castle, there is much in common between the decline and fall of King Farouk and of King Richard H. Both these young men (almost exactly of the same age at the time of their deposition) found the loyalty which had once surrounded them vanish almost inexplicably at the puff of a military rebellion. At first Farouk, like Richard, was presented with a demand to get rid of his favourites, of the Egyptian equivalents of Bushey, Bagot and Green ("the caterpillars of the Commonwealth "); this he com- plied with. In a further effort to save his throne he accepted limitations on his authority which left him, in theory at any rate, more or less powerless. Only when the last humiliating concession had been made was his abdication insisted on : " What must the king do now ? must he submit ?

The king shall do it : must he be deposed ?

The king shall be contented."

Already in Egypt the ex-King's memory is being hounded even by those who had cause to be grateful to him. Yet, although like his grandfather, the Khedive Ismail (who was also forced to abdicate), he was extravagant and erratic, Farouk was (again like Ismail) neither cruel nor unintelligent. It may be that in course of time there will be something of a reaction in his favour comparable with the reaction which has recently taken place in Egypt in favour of the memory of Ismail.

But now Farouk has abdicated and gone into exile. The stage is left to General Neguib. Is the General willing or able to play the part of Bolingbroke to Farouk's Richard ? That is the question to which nobody, probably not even General Neguib himself, is at this stage capable of providing an answer. He has more than once defined the aims of the Army as limited and temporary, involving no more than the elimination of corruption and the ending of political instability. He has pro- fessed no wish to see the Army take over civilian responsibili- ties, and no Army officers appear in the Cabinet of Ali Maher Pasha. All the same, it must inevitably be some time before the leaders of the military junta can be satisfied that the aims of their insurrection have been fulfilled, and to their two professed aims must, of course, be added a third : that at no time in the future shall blame attach to them for having acted in defiance of the laws of the country. It is the desire to secure indemnity for their past actions which always tends to prolong a revolu- tionary body's grip on power. The example of another reform- ing soldier in a neighbour country, Colonel Shishakli of Syria, is one that cannot be ignored. Colonel Shishakli used the authority of the Syrian Army to instal a civilian government in power, but after one or two attempts to conduct operations from behind the scenes he found himself obliged to assume the nominal as well as the real power. Events may direct Egypt along the same course.

Meanwhile the Army leaders in Egypt are faced with an almost embarrassing volume of support. Everyone, including the Wafd and the independent parties, the Moslem Brother- hood and the Ulema, the Press and the populace, has welcomed Neguib as the embodiment of their own secret wishes. This chorus of praise is perhaps a little too good to be true, and in certain quarters a note of slight anxiety may be detected. For the one objective on which the Ariny has quite certainly set its heart is the bringing to book of thosg who have corrupted public life; and corruption has not by any means been confined to the Court or to the provision of faulty arms for the Palestine campaign. When the Court favourites have been punished and responsibility for the Palestine arms scandal has been settled, there will still be guilty consciences in Egypt. The Army may naturally feel particular resentment about the illicit fortunes. made from unserviceable ordnance, but the public in general- resents all illicit fortunes, and the more extreme section of public opinion resents all fortunes, illicit or otherwise. In fact, if the drive against corruption really gathers momentum it is difficult to say where it would stop. Certainly not short of the Wafd, and the knowledge that this is so may account for the rather over-effusive terms in which Nahas Pasha greeted General Neguib as " saviour of his country."

Writing sixty years ago of Arabi Pasha and his associates (until a week ago the last group of Army officers in Egypt to take over the reins of government), Lord Milner said that, " it is possible to approve their aims, and yet to disbelieve entirely in their capacity to carry them out." It is still too soon to judge either General Neguib's capacity or his inten- tions, but it is certain that every politician in Egypt will be anxious to capitalise for himself the feeling of relief and hope which the military coup d'etat has set off. In many ways it is unfortunate that the rise of General Neguib involVed the fall of Hilali Pasha—a Prime Minister who had collected round him Ministers with the ability as well as the will to carry through much of the programme which the Army leaders them- selves have espoused. Yet the Army must obtain organised political support from one quarter or another, and if the breach with Hilali Pasha's independents is not bridged the most likely place in which support can be found is in the Moslem Brother- hood. This group of radical puritans provides the logical backing for a moral purge of Egyptian public Merit is inex- perienced but well organised and resolute. Between them the Army and the Brotherhood could drain away much of the support that stays with the Wafd.

Once, however, the preliminary political manoeuvres have been completed, the men in power in Egypt, whoever they may be, are going to be confronted with an acutely difficult economic ' and financial problem. The Egyptian Government is not as close to the borders of bankruptcy as is the Persian, but iris almost as hard put to it to find ready cash. The Wafd Govern- ment allowed the cotton speculators to drive up the price of cotton to a fantastic height, which made the Egyptian crop largely unsaleable in the world markets. The Government was then blackmailed or otherwise persuaded into buying the crop at speculative prices to avert a crash. The result is that any Government in Egypt today finds on its hands more than a million and a half kantars of unsold cotton, which can only be unloaded at a cost to the taxpayer of more than £E20m. This is only one aspect of the present crisis, a solution for ,which cannot be much longer. postponed. Meanwhile no more ster- ling releases'are due from Britain for this year, and it would be optimistic for Egyptians to expect Britain to help them by buying the surplus cotton stocks at prices above the world level. The only way by which the Egyptian coffers could' be quickly replenished would be by seizing the ill-gotten gains of the speculators and other racketeers of high finance and politics. Their names are known, and the extent of their fortunes is also roughly known; but some of them are very important men indeed.

It is usual in the Middle East for Great Britain to be blamed for anything that -toes wrong, and the fact that nobody has suggested that General Neguib's coup d'etat was organised by the British secret service is the clearest indication that so far it may be judged to have been a success: It is, indeed, as the General has himself insisted, 'a purely internal affair, in which no foreign agency has the need or the right to interfere. The British Government has officially recognised that this is so, and it was in many ways regrettable, therefore, that it accom- panied this recognition of fact by the dispatch of reinforce- ments to the Suez Canal Zone, though it must be recognised that the move was prompted by the fear of possible mob- violence, not of any deliberate hostile action on the part of the revolutionary Government. The dispatch of reinforce- ments to Egypt has sometimes provoked, but never prevented, an assault on European lives or property there. It can safely be asserted that whatever his ultimate views on Anglo-Egyptian relations may be, General Neguib is not anxious at this junc- ture to revive the quarrel with Britain in an acute form. On a long-term basis the Army probably has more realistic views about the defence of Egypt than the Wafd had; on a short- term basis the General will have to show himself as loyal to the idea of Egypt's " national aspirations " as his potential colleagues or rivals. A time for negotiation may come, but not until the new alignment of forces in Egypt has been made clearer than it is at present.