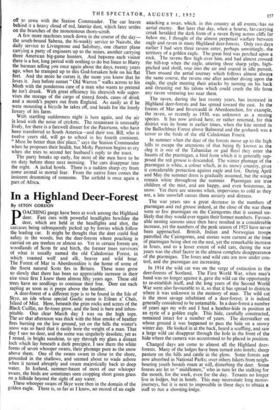 In a Highland Deer-Forest

pOACHING gangs have been at work among the Highland deer. Fast cars with powerful headlights bewilder the deer, which are held in the headlights and shot, the carcases being subsequently picked up by lorries which follow the leading car. It might be thought that the deer could find safety in the woods, but the deer-forests where poaching is carried on are treeless or almost so. Yet in certain forests arei woodlands of Scots fir and birch, the former trees survivors of what is usually named the old Caledonian Forest, in which roamed wolf and elk, beaver and wild boar. The Forest of Mar in Aberdeenshire is the home of some of the finest natural Scots firs in Britain. These trees grow so slowly that there has been no appreciable increase in their size since first I knew them almost fifty years ago. These old trees have no seedlings to continue their line. Deer eat each sapling as soon as it peeps above the heather. A deer-forest of a different type is to be found in the Isle of Skye, an isle whose special Gaelic name is Eilean a' Cheb. Island of Mist. Here, beneath the grim rocks and screes of the Black Cuillin, no fir-trees grow, and the land is bare and inhos- pitable. One clear March day I was on the high tops. The air that afternoon was thick with the blue smoke of heather fires burning on the low ground, yet on the hills the winter's snow was so hard that it easily bore the weight of a man. That day I saw no deer, and the scene was singularly desolate, yet as I rested, in bright sunshine, to spy through my glass a distant loch which lay .beneath a dark precipice, I saw there the white forms of seven whooper swans, their plumage pure as the snow above them. One of the swans swam in close to the shore, grounded in the shallows, and seemed about to wade ashore when it turned abruptly and swam majestically back to deep water. In Iceland, summer-haunt of most of our whooper swans, the birds are sometimes seen cropping short green grass on a hillside beyond the sight of any water.

These whooper swans of Skye were then in the domain of the golden eagle. There is, so far as I know, no record of an eagle attacking a swan, which, in this country at all events,-has no aerial enemy. But later that day, when a hoarse, far-carrying croak heralded the dark form of a raven flying across cliffs far below me, I thought of the almost perpetual warfare between eagle and raven in many Highland deer-forests. Only two days earlier I had seen three ravens enter, perhaps unwittingly, the territory of a golden eagle. The great bird was perched upon a rock. The ravens flew high over him, and had almost crossed the hill-top when the eagle, uttering three sharp yelps, high- pitched and shrill, rose into the air and soared in idle pursuit. Then ensued the aerial tourney which follows almost always the same course, the ravens one after another diving upon the eagle, the eagle meeting their attacks by turning on his back and thrusting out his talons which could crush the life from any raven venturing too near them.

The raven, during the last twenty years, has increased in Highland deer-forests and has spread toward the east. In the forests of Mar and Invercauld in Aberdeenshire, for example, the raven, so recently as 1930, was unknown as a nesting species. It has now arrived here, or rather returned, for this district was its home in earlier times, when the kite nested in the Ballochbuie Forest above Balmoral and the goshawk was a terror to the birds of the old Caledonian Forest.

In summer when the deer of the forests move up to the high hills to escape the attentions of that biting fly known as the deg it is one of the Tabanidae or gad flies) they enter the haunts of the ptarmigan, a bird from which it is generally sup- posed the red grouse is descended. The winter plumage of the ptarmigan is white, a colour which, in its snowy country, gives it considerable protection against eagle and fox. During April and May the summer dress is gradually assumed, but the wings remain white throughout the summer. Ptarmigan are true children of the mist, and are happy, and even boisterous, in snow. Yet there are seasons when, impervious to cold as they are, a late snowfall causes them anxiety and distress.

The war years saw a great decrease in the numbers of ptarmigan and red grouse indeed, at the close of the war there were so few ptarmigan on the Cairngorms that it seemed un- likely that they would ever regain their former numbers. Favour- able nesting seasons since then have resulted in a considerable increase, yet the numbers of the peak season of 1923 have never been approached. British, Indian and Norwegian troops patrolled the Cairngorms, and stories were current at the time of ptarmigan being shot on the nest, yet the remarkable increase in foxes, and to a lesser extent of wild cats, during the war years was the chief factor in the almost complete disappearance of the ptarmigan. The foxes and wild cats are now under con- trol, and the ptarmigan are increasing.

In 1914 the wild cat was on the verge of extinction in the deer-forests of Scotland. The First World War, when man's hand was no longer against it, gave the wild cat the opportunity to re-establish itself, and the long years of the Second World War were also favourable to it, so that it has spread to districts where it was unknown in the memory of man. The wild cat is the most savage inhabitant of a deer-forest; it is indeed generally considered to be untamable. In a deer-forest a number of years ago my wife and I had a heather-hide in position at an eyrie of a golden eagle. This hide, carefully constructed, remained intact for a number of years. The deerstalker on whose ground it was happened to pass the hide on a snowy winter day. He looked in at the back, heard a scuffling, and saw a large wild cat disappear through the hole in the front of the hide where the camera was accustomed to be placed in position.

Changed days are come to almost all the Highland deer- forests. Many of the lodges have been turned into hotels; sheep pasture on the hills and cattle in the glens. Some forests are now absorbed in National Parks; over others hikers from neigh- bouring youth hostels roam at will, disturbing the deer. Some forests are let to " middlemen," who in turn let the stalking for the month, for the week, even for the day. Tenants no longer live in lodges, but in hotels. This may necessitate long motor- journeys, but it is next to impossible in these days to obtain a staff to run a shooting-lodge.