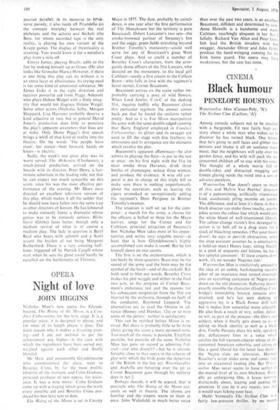 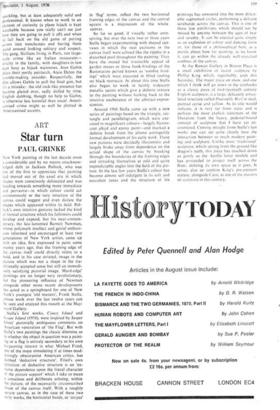 Among comedy subjects not to be touched with a bargepole, I'd rate fairly high story, about a white man who wakes up discover he has turned black. One know. that he's going to pull faces and gibber into mirrors and blame it all on sunlamp treai ment; that the neighbours will yelp over 01, garden fence, and his wife will pack the un- concerned children off to stay with his sister. The thought of a whole movie full 0, double-takes and distracted mugging and frozen glaring sends the mind into a sort o: advance paralysis.

Watermelon Man doesn't spare us much of this, and Melvin Van Peebles' direction is of a pantomiming, artificially vitaminised kind, assiduously piling mumbo on jumbo The difference, and at least it's there, is that a black director can make those touchy, acerb]. jokes across the colour line which would pal,: the white blood of well-intentioned liberal, The colour-change victim's first deranged re- action is to bolt off to a drug stgre for a stock of bleaching remedies. ('Put your hand, down', he says in peevish abstraction, when the shop Assistant assumes he is entertaining a hold-up man.) Hours later, sitting blackl in a pool, of unguents and lotions, he has a last spiteful comment: 'If these creams don't work, it's no wonder Negroes riot.'

Watermelon Man is vindictively amused at the idea of an oafish, backslapping racialist joker of an insurance man turned overnight into an eyerolling caricature of Negro panic down .on the old plantation. Suffering doesn't exactly ennoble the character (Godfrey Cam- bridge's formidable bounce remains unre- strained, and he's last seen shaking an aggressive leg in a Black Power drill hall) but it makes him somewhat more tolerable. He also finds a touch of wry, sullen, defeat- ist wit, as part of the process--the film's real subject, when it finally gets down to it—ot taking on black identity as well as a black skin. Estelle Parsons plays his wife, speaking dry, deflationary lines in a voice which catches the full vacuum-cleaner whine of dis- contented American suburbia, and sitting up like a good liberal for the latest late show— the Negrg---riots on television. Herman Raucher's script slides some real comic rage into an occasional rasping jibe. But Ware,- melon Man never seems to have settled to the mental level of its own blackness. Basic- ally an unforgiving film, it keeps iumning distractedly about, leaping and pawing for attention. If you let it any nearer, you teel it would start licking your face.

Hedri Verneuil's The Sicilian Clan is a fairly low-pressure thriller, by no means

sparkling, but at least adequately solid and professional. It knows when to work in an element of curiosity (a plane hijack is kept aatchable because you really can't see just how they are going to pull it off) and when to fall back on the old game of putting actors into trenchcoats and having them stand around looking solitary and suspect. The gang, Sicilians living in Paris, run large- scale crime like an Italian restaurant— strictly in the family, with daughters-in-law kept busy as hijack waitresses. Jean Gabin plays their portly patriarch, Alain Delon the trouble-making outsider. Respectfully, the film allows Gabin to pull he final gun, but it's a mistake: the old rock-like presence has become glazed over, sadly dulled by time. English dubbing, though no -help to Gabin, is otherwise less harmful than usual. Ameri- canised crime might as well be plotted in Americanised accents.