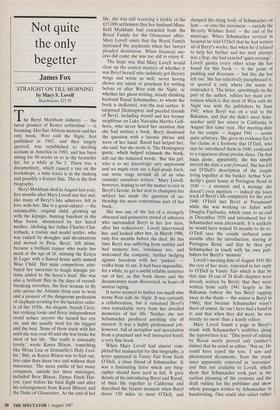 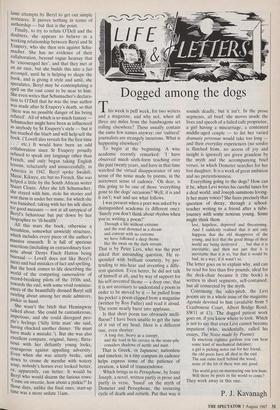 Not quite the only begetter

STRAIGHT ON TILL MORNING by Mary S. Lovell Hutchinson, £15.95 The Beryl Markham industry — the latest product of Kenya settlerdom — is booming. Her fine African memoir and her only book, West with the Night, first published in 1942, and then largely ignored, was republished to dazzling acclaim in America in 1983, and has been sitting for 40 weeks or so in the bestseller list, for a while at No 1. There was a documentary, which caused a run on the bookshops, a mini series is in the making and possibly a feature film. This is the first biography.

Beryl Markham died in August last year, five months after Mary Lovell met her and, like many of Beryl's late admirers, fell in love with her. She is a good subject — the untameable, original child, growing up with the kipsigis, hunting barefoot in the Mau forest, abandoned by her hated mother, idolising her father Charles Clut- terbuck, a trainer and model settler, who was ruined by droughts and devaluations and moved to Peru. Beryl, left alone, became a brilliant trainer who made her mark at the age of 18, winning the Kenya St Leger with a flawed horse aptly named Wise Child. Her male competitors attri- buted her successes to magic kipsigis po- tions added to the horse's feed. She was also a brilliant flier in the days of record- breaking stretches, the first woman to fly solo across the Atlantic from east to west and a pioneer of the dangerous profession of elephant scouting for the lucrative safar- is of the 1930s. An elegant, boyish Circe, her striking looks and fierce independence could seduce anyone she turned her eye on, and she usually went for the biggest and the best. None of them stuck with her until she was over 60 and she was broke for most of her life. 'She really is unusually lovely,' wrote Karen Blixen, 'something like Mona Lisa or Donatello's Holy Ceci- lia.' But, as Karen Blixen was to find out, less calm than these two and without their innocence. The more public of her many conquests, outside her three marriages, included Bror Blixen, Denys Finch Hat- ton, (just before his fatal flight and after his estrangement from Karen Blixen) and the Duke of Gloucester. At the end of her life, she was still receiving a trickle of the £15,000 settlement that her husband Mans- field Markham had extracted from the Royal Family for the Gloucester affair. Mary Lovell omits that the Royal Family increased the payments when her lawyer' pleaded destitution. When financial suc- cess did come she was too old to enjoy it.

The hope was that Mary Lovell would clear up the central mystery of whether it was Beryl herself who suddenly got literary wings and wrote so well, never having shown any talent or penchant for writing before or after West with the Night, or whether her ghost-writing, steady drinking husband Raoul Schumacher, to whom the book is dedicated, was the real author. It surprised Hemingway and puzzled friends of Beryl, including myself and her former neighbour on Lake Naivasha Martha Gell- horn, who never heard her mention that she had written a book. Beryl dismissed the question with a laconic phrase and wave of her hand. Raoul had helped her, she said, but she wrote it. The Hemingway quote, which helped relaunch the book, left out the italicised words, 'But this girl, who is to my knowledge very unpleasant' and we might even say a high-grade bitch, can write rings around all of us who consider ourselves writers.' Mary Lovell, however, hoping to set the matter to rest in Beryl's favour, in her zeal to champion her subject has made the question of au- thorship the most contentious part of her book.

She was one of the last of a strangely obsessed and possessive crowd of admirers who surrounded Beryl in her last days, after her rediscovery. Lovell interviewed her, and looked after her, in March 1986, only five months before she died. By this time Beryl was suffering from senility and bad memory loss, loneliness too, and welcomed the company, further hedging against boredom with her 'pinkies' vodka from 10 am. It had been impossible, for a while, to get a useful reliable sentence out of her, as this book shows and the documentary team discovered, in hours of useless taping.

It never seemed to matter too much who wrote West with the Night. It was certainly a collaboration, but it remained Beryl's own remarkable story from her detailed memories of her life. Neither she nor Schumacher produced anything else of interest. It was a highly professional job, however, full of metaphor and speculation from a practised and well instructed hand; a very fine book.

When Mary Lovell had almost com- pleted her manuscript for this biography, a letter appeared in Vanity Fair from Scott O'Dell, a close friend of Schumacher. It was a fascinating letter which any biog- rapher should have used in full. It gave details of his introducing Beryl and Raoul, of their life together in California and described the bizarre moment when Beryl drove 150 miles to meet O'Dell, and dumped the dying body of Schumacher on him — or onto the pavement — outside the Beverly Wilshire hotel — the end of the marriage. When Schumacher revived in hospital he told O'Dell that he had written all of Beryl's works; that when he'd refused to help her further and her next attempt was a flop, she had exacted 'quiet revenge'. Lovell quotes every other scrap she has found for this book — to the point of padding and diversion — but this she has left out. She has selectively paraphrased it, or quoted it only where she wants to contradict it. The letter, unwittingly on the part of the author, refutes her main con- tention which is that most of West with the Night was with the publishers by June 1941, when Beryl was on a visit to the Bahamas, and that she didn't meet Schu- macher until her return to California in August that same year. Her meeting-date for the couple — August 1941 — seems quite arbitrary. She gives no evidence for it but claims in a footnote that O'Dell, who says he introduced them in 1940, confessed to a vagueness about precise dates. On that basis alone, apparently, she has simply moved the date a year forward. She has left out O'Dell's description of the couple living together at the banker Arthur Van- derlip's guest house at Portugese Bend in 1940 — a moment and a menage she doesn't even mention — indeed she loses track of Beryl's life completely for the year 1940. O'Dell met Beryl at Paramount while she was working on Safari with Douglas Fairbanks, which came to an end in December 1939 and introduced her to Schumacher soon afterwards. It is unlikely he would have waited 16 months to do so. O'Dell says the couple surfaced some months after his introduction, staying at Portugese Bend, and that he then put Schumacher in touch with his own pub- lishers for Beryl's 'memoir'.

Lovell's meeting date of August 1941 fits the rest of her story, repeated in her reply to O'Dell in Vanity Fair which is that by that date 18 out of 24 draft chapters were already written by Beryl; that they were written from early 1941 largely in the Bahamas (where she has Beryl tapping away in the shade — the source is Beryl in 1986); that because Schumacher wasn't there of course, he can't have had a hand in it; and that when they did meet, he was strictly no more than a handy editor.

Mary Lovell found a page in Beryl's trunk with Schumacher's scribbles along the typewritten text. 'This proof of editing by Raoul surely proved only (author's italics) that he acted as editor.' Not so. He could have typed the text. I saw and photostated documents, from the trunk since apparently removed as 'souvenirs' and thus not available to Lovell, which show that Schumacher took part in the earliest planning of the contents and the draft outline for the publisher and show whole passages written by Schumacher in handwriting. One could also select rather

lame attempts by Beryl to get out simple sentences. It proves nothing in terms of authorship — but that is the point.

Finally, to try to refute O'Dell and the doubters, she appears to believe in a working relationship between Beryl and St Exupery, who she then sets against Schu- macher. She has no evidence of their collaboration, beyond vague hearsay that he 'encouraged her', and that they met at an air race, but she builds this into a fait accompli, until he is helping to shape the book, and is giving it style and until, she speculates, Beryl may be contemplating a spell on the east coast to be near to him. She even writes that Schumacher's declara- tion to O'Dell that he was the true author was made after St Exupery's death, so that `there was no possible danger of his being refuted'. All of which is so much fantasy— Schumacher might have been as influenced as anybody by St Exupery's style — but it has reached the blurb and will help sell the book, (`Lovell also reveals for the first time -' etc.) It would have been an odd collaboration since St Exupery proudly refused to speak any language other than French, and only began taking English lessons, reluctantly and unsuccessfully, in America in 1942. Beryl spoke Swahili, Masai, Kikuyu, etc but no French. She was helped a little by the South African writer Stuart Cloete. After she left Schumacher, she stayed with him, stole his stories and sent them in under her name, for which she was banished, taking with her his silk shirts for good measure — not at all untypical of Beryl's behaviour but put down by her biographer to 'ill-health'.

All this mars the hook, otherwise a breathless, somewhat unwieldy structure, which includes every piece of the author's massive research. It is full of specious assertions (including an extraordinary foot- note about Denys Finch Hatton being bisexual — Lovell does not like Beryl's men) and bad mistakes of fact and spelling. But the book comes to life describing the world of the competing camaraderie of record-breaking pilots of the 1930s and, towards the end, with some vivid reminisc- ences of the beautifully dressed Beryl still twirling about among her male admirers, pinkie in hand.

She wasn't the bitch that Hemingway talked about. She could be cantankerous, imperious, and she could disregard peo- ple's feelings (`Silly little man' she said, having chucked another dinner. 'He must have made a mistake.'). But she was also excellent company, original, funny, flirta- tious with her defiantly young looks, Courageous against appalling adversity. Even when she was utterly broke, and down to creme de menthe with watery soup, nobody's horses ever looked better, or, apparently, ran better. It would be Beryl who would disarm the furious rows: Come on sweetie, how about a pinkie?' In those days, unlike the final ones, start-up time was a more sedate 11am.