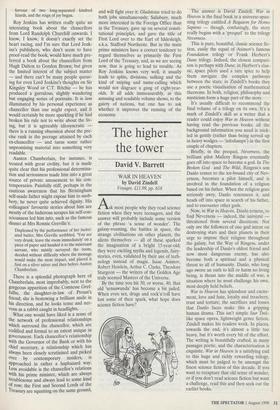 The higher the tower

WAR IN HEAVEN by David Zindell Voyager, £11.99, pp. 618 Ak most people why they read science fiction when they were teenagers, and the answer will probably include some version of the phrase 'a sense of wonder'. The galaxy-roaming, the battles in space, the strange civilisations on other planets, the aliens themselves — all of these sparked the imagination of a bright 15-year-old; they were exciting myths and legends, fairy- stories, even, validated by their use of tech- nology instead of magic. Isaac Asimov, Robert Heinlein, Arthur C. Clarke, Theodore Sturgeon — the writers of the Golden Age truly seemed Masters of the Universe.

By the time you hit 30, or worse, 40, that old `sensawunda' has become a bit jaded. When even sex, drugs and rock'n'roll have lost some of their spark, what hope does science fiction have? The answer is David Zindell. War in Heaven is the final book in a universe-span- ning trilogy entitled A Requiem for Homo Sapiens — though, confusingly, the story really begins with a 'prequel' to the trilogy Neverness.

This is pure, beautiful, classic science fic- tion, easily the equal of Asimov's famous Foundation trilogy or Frank Herbert's Dune trilogy. Indeed, the closest compari- son is perhaps with Dune; in Herbert's clas- sic, space pilots used a rare spice to help them navigate the complex pathways between the stars; in Zindell's books they use a poetic visualisation of mathematical theorems. In both, religion, philosophy and mysticism form a huge part of the story.

It's usually difficult to recommend the final volume of a trilogy on its own. It's a mark of Zindell's skill as a writer that a reader could enjoy War in Heaven without having read the previous books; all the background information you need is trick- led in gently (rather than being served up in heavy wodges — `infodumps) in the first couple of chapters.

Briefly, in the prequel, Neverness, the brilliant pilot Mallory Ringess eventually goes off into space to become a god. In The Broken God and The Wild, Ringess's son Danlo comes to the ice-bound city of Nev- erness, becomes a pilot himself, and is involved in the foundation of a religion based on his father. When the religion goes seriously awry, Danlo renounces it, and heads off into space in search of his father, and to encounter other gods.

Now, in War in Heaven, Danlo returns, to find Neverness — indeed, the universe — threatened from several directions. Not only are the followers of one god intent on destroying stars and their planets in their urge to impose their religion throughout the galaxy, but the Way of Ringess, under the leadership of Danlo's oldest friend and now most dangerous enemy, has also become both a spiritual and a physical threat to all of humanity. Danlo, who long ago swore an oath to kill or harm no living being, is thrust into the middle of war, a situation where he must challenge his own, most deeply held beliefs.

War in Heaven has splendour and excite- ment, love and hate, loyalty and treachery, trust and torture; the sacrifices and losses that Danlo faces make this a gripping human drama. This isn't simple Star Trek- like space opera, lightweight genre fiction. Zindell makes his readers work. In places, towards the end, it's almost a little too heavy, but it's worth every bit of the effort. The writing is beautifully crafted, in many passages poetic, and the characterisation is exquisite. War in Heaven is a satisfying end to this huge and richly rewarding trilogy, which must be judged to be amongst the finest science fiction of this decade. If you want to recapture that old sense of wonder, or if you don't read science fiction but want a challenge, read this and then seek out the earlier books.