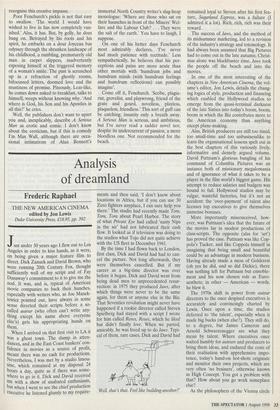 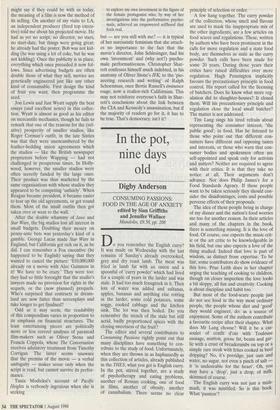 THE NEW AMERICAN CINEMA edited by Jon Lewis Duke University Press, £18.95, pp. 392 Just under 30 years ago I flew out to Los Angeles in order to kiss hands, as it were, on being given a major feature film to direct. Dick Zanuck and David Brown, who were running 20th Century Fox, thought sufficiently well of my script and of Fay Dunaway's commitment to it to give me the nod. It was, and is, typical of American movie companies to back their hunches, especially with writers who, as Joe Manck- lewicz pointed out, have always in some sense directed their scripts before a so- called auteur (who often can't write any- thing except his name above everyone else's) gets his appropriating hands on them.

When I arrived on that first visit to LA it was a ghost town. The slump in atten- dances, and in the East Coast bankers' con- fidence in movies as a source of profit, Meant there was no cash for productions. Nevertheless, I was met by a studio limou- sine, which remained at my disposal 24 hours a day, quite as if there was some- where to go in it. Dick and David received Me with a show of unabated enthusiasm, but when I went to see the chief production executive he listened glumly to my require- ments and then said, 'I don't know about locations in Africa, but if you can use 30 Zero fighters anyplace, I can sure help you there.' The studio had recently made Tora, Tora, Tora about Pearl Harbor. The story of what Private Eye had called 'nasty Nips in the air' had not lubricated their cash flow. It looked as if television was doing to the studios what Tojo did not quite achieve with the US fleet in December 1941.

By the time I had flown back to London, first class, Dick and David had had to can- cel the picture. Not long afterwards, they were themselves cancelled. But if my career as a big-time director was over before it began, Dick and David went from being dead men to unprecedented resur- rection: in 1975 they produced Jaws, after which things were never to be the same again, for them or anyone else in the Biz. That Seventies revolution might never have happened if a rookie director called Steven Spielberg had stayed with a script I wrote for him called Roses, Roses, which he liked but didn't finally love. When we parted, amicably, he was freed up to do Jaws. Typi- cal of them, rare cases, Dick and David had 'Well, that's that. Feel like building another?' remained loyal to Steven after his first fea- ture, Sugarland Express, was a failure (I admired it a lot). Rich, rich, rich was their reward.

The success of Jaws, and the method of its midsummer marketing, led to a revision of the industry's strategy and totemology. It had always been assumed that Big Pictures had to come out in the late autumn; Christ- mas alone was blockbuster time. Jaws took the people off the beach and into the movies.

In one of the most interesting of the chapters in New American Cinema, the vol- ume's editor, Jon Lewis, details the chang- ing logics of style, production and financing which enabled the Hollywood studios to emerge from the quasi-terminal darkness of the late Sixties into today's boom, boom, boom in which the Biz contributes more to the American economy than anything except plane-making.

Alas, British producers are still too timid, too small-time and too unbusinesslike to learn the organisational lessons spelt out in the best chapters of this variously lively, informative and densely argued volume.

David Puttnam's glorious bungling of his command of Columbia Pictures was an instance both of missionary megalomania and of ignorance of what it takes to be a player in the film world's biggest game. His attempt to reduce salaries and budgets was bound to fail. Hollywood studios may be vulgar, wasteful factories, but it's not an accident: the 'over-payment' of talent also licenses top executives to give themselves immense bonuses.

More importantly misconceived, how- ever, was Puttnam's idea that the future of the movies lay in modest productions of class-scripts. The opposite (alas for 'art') has proved the case. Puttnam was like Cop- pola's Tucker, and like Coppola himself in imagining that being small and beautiful could be an advantage in modern business.

Having already made a mess of Goldcrest (oh yes he did, and so did Dickie), there was nothing left for Puttnam but ennoble- ment and his now chosen role as Euro- aesthete; in other — American — words, he blew it.

The 1970s shift in power from auteur directors to the once despised executives is accurately and convincingly charted by Lewis. Once upon a time, the studios deferred to 'the talent', especially when it made big bucks (when else?). They still do, to a degree, but James Cameron and Arnold Schwarzenegger are what they mean by talent. Where executives once waited humbly for auteurs and producers to bring them ideas, and endured the costs of their realisation with apprehensive impo- tence, today's hand-on hot-shots originate and monitor their own projects, which are very often 'no brainers', otherwise known as High Concept. You got a problem with that? How about you go work someplace else?

As the philosophers of the Vienna circle might say if they could be with us today, the meaning of a film is now the method of its selling. On another of my visits to LA, an independent producer (fired top execu- tive) told me about his projected movie. He had as yet no script, no director, no stars, no start-date, but things were going great: he already had the poster. Bob was not kid- ding (he was using a lot of coke, but he was not kidding). Once the publicity is in place, everything which once preceded it now fol- lows. Since advertising budgets are often double those of what they sell, movies are genetically engineered just like any other kind of consumable. First design the kind of fruit you want, then programme the seed.

Jon Lewis and Just Wyatt supply the best essays (and excellent notes) in this collec- tion. Wyatt is almost as good as his editor on mercantile mechanics, though he fails to remark that one of the reasons for the (rel- ative) prosperity of smaller studios, like Roger Corman's outfit, in the late Sixties was that they were unencumbered by the feather-bedding union agreements which the studios — like the British newspaper proprietors before Wapping — had not challenged in prosperous times. In Holly- wood, however, the smaller studios were often secretly funded by the large ones. Their product was thus marketed by the same organisations with whose studios they appeared to be competing 'unfairly'. When Reagan became president, it became easier to tear up the old agreements, or get round them. Most of the small outfits then got taken over or went to the wall.

After the double whammy of Jaws and Star Wars, the big studios lost all interest in small budgets. Doubling their money on penny-ante bets was yesterday's kind of a gamble. George Lucas made Star Wars in England, but California got rich on it, as he did. I can remember a Fox executive (he happened to be English) saying that they wanted to cancel the picture: 110,000,000 already on a movie with Alec Guinness in it! We have to be crazy.' They were too: they had so little foresight that the studio's lawyers made no provision for rights in the sequels, or the (now planned) prequels. Who's surprised that contracts in dream- land are now fatter than screenplays and take longer to get finalised?

Odd as it may seem, the readability of this compendium varies in proportion to its emphasis on financial structures. The least entertaining pieces are politically more or less correct analyses of paranoid film-makers such as Oliver Stone and Francis Coppola, whose The Conversation receives adulatory treatment from Timothy Corrigan. The latter seems unaware that the premiss of the movie — a verbal ambiguity — makes sense only when the script is read, but cannot survive its perfor- mance.

to explore my own investment in the figure of the female protagonist who, by way of her investigations into the performative psycho- male, achieved an empowered selfhood that feels real,

but — are you still with me? — it is typical of her narcissistic feminism that she attach- es no importance to the fact that the movie's director, John Schlesinger, had his own 'investment' and (why not?) psycho- male performativeness. Christopher Shar- rett confesses himself much indebted, in his anatomy of Oliver Stone's JFK to the 'pio- neering research and writing' of Ralph Schoenman, once Bertie Russell's eminence rouge, now a realtor-rich Californian. This may not reinforce everyone's faith in Shar- rett's conclusions about the link between the CIA and Kennedy's assassination, but if the majority of readers go for it, it has to be true. That's democracy, isn't it?