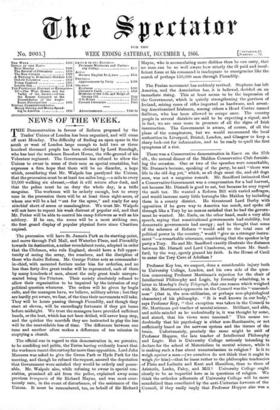 Page 1, 1 December 1866 — The official cue in regard to this demonstration is, we
Close

The official cue in regard to this demonstration is, we

perceive, to be confiding and polite, the Tories having evidently learnt that the workmen resent discourtesyfar more than opposition. Lord John Manners was asked to give the Green Park or Hyde Park for the meeting, and though he refused the request, assured the deputation that Government were satisfied they would be orderly and peace- able. Mr. Walpole also, while refusing to swear in special con- stables, promised all aid from the police, explained away some previous brusguerie of Sir Richard Mayne, and was most cour- teously sure, in the event of disturbance, of the assistance of the Unions. It must be remembered, too, on behalf of Sir Richard

Mayne, who is accumulating more dislikes than he can carry, that no man can be so well aware how utterly the ill paid and insuf- ficient force at his command is inadequate to emergencies like the march of perhaps 150,000 men through Piccadilly.