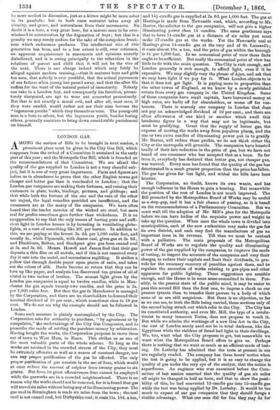 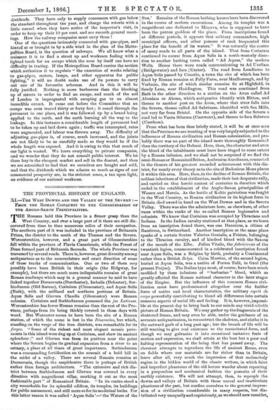 AMONG the notices of Bills to be brought in next session, prominent place must be given to the City Gas Bill, which reappears from the ordeal of a Committee it sustained in the early part of this year ; and the Metropolis Gas Bill, which is founded on the recommendations of that Committee. We are afraid the quality of the gas supplied to London is not a very cheerful sub- ject, but it is one of very great importance. Facts and figures are before us in abundance to prove that the other English towns get cheaper and better gas than is vouchsafed to London ; that the London gas companies are making their fortunes, and ruining their customers in plate, books, bindings, pictures, and gildings ; and that while both the fortune of the one and the ruin of the other. are unjust, the legal remedies provided are insufficient, and the- consumers are at the mercy of the companies. We have often heard that the tender mercies of the wicked are cruel, but mere zeal for profits sometimes goes further than wickedness. It is no exaggeration to say that the only means of having pure and suffi- cient light in London houses is by investing in ventilating globe- lights, at a cost of something like 20/. per burner. In addition to this, we are paying at the lowest 3s. 6d. per 1,000 cubic feet, and usually 4s., while Plymouth, with dearer coal, gives gas at 2s. 9d., and Blackburn, Bolton, and Stockport give gas from cannel coal at 3s. and 3s. 6d. Messrs. Howell and James find that their gas deposits a thin film on all metals, and if this is not removed every day it eats into the metal, and necessitates regilding. It strikes a yellow tint through double paper upon pieces of satin, and takes out the colour of silk. Boots become so rotten that they can be torn up like paper, and analysis has discovered ten grains of oil of vitriol in two inches of leather. The utmost light given by the London gas companies is equal to twelve candles, while in Man- chester the gas equals twenty-two candles, and the price is 3s. per 1,000 cubic feet. But then the gas in Manchester is managed by the Corporation, and there are no shareholders to demand their nominal dividend of 10 per cent., which sometimes rises to 18 per cent. We do not see why the example should not be followed in London.

Some such measure is plainly contemplated by the City. The Corporation asks for authority to purchase, "by agreement or by compulsion," the undertakings of the City Gas Companies, and to prescribe the mode of settling the purchase-money by arbitration. Having bought the works, the Corporation proposes to move them out of town to West Ham, in Essex. This strikes us as one of the most valuable parts of the whole scheme. So long as the works are retained in the crowded streets of the City, they must be extremely offensive as well as a source of constant danger, nor can any proper purification of the gm be effected. The only proper purification of gas consists in the use of lime, which would at once reduce the amount of sulphur from twenty grains to six grains. But from its great offensiveness lime cannot be employed while the gasworks are in a crowded neighbourhood. There is no reason why the works should not be removed, for it is found that gas will travel six miles without losing any of its illuminating power. The gas used in Birmingham is made six miles from the town ; the coal used is not cannel coal, but Derbyshire coal; it costa lls. 10d. a ton,

I and 14i-candle gas is supplied at 2$. 6-1 per 1,000 feet. The gas at Hastings is made from Newcastle coal, which, according to Mr. Baxter, the solicitor to the gas companies, will not give a higher illuminating power than 14 candles. The same gentleman says that to have 14-candle ga,s at a distance of six miles you must make 17-candle gas at the works. Yet the Inswcastle coal at Hastings gives 14-candle gas at the very end of St. Leonard's ; it costa almost 19s. a ton, and the price of gas within the borough. is 4s. per 1,000 feet. In an economical point of view these facts ought to be sufficient. But really the economical point of view has little to do with the main question. The City is rich enough, and London generally is rich enough, to afford light, even if it be expensive. We may slightly vary the phrase otAjax, and ask that we may have light if we pay for it. What London objects to is that it does not get light. It is paying more in proportitm than the other towns of England, as we know by a newly published return from every gas company in the United Kingdom. Some of these companies have small capitals, have borrowed money at high rates, are badly off for shareholders, or worse off for cus- tomers. There is scarcely one company in Lenden that dge,s not pay an acknowledged dividend of 10 per cent., and there are often allowanc of one kind or another which swell this handsome figure in a way that may not be legitimate, but must be gratifying. Grant that the pup& of better gas, the expense of moving the works away from pop pious placee, and the one or two extra candles of illuminating power put in to gratify Mr. Baxter, will reduce these profits, we do not think either the City or the metropolis will grumble. The companies have boasted loudly of their late reduction in the price of gas, but we have not heard of one consumer who has accepted that as a boon. So far, from it, everybody has declared that better gas, not cheaper gas, was wanted. Every man has found that the quality of the gas has deteriorated in a much greater proportion than the price has fallen. The gas has given far less light, and withal the bills have been. heavier.

The Corporation, no doubt, knows its own wants, and has enough influence in the House to gain a hearing But meanwhile the position of the rest of London is not mi.& improved. The Bill promoted by the Metropolitan Board of Work § may be useful as a stop-gap, and it has a fair chance of passing, as it is based on the recommendations of a Parliamentary Committee. But we must wait till the adoption of Mr. Mill's plan for the Metropolis before we can have bodies of the requisite power and weight to take up the question. When once the whole town is divided into municipalities, each of the new authorities may make the gas far its own district, and each may find the manufacture of gas an important item in its revenue. Till then we must be content with a palliative. The main proposals of the Metropolitan Board of Works are to regulate the quality and illuminating power of the gas supplied by the companies, to improve the mode of testing, to inspect the accounts of the companies and vary their charges, to reduce their capitals and limit their dividends, to pro- vide for the summary recovery of penalties against them, and to regulate the execution of works relating to gas-pipes and'other apparatus for public lighting. These suggestions are sensible enough, and the House is in some sense committed to them. Pos- sibly, in the present state of the public mind, it may be easier to pass this second Bill than the first one, to impose a check on our present tyrants than to transfer their powers to a body of which some of us are still suspicious. But there is no objection, so far as we can see, to both the Bills being carried, those sections only of the second being struck out which refer to the City. The City has its constituted authority, and even Mr. Mill, the type of a revolu- tionist to many innocent Tories, does not propose to touch it. But while we admire the workings of a new Gas Act in the City, the rest of London surely need not be in total darkness, like the Egyptians while the children of Israel had light in their dwellings. We, too, want what the City proposes to get, but meanwhile we want what the Metropolitan Board offers to give us. Perhaps there is nothing that we want so much as an efficient mode of test- ing. Dr. Letheby has admitted that the tests at present in use are regularly evaded. The company has three hours' notice when the test is going to be applied, but it is so easy to change the quality of gas under the very eye of the analyst, that the notice is superfluous. An engineer who was examined before the Com- mittee of last session asserted that the quality of gas six miles off might be changed in half an hour, and that to show the possi- bility of this, he had converted 12-candle gas into 15-candle gas while the test was being applied by Dr. Letheby. It would be too much to expect of our gas companies that they should forego a similar advantage. What one man did for fun they may do for dividends. They have only to supply consumers with gas below the standard throughout the year, and charge the retorts with a little cannel when they have notice of the inspector's visit, in order to keep up their 10 per cent, and see smooth general meet- ings. How the railway companies must envy them One of the questions intimately connected with gas-pipes, and hinted at or brought in by a side wind in the plan of the Metro- palitan Board, is the question of subways. We all know what nuisance it is to find a street up and workmen feeling with a lighted torch for an escape which the nose by itself can have no difficulty in tracing. If the Metropolitan Board carries the section which authorizes it to regulate "the execution of works relating to gas-pipes, meters, lamps, and other apparatus for public lighting," it will no doubt make use of its powers to carry -out one of its favourite schemes. And in this it, will be fully. justified. Nothing is more barbarous than the blocking up of streets in order to find an escape, and much of the soil of London is impregnated with escaping gas to an almost incredible extent. It came out before the Committee that an escape was once traced thirty or forty feet ; it oozed through the pavement in one place, and it was followed up by a brand being applied to the earth, and the earth burning all the way to the leakage. In this instance a considerable length of pavement had to be taken up and laid down again ; traffic was intercepted, rates 'were augmented, and labonr was thrown away. The difficulty of adjusting gas-pipes is, of course, much increased, and the joints are not likely to be as carefully made as they would be if the whole length was exposed. And it is owing to this that much of our light is wasted. We leave everything to private companies, and we wonder that they do not consult public interest. We let them buy in the cheapest market and sell ha the dearest, and then we are astonished to find that we ourselves are bought and sold, and that the dividends which we admire so much as signs of our .commercial prosperity are, in the strictest sense, a tax upon light, an evidence of our national weakness.