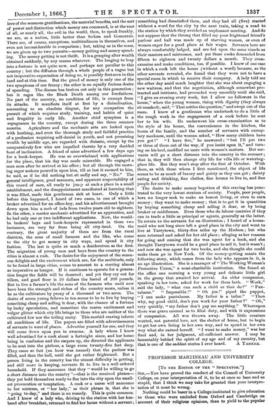 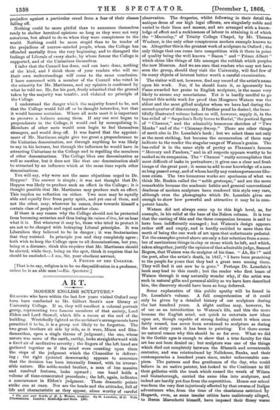 [To THE EDITOR OF THE "SPECTATOR."] SIR,—Yon have proved the conduct of the Council of University College, on your interpretation of it, to be at once so base and so stupid, that I think we may take for granted that your interpre- tation of it must be wrong.

Nothing could be baser in a College instituted to give education to those who were excluded from Oxford and Cambridge on account of their religious opinions, than to yield to the popular

prejudice against a particular creed from a fear of their classes falling off. Nothing could be more pitiful than to announce themselves ready to shelter heretical opinions so long as they were not very notorious, but afraid to do so when they were conspicuous to the world. Nothing could be more stupid than to be tender of the prejudices of narrow-minded people, whom the College has offended mortally from the very beginning, and to disregard the feelings of Liberals of every shade, by whose favour the College is supported, and of the Unitarians themselves. I infer that the Council has done, and can have done, nothing of the kind, and I think those of your readers who will use their own understandings wilr come to the same conclusion. I have conversed with a member of the Council who voted in the minority for Mr. Martineau, and my opinion is confirmed by what he told me. He, for his part, freely admitted that the ground taken by the majority was tenable, and violated no principle of the College. I understand the danger which the majority feared to be, not that the College would fall off or be thought heterodox, but that it would become sectarian. Where all sects meet it is important to preserve a balance among them. If any one sect began to preponderate in the College, it would end by monopolizing it. Members of other sects would soon begin to feel themselves strangers, and would drop off. It was feared that the appoint- ment of Mr. Martineau might give too great a preponderance to the Unitarian denomination, not through anything he was likely to say in his lectures, but through the influence he would have in attracting Unitarians to the College and in repelling the members of other denominations. The College likes one denomination as well as another, but it does not like that one denomination shall be attracted by an influence which at the same time repels other denominations.

You will say, why were not the same objections urged to Dr. Hoppus ? The answer is simple ; it was not thought that Dr. Hoppus was likely to produce such an effect in the College ; it is thought possible that Mr. Martineau may produce such an effect. This implies no reflection on either. Two men may be equally able and equally free from party spirit, and yet one of them, and not the other, may, wherever he comes, draw towards himself a certain class of people and repel another class.

If there is any reason why the College should not be protected from becoming sectarian and thus losing its raison d'être, let us hear what it is. But whatever it may be, those who tried to protect it are not to be charged with betraying Liberal principles. It was Liberalism they believed to be in danger ; it was Sectarianism that they resisted. In principle you and they completely agree ; both wish to keep the College open to all denominations, but you, being at a distance, think this requires that Mr. Martineau should be elected, while they, being on the spot, think it requires that he should be excluded.—I am, Sir, your obedient servant, A. FRIEND OF THE COLLEGE. [That is to say, religion is to be no disqualification in a professor, unless he is an able man !—En. Spectator.]