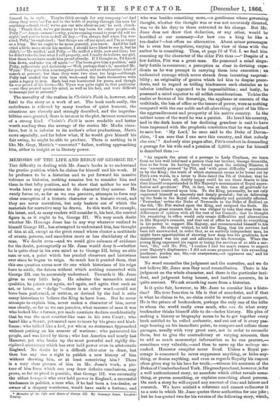 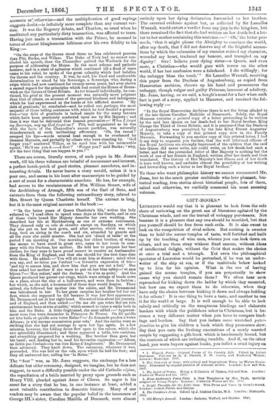 MEMOIRS OF THE LIFE AND REIGN OF GEORGE III.* THE

No word reconciles the judgment and the narrative, and we do not believe Mr. Jesse sees they need reconciliation. There is his judgment on the whole character, and there is the particular inci- dent, and judgment being honest, and incident accurate, he is quite content. We ask someth lag more from a historian.

Is it quite fair, however, to Mr. Jesse to consider him a histo- rian? His true function in life is that of anecdotist, and if that is what he claims to be, no claim could be worthy of more respect. He is the prince of bookmakers, perhaps the only one of the tribe to whom the world really owes much, who can do what every bookmaker thinks himself able to do—index history. His plan of making a history or biography seems to be to get together every book entitled to be called authentic, and cut out of it every pas.- sage bearing on his immediate point, to compare and collate those passages, usually with very great care, not in order to reconcile them, but to give the contradictory or varying accounts, then to add as much manuscript information as he can procure,— sometimes very valuable,—and then to serve up the melange un- cooked. Honester compiler never lived. Unless a Royal per- sonage is concerned he never suppresses anything, or bides any- thing, or denies anything, and even as regards Royalty his respect often gives way to his love for truth ;—witness his accounts of the Dukes of Cumberland and York. Hisgrandpenchant, however, is for a well authenticated story, an anecdote which either reveals some- thing, or proves something, or explains something about persons. On such a story he will expend any amount of time and labour and research. We have mislaid a reference and cannot rediscover it to a note in which Mr. Jesse quotes three authorities for one joke ; but he has quoted two for his version of the following story, which,

accurate or: otherwise—and the multiplication of good sayings suggests doubt—is infinitely more complete than any current ver- sion. It was the Regency debate, and Thurlow, as usual when he meditated any particularly dirty transaction, was affected to tears. Having just made a transaction with the Prince, he moaned in terms of almost blasphemous loftiness over his own fidelity to his King :—

entirely upon her dying declaration forwarded to her brother. The external evidence against her, as collected by Sir Lascelles Wraxall, would extort a verdict from any jury in the kingdom, but there remained the fact that she had written on her deathbed a let- ter to her mother containing this sentence :—" the letter pro- ceeds, that it might please the Almighty to convince the world, after my death, that I did not deserve any of the frightful accusa- tions by which the calumnies of my enemies stained my character, wounded my heart, traduced my honour, and trampled on my dignity ! Sire ! believe your dying sister—a Queen, and even more, a Christian—who would gaze with terror on the other world, if her last confession were a falsehood. I die willingly ; for the unhappy bless the tomb." Sir Lascelles Wraxall, receiving this paper from the Duchess of Augustenburg, as copied front Hanoverian archives, throws up his hand and pronounces the unhappy, though vulgar and guilty Princess, innocent of adultery. Mr. Jesse, having, as we said, a beagle's scent for a fact when such fact is part of a story, applied to Hanover, and received the fol- lowing reply :— "In the Royal Hanoverian Archives there is not the letter alluded to of the late Queen Caroline Mathildo of Danemark. Solely, the Royal Museum contains a printed copy of a letter pretending to be written by the said late Queen on her death-bed to her Royal brother, King George the Third of Great Britain, and it is presumed that the Duchess of Augustenburg was permitted, by tho late King Ernest Augustus' Majesty, to take a copy of this printed copy now in tho Family Museum. Forwarding to you another copy of this printed letter, I feel it any duty to acquaint you further, that the well informed officers of the Royal Archives are strongly impressed of the opinion that the said late Queen did never write, nor could write, on her death-bed such a letter, and that the pretended letter of Her Majesty is nothing but the work of one of her friends in England, written after her death and then translated. The history of Her Majesty's last illness and of her death is here well known, and excludes almost the possibility of her writing and forwarding such a letter to her Royal brother."

To those who want philosophic history we cannot recommend Mr. Jesse, but to the much greater multitude who love pleamat, torical reading, true stories about historical people, Iota of them, salted and otherwise, we cordially commend his most summing volumes.