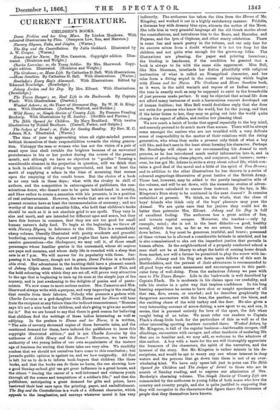 The time of year is approaching when all right-minded persons bethink themselves of their responsibilities towards the rising genera- tion. Unhappy the man or woman who has not the vision of a pair of small eyes that shall twinkle the brighter because of an unwonted protuberance in his or her pocket during the course of the present month, and although we have no objection to " goodies " forming a considerable element in the projection in question, still we think that a book in addition will always be appreciated, and has at least the merit of supplying a solace in the time of mourning that ensues upon the emptying of the comfit boxes. But the choice of a book is no easy task in these days ; what with the rivalry in skill of authors, and the competition in extravagance of publishers, the con- scientious donor, who doesn't care to be quite behind-hand in novelty, and likes rather to create a sensation with his presents, is in a position of real embarrassment. However, the works that are on our list on the present occasion have at least the recommendation of economy ; and are worthy of the attention of sensible folks, who hold that children's books should be such as it is not absolute grief to see spoilt. They vary in size and merit, and are intended for different ages and sexes, but they have this feature in common, that they are not too good for small human nature's daily food. To begin at the beginning, we throw off with Nursery Rhymes, in deference to the title. This is a remarkably cheap volume, liberally illustrated with pretty woodcuts and graceful bordering, containing the rhymes and jingles that have delighted suc- cessive generations—the Shakespeare, we may call it, of those small personages whose familiar genius is the nursemaid, whose dii majores are papa and mamma, and whose daily life is rounded with a sleep that sets in at 7 p.m. We will answer for its popularity with them. Sur- passing it in brilliancy, though not in grace, Dame Perkins is a formid- able rival. Her adventures in the hunting-field have a pleasant smack of Johnny Gilpin about them; and the humorous designs of Phi; and the bold colouring with which they are set off, will prove very attractive to the age that is beginning to turn up its nose at the simple joys of the nursery, and is just awakening to the delights of ponies and of panto- mimes. We now come to more serious matter. Mrs. Cameron and Mrs. Sherwood always write with a purpose, and very improving is the reading that results from their labours. Nobody who presents a godson with Charles Lorraine or a god-daughter with Emma and her Nurse will hear from the recipient at any future time the indirect remonstrance, "Mamma says it's not a nice book for children, and she's going to give me another for it." But we are bound to say that there is good reason for believing that children find the writings of these ladies interesting as well as edifying. In the preface to Emma and her Nurse, it is written, "The sale of seventy thousand copies of these favourite tales, and the continued demand for them, have induced the publishers to issue this copyright illustrated edition ;" and is not Charles Lorraine by the authoress of Little Henry and his Bearer? Moreover, we have the authority of two young ladies of our own acquaintance of the mature age of fourteen for stating that these tales are very nice. We Candidly confess that we should not ourselves have come to this conclusion ; but juvenile public opinion is against us, and we bow resignedly. All that is left for us to do is to inform book-buyers that children like these books, and that the books can do them no harm, the one showing how

a good Sunday-school girl get great influence in a great house, and the others "tracing the career of a well informed and virtuous youth through all the scenes and temptations of a soldier's life ;" and that the publishers, anticipating a great demand for gifts and prizes, have bestowed their best care upon the printing, paper, and embellishment. The Boy and the Constellations is a work of a different character, which appeals to the imagination, and conveys whatever moral it has very indirectly. The authoress has taken the idea from the Heroes of Mr. Kingsley, and worked it out in a highly satisfactory manner. Fridolin, a German boy with dreamy blue eyes, attracts the notice of the Moon.

She tells him in very graceful language all the old Greek stories about the constellations, and introduces him to the Bears, and Hercule; and Pegasus, and the lyre of Orpheus, and other starry celebrities. There is some fun and much poetry in the volume, and our only fear for its success arises from a doubt whether it is not too deep for the children and not quite wise enough for the grown-up folks. The illustrations are pleasing, the paper and printing luxurious ; the binding is handsome, if the condition be granted that a book is always to lie with the same side uppermost. Miss Bell, like Mrs. Sherman, interlards her fiction plentifully with religious instruction of what is called an Evangelical character, and her tales form a fitting sequel in the course of training which begins with Emma and her Nurse. The Grahams and Home Sunshine bask, as it were, in the mild warmth and repose of an Indian Bummer; the tone is exactly such as may be supposed to exist in the households of just persons made perfect. It may be objected that actual life does not afford many instances of such a harmonious concert developed out of human frailties; but Miss Bell would doubtless reply that she does not write for perfume who know the world, but for the young, and that if the latter listen to her, they may on going out into the world quite change the aspect of affairs, and realize her pleasing ideal.

We now reach a hatch of books that appeal especially to the boy mind, and scarcely pretend to do much more than amuse. There will be always some amongst the seniors who are not troubled with a very delicate sense of responsibility in the matter of their relations with the rising generation, who when they make a present only think of what a boy will like, and don't care in the least about forming his character. Perhaps

Mr. Routledge will object to our recommending his Annual to such persons, as he has introduced much useful information into it, and is desirous of producing chess-players, and conjurors, and turners ; more- over, he has got Mr. Adams to,write a story about school life, which con- tains a good deal of the moral and a little of the spirit of Tom Brown; and in addition to the other illustrations ho has thrown in a series of coloured engravings illustrative of great battles of the British Army. These last, however, may be added to the purely imaginative side of the volume, and will be set down, with the numerous stories of adven- ture, as more calculated to amuse than instruct. By the bye, is Mr. Kingston's Eton story to be continued in the next Annual ? It remains unfinished at present. We think, on the whole, that the class of boys' friends who think only of the boys' pleasure may pass the Annual. We are quite sere that for juniors they could not do better than patronize Mrs. Eiloart. Johnny and his Dog Is full of excellent fooling. The authoress has a great notion of fan, and invents capital scrapes. Moreover, she teaches — only by example, mind ; she is not in the least didactic—a good, healthy moral, which has not, as far as we are aware, been clearly laid down before. A boy must be generous, truthful, and brave ; possessed of these virtues he is allowed a considerable latitude in mischief, and he is also commissioned to eke out the imperfect justice that prevails in human affairs. In the neighbourhood of a properly conducted school a man shall not be at liberty to adopt the habit of coming home drank from market, nor will a farmer be permitted to play the screw with im- punity. Johnny and his Dog are down upon fellows of this sort in Hertfordshire, and the perusal of their adventures is recommended to all good boys who want amusement and encouragement in this parti- cular form of well-doing. From the audacious Johnny we pass with ease to The Texan Ranger. Life in the backwoods is well described by Captain Flack. Ho is moderate in his claims upon our credulity, and tells his stories in a quiet way that inspires confidence. In his long hunting experience he seems to have shot or caught specimens of all that ran, flew, swum, or crawled ; and he describes graphically the dangerous encounters with the bear, the panther, and the bison, and the exciting chase of the wild turkey and the deer. Ho also gives a very interesting account of arrow-fishing, a new sport to us, and one, it seems, that is pursued entirely for love of the sport, the fish when caught being of no value. We must refer our readers to Captain Flack's cheap little book for the particulars of this as well as of the other interesting sporting matters recorded there. Washed Ashore, by Mr. Kingston, is full of the regular business—hairbreadth escapes, cliff climbing; encounters with savages, and other incidents of seafaring life that are so familiar and, we may add, so welcome to the admirers of this author. A boy with a taste for the sea will thoroughly appreciate the humours of the characters, the spirit of the narrative, and the interest of the story. But Mr. Kingston is rather minute in his de- scriptions, and would be apt to weary any one whose interest in deep waters and the persons that go down into them is not of an over- whelming kind. We have only space left just to point out The Bible Opened for Children and The Judges of Israel to those who are in search of Sunday reading, and to express our admiration of Mrs. Broderip's charming volume. The Simple Stories of Country Life are commended by the authoress to young folks of both sexes who love the country and country people, and she is quite justified in supposing that they will recognize in the characters that figure there the likenesses of people that they themselves have known.