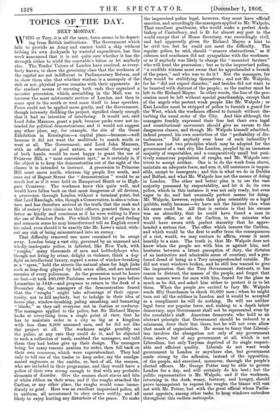 WHIG or Tory, it is all the same, force seems to be depart- ing from British institutions. The Government which fails to provide an Army and cannot build a ship without

bribing its own dockyards by wasteful expenditure, has this week announced that it is not quite sure whether it has the strength either to wield the constable's baton or let anybody else. The Trades' Unions of London have resolved, as every- body knows, to show the governing class that the workmen of the capital are not indifferent to Parliamentary Reform, and to show them also that whether wisdom is a monopoly of the rich or not, physical power remains with their opponents. As the readiest means of securing both ends they organized a monster procession, which, assembling in the Mall, was to traverse the most aristocratic section of London, and then in some spot to the south or west mass itself to hear speeches. Force could not be applied more gently, and the Government, though intensely disliking the project, signified clearly enough that it had no intention of interfering. It would not, said Lord John Manners, grant a park, because parks were not in- tended for political demonstrations, and it would not suggest any other place, say, for example, the site of the Great Exhibition in Kensington—a capital place—because—well because it did not want the multitude to march south or west at all. The Government, said Lord John Manners, with an effusion of good nature, a mental throwing out of both hands, would be most happy to grant the use of Primrose Hill, a "most convenient spot," as it certainly is, if the object is to keep the demonstration out of the sight of the classes it is intended to instruct. A procession to Primrose Hill must move north, whereas big people live south, and once out of Regent Street the " demonstration " would be as much lost as if it were held on Hampstead Heath or in High- gate Cemetery. The workmen knew this quite well, and would have fallen back on that most dangerous of all devices, a procession through London without a terminal point, but that Lord Ranelagh, who, though a Conservative, is also a volun- teer, and has therefore arrived at the truth that the rank and file of society have claims on their officers, granted them in a letter as kindly and courteous as if he were writing to Peers the use of Beaufort Park. For which little bit of good feeling and common sense he may henceforward tell an English crowd his mind, even should it be exactly like Mr. Lowe's mind, with- out any risk of being misconstrued into an enemy.

That difficulty removed one more remained to be swept away. London being a vast city, governed by an unarmed and wholly inadequate police, is infested, like New York, with "roughs," many thousands of men and hobbedyhoys who, though not living by crime, delight in violence, think a dog- fight an intellectual luxury, regard a scene of window-breaking as a "spree," hold the streets the natural place for high jinks such as leap-frog played by both sexes alike, and are natural enemies of every policeman. As the procession must be hours on foot—it took 400,000 Parisians seven hours to pass before Lamartine in 1848—and proposes to return in the dusk of a December day, the managers of the demonstration feared that the " roughs " might take advantage of their oppor- tunity, not to kill anybody, but to indulge in their idea of horse play, window-breaking, paling smashing, and bonneting "blacks," as they cell everyone not in fustian or corduroy. The managers applied to the police, but Sir Richard Mayne looks at everything from a single point of view, that he has to maintain order in a city as big as a kingdom with less than 8,000 unarmed men, and he did not like the' project at all. The workmen might possibly eat the police, at any rate they could do it, and he objected to such a collection of teeth, snubbed the managers, and told them they had better give up their design. The managers being for many reasons anxious for order, then fell back on their own resources, which were superabundant. They had only to tell one of the trades to keep order, say the amalga- mated engineers, or the smiths, or, best of all, the seamen, who are included in their programme, and they would have a police of their own strong enough to deal with any probable elements of disorder. Give the seamen short staves and bits of white ribbon on their arms, and if the roughs attacked the Carlton, or any other place, the roughs would come imme- diately to grief. Here was an excellent improvised police, all in uniform, all accustomed to obey orders swiftly, and all likely to enjoy hurting any disturbers of the peace. To make the improvised police legal, however, they must have officiat sanction, and accordingly the managers applied to Mr. Walpole.

That excellent gentleman, who would make a perfect Arch- bishop of Canterbury, and is fit for almost any post in the world except that of Home Secretary, was exceedingly civil, and had apparently given Sir Richard Mayne a hint to' be civil too, but he could not meet the difficulty. The regular police, he said, should "remove obstructions," as if cabmen and coachmen did not sympathize with the workmen or as if anybody was likely to charge the "mounted farriers"' who will head the procession ; but as to the improvised police, "a credible witness must swear that he apprehended a breach of the peace," and who was to do it Not the managers, for they would be stultifying themselves ; and not Mr. Walpole,. for he "did not expect disorder," and besides did not want to be taunted with distrust of the people ; so the matter raust be left to Sir Richard Mayne. In other words, the line of the pro-

cession must be left without special guardianship, except that of the angels who protect weak people like Mr. Walpole ; or East London must be stripped of police to furnish a guard for the West, which the workmen offered to furnish without dis- turbing the usual order of the City. And this although the managers frankly expressed their fear lest their own legal and constitutional movement should give an excuse to the dangerous classes, and though Mr. Walpole himself admitted, indeed pressed, his own conviction of the "probability of dis- turbances." Did anybody ever hear of such imbecility t There are just two principles which may be adopted for the government of a vast city like London, peopled by an immense majority of respectables, and a comparatively small but posi- tively numerous population of roughs, and Mr. Walpole con- trives to accept neither. One is to do the work from above,. maintain an adequate force, and arm it, till resistance is impos- sible, except to insurgents ; and this is what we do in Dublin and Belfast, and what Mr. Walpole has not the means of doing in London. The other and better plan is to use the vast majority possessed by respectability, and let it do its owIr police, which in this instance it was not only ready, but even= eager to do, and had unusually perfect means for doing. Mr. Walpole, however, rejects that plan ostensibly on a legal quibble, really because—we have not the faintest idea what his cause could be. All that is certain is that his excuse was an absurdity, that he could have found a man in his own office, or at the Carlton, in five minutes who- would have sworn with perfect sincerity that he appre- hended a serious riot. The office which insures the Carlton, and which would be the first to suffer from the consequences. of a riot, would, we may venture to affirm, swear it most heartily to a man. The truth is, that Mr. Walpole does not know when the people are with him or against him, and hesitates between a latent sperception of duty, the dictates of an instinctive and admirable sense of courtesy, and a pro- found dread of being as a Tory misapprehended outside. He did not want windows broken, and he still less wanted to give the impression that the Tory Government distrusts, or has reason to distrust, the masses of the people, and forgot that these masses were for once with him, feared for the glass as much as he did, and asked him either to protect it or to let them. When the people are excited to fury Mr. Walpole sends fifty Guardsmen to check 50,000 men ; when he might turn out all the soldiers in London and it would be accepted as a compliment he will do nothing. He will use neither legal force nor popular force, and, sinking to a depth below democracy, says Government shall not be represented even by the constable's staff. American democrats, who hold as an abstract principle that Government should be reduced to a minimum, draw their line there, but he will not even allow that much of organization. He seems to fancy that Liberal- ism involves the abnegation not only of any government from above, but of any government at all, which is not Liberalism, but only Toryism deprived of its single respect,- able and efficient quality. Liberals do not want weal government in London or anywhere else, but government made strong by the adhesion, instead of the opposition, of the people, and exercised, moreover, through the people's elected officers. Mr. George Potter may be able to govern London for a day, and will certainly do his best ; but the public representative is Mr. Walpole, and if -the workmen, returning in the dusk, weary, footsore, and hungry, should prove incompetent to repress the roughs, the blame will rest not with Mr. Potter, but with the great official whom Parlia- ment appoints, among other tasks, to keep windows unbroken throughout this endless metropolis.