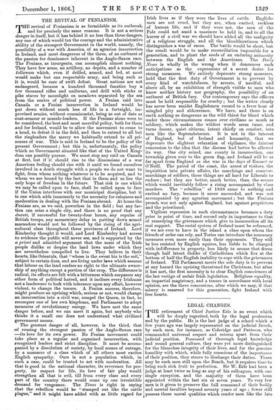 revival of Fenianism is as formidable as its outbreak,

and for precisely the same reasons. It is not a serious danger in itself, but it has behind it no less than three dangers, any one of which would tax the courage and the administrative ability of the strongest Government in the world, namely, the possibility of a war with America, of an agrarian insurrection in Ireland, and most dangerous of the three, of an outburst of the passion for dominance inherent in the Anglo-Saxon race. The Fenians, as insurgents, can accomplish almost nothing. They have few arms, no artillery, no depots, and a number of followers which, even if drilled, armed, and led, at most 'would make but one respectable army, and being such as it is, would be sure of swift defeat. Great nations are not endangered, because a hundred thousand fanatics buy a few thousand rifles and uniforms, and drill with sticks or pike staves by moonlight on meadows separated by the sea from the centre of political power. A Fenian raid into Canada or a Fenian insurrection in Ireland would be pat down without much loss of life in a fortnight, im- provised armies, without commissariat, being as out of date as coat-armour or muzzle-loaders. If the Fenians alone were to be considered, the best and most merciful policy, both for them and for Ireland, would be to allow the movement to come to a head, to defeat it in the field, and then to extend to all but the ringleaders the mercy we habitually extend to all pri- soners of war. This is said in Ireland to be the policy of the present Government ; but this is, unfortunately, the policy which no Government situated like that of the United King- dom can possibly pursue. We must stop any raid on Canada at first, lest if it should rise to the dimensions of a war American feeling should rise with it until we found ourselves involved in a death struggle with a people we do not want to fight, from whom nothing whatever is to be acquired, and to -whom we are bound by the fact that in them and us lies the only hope of freedom in the future. That risk is one which we may be called upon to face, shall be called upon to face if the Union interferes with our municipal discipline, but it is one which adds immensely to the necessity for calmness and inoderation in dealing with the Fenians abroad. At home the .Fenians are, as we said, powerless in the field ; but any fac- tion can seize a single city, and there is no proof that any ermeute, if successful for- twenty-four hours, any repulse of British troops, any momentary delay in putting down armed marauders would not be followed by the rising of the agri- -cultural class throughout three provinces of Ireland. Lord Kimberley thought it would, and Lord Kimberley had access to evidence the public will never see, and is supported by the a priori and admitted argument that the mass of the Irish people dislike or despise the land laws under which they are nevertheless compelled to live. They believe in their hearts, like Orientals, that "whose is the sweat his is the soil," subject to certain dues, and are living under laws which assume that labour on the land confers no right to the ultimate owner- ship of anything except a portion of the crop. The difference is radical, its effects are felt with a bitterness which surpasses any other form of political hatred, and it inclines every Irishman mot a landowner to look with tolerance upon any effort, however violent, to change the tenure. A Fenian success, therefore, might produce an uprising which, serious or not, would change an insurrection into a civil war, compel the Queen, in fact, to reconquer one of her own kingdoms, and Parliament to adopt measures of revolutionary energy. We have met the same danger before, and we can meet it again, but anybody who thinks it a small one does not understand what civilized government means.

The greatest danger of all, however, is the third, that of rousing the strongest passion of the Anglo-Saxon race —its love for its own power. No Fenian movement could take place as a regular and organized insurrection, with recognized leaders and strict discipline. It must be accom- panied by a dissolution of society, by local scenes of outrage, hy a massacre of a class which of all others most excites _English sympathy. Ours is not a population which, in such a case, could be trusted to act with moderation. All that is good in the national character, its reverence for pro- perty, its respect for life, ,its love of fair play would strengthen all that is evil, till from every class and every part of the country there would come up one irresistible demand for vengeance. The Times is right in saying that the rebellion would be "stamped out like the cattle plague," and it might have added with as little regard for Irish lives as if they were the lives of cattle. English- men are not cruel, but they are, when excited, reckless of human life, and if they were not, the men of the Pale could not amid a massacre be held in, and, to all the horror of a civil war we should have added all the malignity of a religious struggle, and all the bloodthirstiness which distinguishes a war of races. The battle would be short, but the result would be to make reconciliation impossible for a generation, and to plant the seeds of an enduring animosity between the English and the Americans. The Daily News is wholly in the wrong when it denounces such anticipations as the expressions of a secret desire for strong measures. We entirely deprecate strong measures, hold that the first duty of Government is to prevent by every kind of watchfulness, by arrests, if needful, and above all, by an exhibition of strength visible to men who know neither history nor geography, the possibility of an outburst of British fury. Our contemporary says the officers must be held responsible for cruelty ; but the writer clearly has never been amidst Englishmen roused to a fever heat of mingled pity and abhorrence. We have, and there is on earth nothing so dangerous as the wild thirst for blood which under those circumstances comes over civilians as much as soldiery, which makes the wildest words seem tame, and turns decent, quiet citizens, intent chiefly on comfort, into men like the Septembriseurs. It is not in the interest of England, but of Ireland and humanity, that we deprecate the slightest relaxation of vigilance, the faintest concession to the idea that the disease had better be allowed its way. One city seized, one county in insurrection, one township given over to the green flag, and Ireland will be as far apart from England as she was in the days of Emmet or O'Neill. The patrol of the coast, the arrest of visitors, the inquisition into private affairs, the marchings and counter- marchings of soldiers, these things are all hard for Liberals to endure ; but they are better, much better, than the scenes which would inevitably follow a rising accompanied by class murders. The "rebellion" of 1848 came to nothing and excited no fury, because it never succeeded, and was not accompanied by any agrarian movement ; but the Fenians preach war not only against England, but against proprietors and the priesthood.

Vigilant repression in such circumstances becomes a duty prior in point of time, and second only in importance to that of remedying the grievances which give to insurrection all its real support. The social system of Ireland•must be reformed, if we are ever to have in the island a class upon whom the friends of order can rely, and Tories can introduce the necessary measures even more easily than their opponents. They will be less resisted by English squires, less liable to be charged with indifference to property, less likely to arouse that fierce though half latent dislike of Catholicism which lies at the bottom of half the English inability to cope with the grievances of Ireland. Till Parliament meets the sole duty is to prevent at any hazard the uprising threatened for Christmas, but after it has met, the first necessity is to clear English consciences of the last vestige of unfair Irish legislation. Religious equality, an impartial magistracy, and a tenure in accordance with local opinion, are the three concessions, after which we may, if that misery is reserved for this generation, fight Ireland with free hearts.