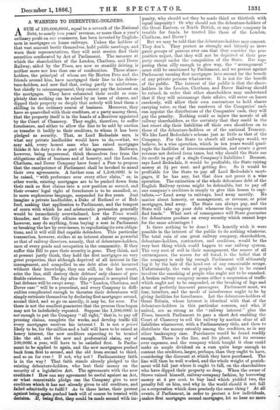 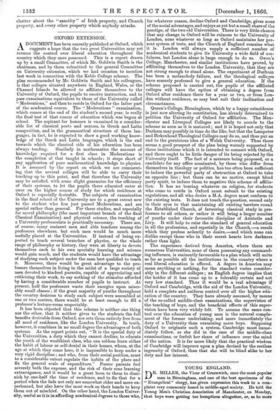 ASUM of 120,000,0001., equal to a seventh of the National Debt, to nearly two years' revenue, or more than a year's ordinary profit on our commerce, has been invested by English- men in mortgages on home railways. Unless the holders of that vast amount bestir themselves, hold public meetings, and

warn their representatives, they will next session find their securities confiscated by Act of Parliament. The measure at which the shareholders of the London, Chatham, and Dover

Railway, aided by the Times, are now so steadily driving, is neither more nor less than one of confiscation. Those share- holders, the principal of whom are Sir Morton Peto and the friends around him, have mortgaged their line to the deben- ture-holders, and now find that, owing partly to misfortune, but chiefly to mismanagement, they cannot pay the interest on the mortgages. They have exhausted their credit so com- pletely that nothing can be raised by an issue of shares, and dipped their property so deeply that nobody will lend them a shilling in the ordinary course of business. Moreover, they have so quarrelled with their creditors, or a party among them, that the property itself is in the hands of a Receiver appointed by the Court of Chancery. They ought, therefore, to suffer foreclosure, and either to allow the line to be sold by auction or transfer it bodily to their creditors, to whom it has been pledged as security. That, as Lord Redesdale says, is what any private landholder would have to do,—what, we may add, every honest man who has raised mortgages thinks it his duty to do as part of his agreement. Railways, however, being impersonal, think themselves free from the obligations alike of business and of honesty, and the London, Chatham, and Dover Company have found a Peer to propose that the omnipotence of Parliament shall be invoked to annul their own agreements. A further sum of 1,500,000/. is to be raised, "with preference over every other claim," or, in other words, existing mortgages are to be pushed down from their rank as first claims into a new position as second, and their owners' legal right of foreclosure is to be annulled, or, in more euphonious language, suspended for five years. Just imagine a private landholder, a Duke of Rutland or of Bed- ford, making that application to Parliament, and the tempest of scorn with which he and aristocratic pretension generally would be inimediately overwhelmed, how the Times would thunder, and the City editors sneer 1 A railway company, however, may do anything, from buying a seat in Parliament or breaking the law by over-issues, to repudiating its own obliga- tions, and it will still find capable defenders. This particular transaction, however, strikes at an interest almost as powerful as that of railway directors, namely, that of debenture-holders, men of every grade and occupation in the community. If they suffer this Bill to pass their security is gone. They think, and at present justly think, they hold the first mortgages on very great properties, that although deprived of all interest in the management, and compelled to see debt after debt incurred without their knowledge, they can still, in the last resort, seize the line, still destroy their debtors' only chance of pro- fitable existence. The day after this proposal is accepted that last defence will be swept away. The "London, Chatham, and Dover case" will be a precedent, and every Company in diffi- culties complicated enough to threaten their debentures will simply extricate themselves by declaring first mortgages second, second third, and so go on merrily, it may be, for ever. For there is not the smallest guarantee that the process thus begun may not be indefinitely repeated. Suppose the 1,500,000/. is not enough to put the Company "all right," that is, to pay off pressing claims, complete the works, and develop traffic till every mortgagee receives his interest ? It is not a priori likely to be, for the million and a half will have to be raised at heavy interest, the new creditors expecting to be treated like the old, and the new and preferential claim, say of 100,000/. a year, will have to be satisfied first. Is Parlia- ment to be applied to again, and the new mortgagees pushed back from first to second, and the old from second to third, and so on for ever ? If not, why not ? Parliamentary faith is in the way? That faith stands already pledged to the existing debenture-holders, who lent their money on the security of a legislative Act. The agreements with the new ersditoes I How can any agreement be useful against an Act, or what conceivable pledge can the Company give to new creditors which it has not already given to old creditors, and failed admittedly to fulfil ? As to these latter, their protest against being again pushed beak will of course be treated with

derision. being first, they could be made second with im- punity, why should not they be made third or thirtieth with equal impunity ? Or why should not the debenture-holders of the Great Eastern, or North British, or any other company in trouble for funds, be treated like those of the London, Chatham, and Dover?

But we may be told that the debenture-holders may consent. They don't. They protest as strongly and bitterly as inor- ganic groups of persons ever can that they consider the pro- position unjust, that they will not be deprived of their pro- perty except under the compulsion of the State. But sup- posing them silly enough to give way, the " arrangement " must still be sanctioned by Parliament, and we protest against Parliament turning first mortgages into second for the benefit of any private persons whatsoever. It is not for the benefit of the public. The interest of the public is that the share- holders in the London, Chatham, and Dover Railway should be ruined, in order that other shareholders may understand that if they will mismanage their affairs, will enter on leases carelessly, will allow their own contractors to hold shares carrying votes, so that the receivers of the Companies' cash can appoint the distributors of the Companies' cash, they will pay the penalty. Nothing could so injure the morale of all railway shareholders, as the certainty that they could in the last resort slip their liabilities off their own shoulders on to those of the debenture-holders or of the national Treasury. We like Lord Redesdale's scheme just as little as that of the Company. For the State to absorb all railways would, we believe, be a wise operation, which in ten years would quad- ruple the facilities of intercommunication, and create a great revenue not derived from taxes, but why should the State use its credit to pay off a single Company's liabilities ? Because, says Lord Redesdale, it would be profitable, the State raising money at 3it per cent. and getting five. So it would be profitable for the State to pay off Lord Redesdale's mort- gages, if he has any, but that does not prove it a wise operation. The extinction of the whole debenture debt of the English Railway system might be defensible, but to pay off one company's creditors is simply to give this lesson to capi- talists,—" Lend away to railways, lend away merrily. No matter about honesty, or management, or revenue, or prior mortgages, lend away. The State can always pay, and the State will take up your debt whenever the company cannot find funds." What sort of consequence will State guarantee for debentures produce on every security which cannot hope for the same advantages ?

Is there nothing to be done ? We heartily wish it were possible in the interest of the public to do nothing whatever. The total ruin of one great railway company, shareholders, debenture-holders, contractors, and creditors, would be the very best thing which could happen to our railway system. The very root of evil in their management, the source of all extravagance, the screen for all fraud, is the belief that if the company is only big enough Parliament will ultimately lug it by the hair of the head out of any conceivable scrape. Unfortunately, the ruin of people who ought to be ruined involves the smashing of people who ought not to be smashed. A broken railway company means either a suspension of traffic which ought not to be suspended, or the breaking of legs and arms of perfectly innocent passengers. Parliament must, we fear, interfere, and the mode of interference ought to be by

united, are as strong as the "railway interest" plus the Times, beseech Parliament to pass a short Act enabling the

Court of Chancery to sell the railway by auction clear of all liabilities whatsoever, with a Parliamentary title, and then to distribute the money rateably among the creditors, as in any other bankruptcy case. Purchasers would be found readily enough. There is the line, and its plant, and its revenue over expenses, and the company which bought it clear could make an ample dividend on a sum quite large enough to content the creditors, larger, perhaps, than they ought to have, considering the discount at which they have purchased. The line will then be well worked, and the whole weight of punish- ment will fall just where it ought to fall, on the shareholders who have dipped their property so deep. When the owner of Stowe ruined himself, railway-company fashion, by borrowing money at 4 per cent. to buy land which yielded two, the penalty fell on him, and why in the world should it not fall

on a corporation which does precisely the same thing? At all events, if Parliament, in order to protect a few individuals, makes first mortgages second mortgages, let us hear no more