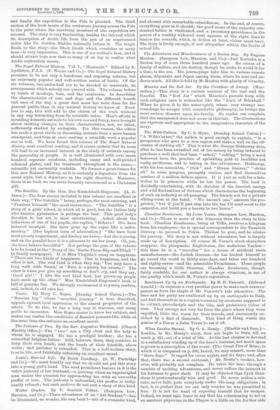 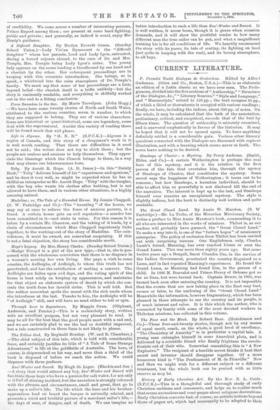 London, in Mr. Henty's story, does not begin to burn till we reach p. 361, out of a total of 388. As the last chapter is devoted to a satisfactory winding up of the hero's fortunes, not much space is given to a description of the event. (The Great Fire of Rome, to which it is compared on p. 368, lasted, we may remark, more than "three days." It raged for seven nights and six days; and, after that, there was a second outbreak.) Mr. Henty's readers, how- ever, will probably not complain. He takes his hero through a number of exciting adventures, and never suffers the interest in his fortunes to grow slack. It may be objected that Cyril Shen- stone is preternaturally wise and good. He never makes a mis- take, never fails, puts everybody under life-long obligations ; in fact, is so perfect that we can only wonder he was permitted to live. It is not for want of exposing himself that he escapes. Indeed, we must take leave to say that his volunteering to act as an amateur physician in the Plague is a little on the further side

of credibility. We come across a number of interesting persons, Prince Rupert among them ; are present at some hard fighting, public and private ; and generally, as indeed is usual, enjoy Mr* Henty's guidance.