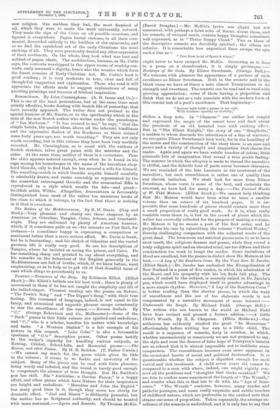 This is one of the least pretentious, but at the same time most quietly effective, books dealing with Scotch life of yesterday, that have recently appeared. The writer does not pretend to the special humour of Mr. Barrie, or to the spirituality which is the note of the new Scotch author who writes under the pseudonym of " Ian Maclaren." " It has seemed to me," he says, " that the simple habits, the quaint ideas, above all the inherent kindliness and the expressive dialect of the Borderers as these existed some forty years ago, are worth recording." They are not only worth recording, but in this volume they have been very worthily recorded. Mr. Cunningham, as is usual with the authors of Scotch sketches, takes great pains with the minister and the elder. At the same time, neither of thorn is a caricature. Thus the elder appears natural enough, even when he is found in his

cups wooing his housekeeper in the name of the herculean shep- herd Geordie, only to find that he has secured a wife for himself.

The wrestling-match in which Geordie acquits himself manfully is admirably drawn, and rustic courtship as represented by the the somewhat extravagant Geordie and the economical Effie is reproduced in a style which recalls the late—and great— Scottish artist, Wilkie. Altogether, Broomieburn is favourably distinguished from most of the rather too numerous books of the class to which it belongs, by the fact that there is nothing in it that is overdone.