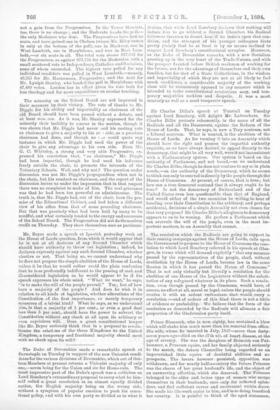 Sir Charles Dfike's speech at Tnnstall on Tuesday against Lord

Rosebery, will delight Mr. Labouchere. Sir Charles Dilke protests vehemently, in the name of all the Radicals and all the Democrats, against the Reform of the House of Lords. That, he says, is now a Tory nostrum, not• a Liberal nostrum. What is wanted, is the abolition of the House of Lords. As for turning it into an Assembly which should have the right and possess the impartial authority requisite, as we have always desired, to appeal directly to the• democracy, that might be all very well, were it not inconsistent, with a Parliamentary system. Our system is based on the authority of Parliament, and not based,—so we understand Sir Charles Dilke, though he does not venture to say so in plain words,—on the authority of the Democracy, which he seems. to think can only be exerted indirectly by the people through the House of Commons. At present, of course, that is true ; but- how can a true democrat contend that it always ought to be true Is not the democracy of Switzerland and of the, United States even less questionable than that of England,1 and would either of the two countries be willing to hear or handing over their Constitution to the arbitrary, and perhaps accidental, decisions of a single Assembly not even chosen for that very purpose P Sir Charles Dilke's allegiance to democracy appears to us to be waning. He prefers a Parliament which' can overrule the will of the people, even in the most im- portant matters, to an Assembly that cannot.