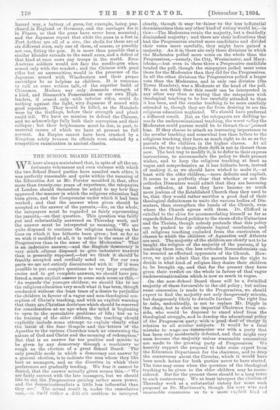 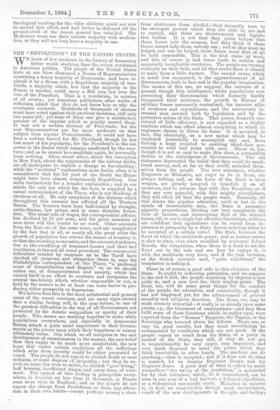 THE SCHOOL BOARD ELECTIONS.

On the new School, Board there will be a dwindled majority of those favourable to the old policy ; but unless some concession is made to the Progressives, we should expect to find the majority not only dangerously minute, but dangerously likely to dwindle further. The right line to take, undoubtedly, is not to replace Mr. Diggle in the chair, but to elect an impartial Chairman from out- side, who would be disposed to stand aloof from the theological struggle, and to develop the educational policy of the Progressive party with a good deal. of energy ih relation to all secular subjects. It would be a fatal mistake to wageea.rt'intemseeine war with a party that has been only accidentally defeated, and that might very soon become the ,majority unless reasonable concessions are made to the growing party of Progressives. We heartily support the proposal to take some expert from the Education Department for the chairman, and to drop the controversy about the Circular, which it would have been much better for both parties never to have started. The time may come when the question of the theological teaching to be given to the elder children may be recon- sidered. But for the present there should be a long truce to such controversy. We at least interpret the election of Thursday week as a substantial victory for some such proposal as Dr. Martineau's, though his very wise and reasonable concession as to a more ixplicit hind of theological teaching for the elder children could not now be carried into effect, and had better be deferred till the ground-swell of the recent quarrel has subsided. The Moderates must use their minute majority with modera- tion, or they will not long have a majority to use.