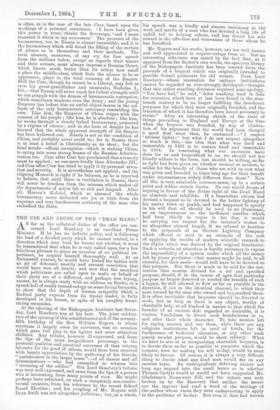 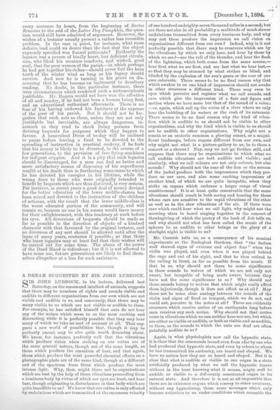 THE USE AND ABUSE OF THE " DEAD HAND."

AS far as the collateral duties of the office are con- cerned, Lord Rosebery is an excellent Prime Minister. If he has no definite policy, and is following the lead of a divided party which he cannot control, in a direction which may tend he knows not whither, it must be remembered that when he is only called upon for a few felicitous phrases to grace an occasion of no political im- portance, he acquits himself thoroughly well. At an Eatanswill contest, he would have kissed the babies with an air of debonair suavity and earnest conviction that would have won all hearts ; and now that the sacrifices which politicians are called upon to make on behalf of their party are of a different, and perhaps less trying, nature, he is always ready with an address on Burke, or a speech full of neatly turned eulogy on some living favourite, to show that the depth of human sympathy which a Radical party expects from its titular leader, is fully developed in his breast, in spite of his naughty horse- racing escapades. At the opening of the Bishopsgate Institute last Satur- day, Lord Rosebery was at his best. The joint celebra- tion of the opening of this establishment and of the seventy- fifth birthday of the Rev. William Rogers, to whose exertions it largely owes its existence, was an occasion which gave full play to his lighter and more attractive abilities. Any tribute, however ill-expressed, and from the lips of the most insignificant personage, to the personal qualities and practical successes of that veteran labourer for the good of others, would have been received with hearty appreciation by the gathering of his friends, " parishioners in the larger sense "—of all classes and all denominations — who had assembled to witness this " crowning of the edifice." But Lord Rosebery's tribute was very well expressed, and came from the lips of a person who is interesting from many points of view. He might perhaps have refrained, on such a completely non-contro- versial occasion, from his reference to the recent School Board Election ; and his coupling of Mr. Rogers with Dean Swift was not altogether judicious ; but, as a whole, his speech was a kindly and sincere testimony to the work and merits of a man who has devoted a long life of uphill toil to helping others, and has found his sole reward in the affection and veneration of those whom he. has benefited.