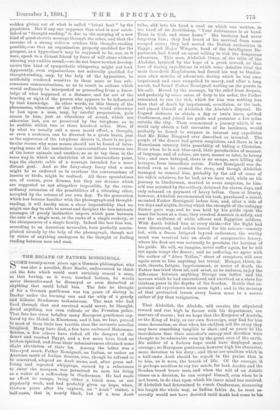 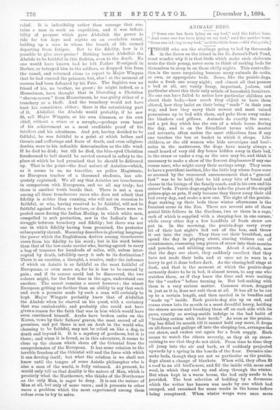 THE ESCAPE OF FATHER ROSSIGNOLI.

and hideous Sondanese task mistress. The man who had lived through that and survived would never, he thought, dread anything, not even ridicule or the Prussian police. That fate has since befallen many European gentlemen cap- iured by the Mandi in Khartoum, and it has, we fear, proved to most of them little less terrible than the sarcastic novelist i'm'agined. Many have died, a few have embraced Mahomme- danism, a few others have risked all the dangers of the desert and reached Egypt, and a few more have lived on broken-spirited, and from their submissiveness obtained some slight alleviation of their loi. Among the latter was a

blue-eyed monk, Father Rossignoli, an , or rather an Austrian monk of Italian descent, who, though he refused to lie converted, adopted an Arab name, and, after great suf- fering and repeated whippings, earned by a reluctance to enter the mosques, was permitted to earn his living as a waiter at a coffee-shop in Omdurman. He had made no effort to escape, being either a timid man, or one physically weak, and had probably given up hope, when, thirteen years after his capture, an " Arab" visitor, a half-caste, that is, nearly black, but of a true Arab reading between man and man. where his first act was naturally to proclaim the heroism of his guide. He will, we imagine, never suffer again, for he will not again tempt the desert ; and no suffering, we agree with the author of " Abou Telfan," short of recapture, will ever again seem to him anything but trivial. Hunger, thirst, in-

SOME twenty-seven years ago a German philosopher, who suit, threats, fatigue, imprisonment, or terror of death, the was also a novelist, Herr Raabe, endeavoured to think Father has tried them all, and must, as he endures, enjoy the out the fate which would most certainly anneal a man, difference between anything Europe can inflict and the so that having, as it were, touched bottom, he would horrors which he had encountered and survived as a slave for never thenceforward be dismayed or even disturbed at thirteen years in the depths of the Soudan. Beside that ex- anything that could befall him. The fate he thought perience all experiences must seem light ; and in the memory of for a German gentleman was ten years of davery in of that protracted lesson every lesson must be a source Darfur under the burning sun and the whip of a greedy rather of joy than resignation.