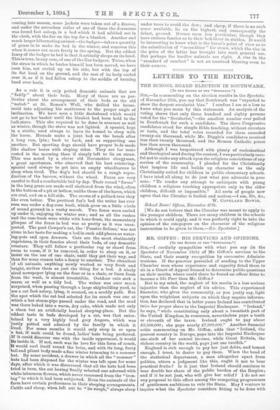 THE SCHOOL BOARD ELECTION IN SOUTHWARK. [To THE EDITOR OF THE " SPECTATOR.")

SIR,—In commenting on the election results in the Spectator of November 24th, you say that Southwark was "expected to show the deepest secularist bias." I confess I am at a loss to know what you mean by this statement. An analysis of the voting shows that only three hundred and eighty persons voted for the "Secularist,"—the smallest number ever polled in Southwark for such a candidate. The three Progressive candidates stood for simple Bible teaching, without circulars or tests, and the total votes recorded for them exceeded twenty-six thousand, while Mr. Diggle's candidates received less than twenty thousand, and the Roman Catholic priest less than seven thousand.

Although I was bespattered with plenty of ecclesiastical and theological mud during the contest, I was particularly care- ful not to make any attack upon the religious convictions of any section of the community. I pleaded for the Christianity that inspires life and builds up character as the only Christianity suited for children in public elementary schools. I have tried all along to do just what you advocate in your note ; " To render any attempt to anticipate with young children a religious teaching appropriate only to the elder children, difficult or impossible." All sorts of people now agree that the Circular is foolish and useless.—I am, Sir, &c., [We do not believe that the Circular was meant to apply to the younger children. There are many children in the schools to which it could apply, and it was perfectly right to take the opinion of the ratepayers on the character of the religious instruction to be given to them.—En. Spectator.]