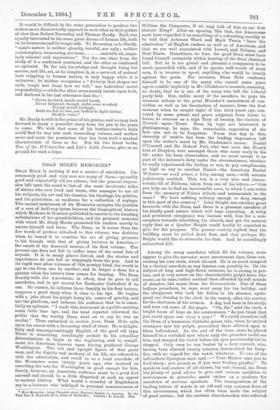 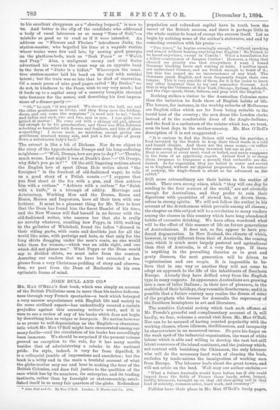 DEAN HOLE'S MEMORIES.* DEAN Holm is nothing if not a

master of anecdotes. Un- commonly good and very new are many of them,—passably good and respectably old are others ; but the general impres- sion left upon the mind is that of the most inveterate teller of stories who ever lived and wrote, who manages to use all his subjects, his art and his classics, his theology, his politics, and his patriotism, as mediums for a collection of sayings. The second instalment of his Memories occupies the position of a sort of half-way house between the biographical history which Madame do Gontaut published in answer to the kneeling solicitations of her grandchildren, and the personal memoirs with which Mr. Stacy Marks presented his readers merely to amuse himself and them. The Dean, as it seems from the few words of preface attached to this volume, was desirous when he issued it to combine the art of giving pleasure to his friends with that of giving lectures in America,— the result of the deserved success of his first volume. The present one does not fail to suffer some of the usual fate of sequels. It is in many places forced, and the stories and experiences do not fall so trippingly from the pen. And in its rapid race after volumes of this gossipy kind, the world is apt to run from one to another, and to forget a dean for a painter when the latter's turn comes for hearing. The Dean frankly tells the Americans, in effect, that he goes to tell anecdotes, and to get money for Rochester Cathedral if he can. He cannot, he informs them frankly in his first lecture, suppress a good story when it rises to his lips. He begins with a joke about his pulpit being his centre of gravity, and not the platform, and informs his audience that he is essen- tially an optimist. I made this statement at a public meeting some little time ago, and the local reporter informed the publics that the worthy Dean went on to say he was an oculist." Thus embarked in medios jocos, Dean Hole sails upon his course with a favouring wind of story. He is delight- fully and uncompromisingly English of the good old type. There is something touchingly archaic in his schoolboy determination to begin at the beginning, and to compli- ment his American hearers upon having produced George Washington. The tall and upright figure of that great man, and the dignity and modesty of his life, are referred to with due admiration, and recall to us a local anecdote of the Westerner some twenty years ago, who insisted on recording his vote for Washington as good enough for him. Surely, however, an American audience must be a good deal amused and should be a little disgusted at such an appeal to ancient history. What would a roomful of Englishmen say to a lecturer who indulged in personal reminiscences of More Memories : being Thoughts about England Spoken in America. By the 'try Rev. B. Reynolds ER lc, Doan of Rochester. London: IL Arnold. 1894, William the Conqueror, if we may, talk of him as our first historic King P After an opening like that, the Americana must have regarded it as something of a refreshing novelty to be told that Artemus Ward and Mark Twain " have the admiration" of English readers as well as of American, and that we are well acquainted with Lowell, and Holmes, and Bret Harte. Sometimes, we fear, the good Dean must have found himself ominously within hearing of the fatal chestnut bell. But he is too genial and pleasant a companion to be much quarrelled with, and if he speaks soft words of most men, it is because to speak anything else would be clearly against the grain. For instance, Dean Hole confesses himself to be one of the many who ceased some years ago to confide implicitly in Mr. Gladstone's counsels, meaning, no doubt, that he is one of the many who left the Liberal party fold. But, unlike many of the seceders, he pays his warmest tribute to the great Minister's earnestness of con- viction as well as his fascination of manner, from the first moment when he caught sight of him sixty years ago, con- veyed by some potent and grave seigniors from house to house, to canvass as a high Tory of twenty, the electors of Newark - upon - Trent. Even by boys not interested in physiognomy, he says, the remarkable expression of the fade was not to be forgotten. From that day to this, sincerity of motive has been the leading impression left upon the writer's mind by Mr. Gladstone's career. Daniel O'Connell and Sir Robert Peel, who was once the Dean'S host at Drayton, were amongst those who came early in his life under his keen observation, and we must accept it as part of the lecturer's duty under the circumstances, whether he really experienced the feeling or not, to pay compliments as high as any to another Daniel—the American Daniel Webster—as ante ayBpoy, a king among men,—with accents judiciously omitted. This, too, is a very nice and charac- teristic bit of Dickens, taken from one of his letters :—" Can you help me to find an inaccessible cave, to which I can retire from the memory of Prince Albert, and testimonials to the same P We have nothing solitary enough or deep enough in this part of the country." Jobn Bright was another great favourite with the Dean, and there is a pleasant anecdote of his kindly good nature which will bear repeating. A witty and persistent clergyman was instant with him for a sub- soription towards rebuilding his church, and got the natural reply that as a Quaker Bright could hardly be expected to give for the purpose. The parson acutely replied that the building must be pulled down first, and that perhaps Mr. Bright would like to subscribe for that. And he accordingly subscribed £10.

Among the many anecdotes which fill his volume, none appear to give the narrator more amusement than those con- cerning his own cloth, which abound. He is as much tempted by a clerical anecdote as any layman can possibly be. On the subject of long and high-flown sermons, he is strong in pro- test, and is very severe on the characteristic pulpit-bore, who seems, as he says, rather soothed than offended by soft sounds of slumber, like music from the Sonnanibuia. One of these tedious preachers, he says, went away for his holiday, and the clergyman who took his duties in his absence, apolo- gised one Sunday to the clerk in the vestry, after the service, for the shortness of his sermon. A dog had been in his study, and torn out some of the pages. " Oh, Six," said the clerk, a bright beam of hope on his countenance, "do you think that you could spare our vicar a pup P " We could ourselves tell the Dean of a humorous Catholic priest who, when he invited strangers into his pulpit, prescribed their allotted span to them beforehand. As the end of the term came he placed himself in a secluded spot where only the preacher could see him, and dangled his watch before his eyes persistently till ho stopped. Only once he was beaten by a fiery convert, who, having been allowed twenty minutes, denunciated for forty- five, with no regard for the watch whatever. To one of the tall-talkers Spurgeon once said :—" Your Master sent you to feed sheep ; you preach as if you were feeding giraffes." To speakers and orators of all classes, lay and clerical, the Dean has plenty of good advice to give, and various antidotes to nervousness to prescribe, again rather as a medium for anecdotes of nervous speakers. The transposition of the leading letters of words is an old and very common form of this nervousness, which has often been made the subject of good stories ; but the anxious churchwarden who referred to his excellent clergyman as a "shoving leopard," is new to ds. And better is the slip of the candidate who addressed a body of rural labourers as so many " Tons of Soil,"—a

mistake so good as to read as if it were intended. An address on " Flowers and Florists " introduces Jinks, the station-master, who beguiled his time at a wayside station *here trains were few and late, by sowing good precepts on the platform-beds, such as " Seek Peace " or " Watch and Pray." Alas, a malignant enemy and rival florist advertised his wares in the same way on an opposite bank in the form of "Jinks is a hidiot." Whereupon the sensi- tive station-master laid his head on the rail with suicidal intent ; but the train was so late that he died of starvation.

Of a comic poem of nine good pages called "My Butler," we do not, in kindness to the Dean, wish to say very much ; but it leads up to a capital story of a country bumpkin elevated

into footman for the nonce, and describing his first impres- sions of a dinner-party :-

" Oh," he said, "it was grand. We stoort in the hall, me and the other gentlemen in livery, and they flung open the folding- doors, and out come the nompions " [a word new to us], "lords and ladies and such, two and two, arm in arm. I was quite sur- prised at rnestur ! He conic out with a skimpy old girl, almost old enough to be his grandmother, and there was Miss Johnson a-looking so beautiful with flowers and feathers, and bits of glass a-sparkling ! I never made no mistakes, except giving one gentleman mustard wrong side, and just a few drops of gravy down a unbeknown lady's back."

The extract is like a bit of Dickens. Nor do we object to the story of the hypochondriac Dumps and his long.suitering neighbour:—"' Well, Dumps, how are you to-day ? Thanks, much worse. Last night I was at Death's door.'—' Oh Dumps, why didn't you go in ? ' " Of the still lingering notions about the English love of sport (Dean Hole writes about "the

foreigner" in the frankest of old-fashioned ways), he tells us a good story of a Polish cousin :—" I suppose that

you first shoot at the fox with a gun, and then achieve him with a cutlass." "Achieve with a cutlass" for "finish with a knife," is a triumph of oddity. Marriage and Aristocracy, Working Men and the Drama, Roses and Boxes, Horses and Impostors, have all their turn with our

lecturer, It must be a pleasant thing for Mr. Tree to hear that the Dean has found him the finest Hamlet of his time, and the New Woman will find herself in no favour with the old-fashioned writer, who assures her that she is really no novelty whatever, recalling how Pepys, in 1666, walking in the galleries of Whitehall, found the ladies " dressed in

their riding garbs, with coats and doublets just for all the world like mine, with periwigs and hats, so that only for the long skirts dragging under the men's coats, no one would take them for women,—which was an odde sight, and one which did not please me." What Pepys or the Dean would say to divided skirts, we must infer from the context. Assuring our readers that we have but extracted a few plums from a very Christmas-pudding of story and observa- tion, we part from the Dean of Rochester in his own optimistic frame of mind.