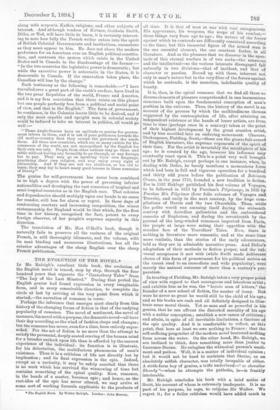 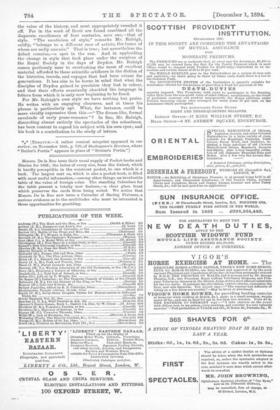 THE EVOLUTION OF THE NOVEL.* Ix Mr. Raleigh's excellent little

book, the evolution of the English novel is traced, step by step, through the four hundred years that separate the "Canterbury Tales" from "The Lay of the Last Minstrel." During that period the English genius had found expression in every imaginable form, and in every conceivable direction, to complete the circle at last by arriving at the very point from which it started,—the narration of romance in verse.

Perhaps the inference that emerges most clearly from this history of the changing forms of fiction is that of the undying popularity of romance. The novel of sentiment, the novel of manners, the novel-with-a-purpose, the dramatic novel—all have their day according as the wind of fashion chops and changes; but the romance has never, even for a time, been entirely super. ceded. For the art of fiction is no more than the attempt to satisfy the perennial, deeply-seated craving of the human mind for a broader outlook upon life than is afforded by the narrow experience of the individual : its function is to illustrate, for his delectation, the multifarious phenomena of man's existence. Thus it is a criticism of life not directly but by implication ; and its final expression is the epic. Indeed, except as a curiosity, it may be safely asserted that there is no work which has survived the winnowing of time but contains something of the epical quality. Now, romance, in the hands of a master, becomes epic ; and hence, as the root-idea of the epic has never altered, we may arrive at some sort of working formula applicable to the products of

It is, then, in the epical romance that we find all these se diverse elements of pleasure comprehended in one harmonious structure built upon the fundamental conception of man's• position in the universe. Thus, the history of the novel is an account of the process by which the multitudinous themes, suggested by the contemplation of life, after attaining an independent existence at the hands of lesser artists, are from time to time (perhaps once in a century) taken at the point, of their highest development by the great creative artist, and by him moulded into an enduring monument. Chaucer, Shakespeare, Fielding, Scott,—these are the giants full-armed

of English literature, the supreme exponents of the spirit of

their time. For the artist is invariably the mouthpiece of his. age : he is created by the age, however his influence may eventually react upon it. This is a point very well brought out by Mr. Raleigh, except perhaps in one instance, when, in dealing with Defoe, he barely mentions a momentous force

which had been in full and vigorous operation for a hundred and thirty odd years before the publication of Robinson Crusoe, in the year 1719, founded a new tradition in fiction. For in 1582 Hakluyt published his first volume of Voyages, to be followed in 1613 by Purchas's Pilgrimage, in 1625 by Purchas His P ilgrimes (four folio volumes of Voyages and Travels), and early in the next century, by the huge com- pilations of Harris and the two Churchills. Thus, while the polite world was amusing itself during the sixteenth century with Arcadian gallantries and the embroidered conceits of Euphuism, and during the seventeenth by the perusal of the long-winded romances imported from Paris, the people at large were sating their appetites with the sturdier fare of the Travellers' Tales. Now, there is• nothing in literature more romantic, and at the same time more realistic, than the stories of the early adventurers, told as they are in admirable narrative prose. And Defoe's, adaptation of their methods to fiction proper, and the unit- versal acceptance it met with (while Swift made deliberate choice of this form of presentment for his political satires as, the surest road to an immediate and wide popularity), were merely the natural outcome of more than a century's pre- paration.

In treating of Fielding, Mr. Raleigh takes a very proper point of view with regard to that courageous and laborious artist ; and exhibits him as he was, the " heroic man of letters," the founder of a new school of fiction, the master of irony. But were he never so great he would still be the child of his age; and so his books are each and all definitely designed to illus- trate some moral thesis. Yet so sane and so powerful is his, genius, that he can affront the distorted morality of his age with a nobler conception ; establish a new canon of criticism; and attain, in spite of all inevitable limitations, a tincture of the epic quality. And it is comfortable to reflect, at thin point, that here at least we owe nothing to France : that the self-sufficing progenitor of the modern novel borrowed nothing from across the water. On the other hand, Mr. Raleigh, we are inclined to think, does something more than justice to Laurence Sterne. He eulogises the whimsical parson's senti. went and pathos. Well, it is a matter of individual opinion ; but it would not be hard to maintain that Sterne, as an absolutely selfish character, was totally incapable of either. A sixth-form boy of genius, a trifle underbred—" cc chevalier Shandy "—when he attempts the pathetic, is—is frankly intolerable.

Mr. Raleigh concludes his book with a brief notice of Scott, his account of whom is extremely inadequate. It is no

part of his purpose, he says, to oritticise Sir Walter. We regret it ; for a fuller criticism would have added much to all time. It is that of man at war with vast antagonisms. His appearance, his weapons, the scope of his combat,— these things vary from age to age ; the nature of the foreeir against which he contends are differently conceived according to the time; but this immortal figure of the armed man is the one essential element, the one constant factor, in all literature. And as the pleasure that we discover in the spec- tecle of this eternal warfare is of two sorts—the sensuous and the intellectual—so the various interests disengaged fan naturally in two divisions—that of incident, and that of character or passion. Bound up with these, inherent not only in man's nature but in the very fibre of the forces against which he contends, is the nameless, indefinable quality of beauty.

the value of the history, and most appropriately rounded it off. For in the work of Scott are found combined all the disparate excellences of four centuries, save one,—that of style. "The asceticism of style," remarks Mr. Raleigh, coldly, "belongs to a different race of artists, the lesser of whom are sadly anxmic." That is true ; but nevertheless the defect remains,—a spot in the sun. And in applauding the change in style that took place under the auspices of the Royal Society in the days of Dryden. Mr. Raleigh comes perilously near to overlooking the mass of excellent material afforded to these scientific artificers in the diction of the histories, travels, and voyages that had been extant for generations. It has also to be borne in mind that what the disciples of Dryden gained in precision they lost in colour, and that their efforts eventually shackled the language in fetters from which it is only now beginning to be freed.

For Mr. Raleigh's own style we have nothing but praise. He writes with an engaging clearness, and at times his phrase is particularly apt. What, for instance, could be more vividly expressive than this :—" The dream-like, formal cavalcade of early prose-romance " P In fine, Mr. Raleigh, discarding almost entirely the spectacles of the schoolman, has been content to regard his subject with his own eyes ; and his book is a contribution to the study of letters.