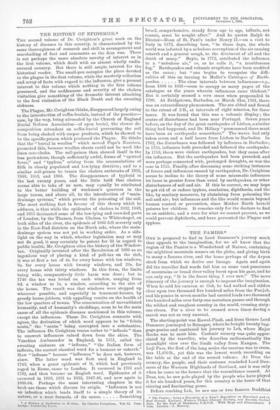 THE HISTORY OF EPIDEMICS.* TEE second volume of Dr. Creighton's

great work on the history of diseases in this country, is characterised by the same thoroughness of research and skill in arrangement and marshalling of fact and comments as the first was. There is not perhaps the same absolute novelty of interest as in the first volume, which dealt with an almost wholly undis- covered country. But there is still ample interest for the historical reader. The small-pox occupies the place devoted to the plague in the first volume, while the masterly collection and array of facts with regard to the influenza, give a present interest to this volume which nothing in the first volume possessed, and the suddenness and severity of the cholera visitation give something of the dramatic interest attaching to the first visitation of the Black Death and the sweating sickness.

The Plague, Mr. Creighton thinks, disappeared largely owing to the introduction of coffin-burials, instead of the practice— now, by the way, being advocated by the Church of England Burial Reform Association—of open burial, the slower de- composition attendant on coffin-burial preventing the soil from being choked with corpse products, which he showed to be the specific poison which produced the Plague. He thinks that the "burial in woollen" which moved Pope's Nareissa, promoted this, because woollen sheets could not be used like linen sere-cloths. The soil-poison then showed itself in the less portentous, though sufficiently awful, forms of "spotted fever," and "typhus," arising from the accumulations of filth in closely populated and low-lying districts ; and to a similar soil-poison he traces the cholera outbreaks of 1832, 1848, 1853, and 1866. The disappearance of typhoid in the last twenty years, and the little hold that cholera seems able to take of us now, may equally be attributed to the better building of workmen's quarters in the large towns, and above all, to the introduction of "main- drainage systems," which prevent the poisoning of the soil. The most striking fact in favour of this theory which he adduces, is that while the epidemics of cholera in 1832, 1848, and 1853 decimated some of the low-lying and crowded parts of London, by the Thames, from Chelsea to Whitechapel, on both sides of the river, the epidemic of 1866 fell severely only in the East-End districts on the North side, where the main- drainage system was not yet in working order. As a side- light on the way in which, whether legislation may or may not do good, it may certainly be potent for ill in regard to public health, Mr. Creighton cites the history of the Window- tax. Originally invented after the Revolution of 1688 as an ingenious way of placing a kind of poll-tax on the rich, it was at first a tax of 4s. for every house with ten windows, 8s. for every house with twenty windows, and 20s. for every house with thirty windows. In this form, the limits being wide, comparatively little harm was done ; but in 1746 the tax was levied on each window, ranging from 6d. a window to ls. a window, according to the size of the house. The result was that windows were stopped up wherever possible, and especially in tenement-houses, by greedy house.jobbers, with appalling results on the health of the low quarters of towns. The concentration of unventilated humanity, and of humanity's sheddings, seem to be the main cause of all the epidemic diseases mentioned in this volume, except the influences. These Dr. Creighton connects with agues, the derivation of which word appears to bo " febris acute," the " acute " being corrupted into a substantive. The influenza Dr. Creighton traces rather to " influxio " than to unsweet influences rained down from the skies. The Venetian Ambassador in England, in 1551, called the sweating sickness an " influsao," "the Italian form of influxio, the correct classical word for a humour or catarrh." How " influsso " became "influenza" he does not, however, show. The latter word was first used in England in 1743, when a great epidemic of it, which had previously raged in Rome, came to London, It recurred in 1761 and 1782, and then became an English word. Epidemics of it occurred in 1803, 1831 to 1833, 1847.48, and now again in 1889.94. Perhaps the most interesting chapters in the book are those which discuss its origin. "Influenza is not an infection which lends itself to a simple theory of its nature, or a neat formula of its cause Something Hinton; of Reidemioa In Dothan. By Charles Creighton. Vol. II. OUR.. britilp I 'University Cress. broad, comprehensive, steady from age to age, telluric, not cosmic, must be sought after." And he quotes Ralph de Dicetoi—Dean of St. Paul's under Henry 1I.—on a visit to Italy in 1173, describing how, "in those days, the whole world was infected by a nebulous corruption of the air causing catarrh and a general cough, to the detriment of all and the death of many." Boyle, in 1772, attributed the influenza to a " nebulous air," or, as he calls it, " a troublesome fog." Earthquakes and volcanic eruptions have been credited as the cause ; but " one begins to recognise the diffi- culties of this on turning to Mollet's Catalogue of Earth- quakes The clear intervals between infiaenzas—e.g., from 1803 to 1831—seem to occupy as many pages of the catalogue as the years wherein inflnenzas came thickest." But it certainly seemed a vera cause when propounded in 1799. At Bridgetown, Barbados, on March 31st, 1761, there was an extraordinary phenomenon. The sea ebbed and flowed to the extent of 2 ft., at intervals of eight minutes, for three hours. It was found that this was a volcanic display ; the centre of disturbance had been near Portugal. Seven years before, on the day of the great earthquake of Lisbon, a similar thing had happened, and Dr. Hillary "pronounced there must have been an earthquake somewhere." The waves had only taken seven and a half hours from Lisbon to Barbados. In 1762, the disturbance was followed by influenza in Barbados ; in 1755, influenza both preceded and followed the earthquake. In 1783, there were violent earthquakes, but they came after the influenza. But the earthquakes had been preceded, and were perhaps connected with, prolonged droughts, as was the case in 1755. Finally, after discussing some striking instances of fevers and influences caused by earthquakes, Dr. Creighton seems to incline to the theory of some miasmatic influences let loose in greater force than usual by earthquakes, or other disturbances of soil and air. If this be correct, we may hope to get rid of or reduce typhus, scarlatina, diphtheria, and the like, by sanitary measures, by abstaining from poisoning the soil and air; but influences and the like would remain beyond human control or prevention, since Mother Earth herself poisons her children. It remains only for the doctors to find us an antidote, and a cure for what we cannot prevent, as we could prevent diphtheria, and have prevented the Plague and typhus.