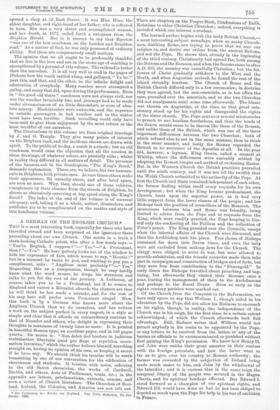 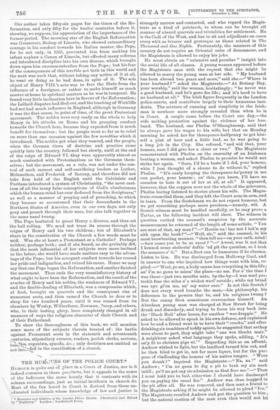 A GERMAN ON THE ENGLISH CHURCH,* Tills is a most

interesting book, especially for those who have travelled abroad and been surprised at the ignorance there prevailing about our own Church. One meets in a train a stern-looking Catholic priest, who after a few words says :— " You're English, I suppose ?"—" Yes."—" A Protestant, then P "—Yes." He here politely looks out of the window to hide his expression of face, which seems to say, "Heretic !" but in a moment he turns to you, and wishing to pay you a compliment, asks : " Anglican most probably P "—" Yes." Regarding this as a compromise, though he may hardly know what the word means, he drops his sternness and talks to you for the rest of the journey. A Lutheran, of course, takes you to be a Protestant, but if he comes to England and enters a Ritualist church, the chances are that he will think he has made a mistake, and for the rest of his stay here will prefer some Protestant chapel. Now, this book is by a German who knows more about the Anglican Church than we do ourselves, and has written a work on the subject perfect in every respect, in a style so simple and clear that it affords an extraordinary contrast to that of Neander and others, who delight in expressing their thoughts in sentences of twenty lines or more. It is printed in beautiful Roman type, on excellent paper, and in 560 pages quarto. Its motto is : "Non debet dioi tendere in judicium ecolesiasticte libertatis quod pro Rege et republioa neces- sarium invenitur," which the author follows himself, marching straight on, having no opinion of his own, or keeping it secret if he have any. We should think his treatise will be worth translating by one of our universities for the edification of churchmen and students. It bristles with notes, referring to the old Saxon chronicles, the works of Oardwell, Stubbs, and others, Acts of Parliament, trials, &c. ; in the appendix are letters, proclamations, extracts, canons, and even a review of Church literature. The Churches of Scot- land, Ireland, the Colonies, and America are not left out.

There are chapters on the Prayer-Book, Confessions of Faith, Relations to other Christian Churches ; indeed, everything is included which can interest a student.

The learned author begins with the early British Church,— a most interesting subject nowadays, when so many Church- men, disliking Rome, are trying to prove that we owe our religion to, and derive our orders from, the ancient Britons, and not the Pope. He shows that, already in the beginning of the third century, Christianity had spread far, both among the Britons and the Romans, and when the Saxons came in after A.D. 450, the country was essentially Christian ; but the fol- lowers of Christ gradually withdrew to the West and the North, and when Augustine arrived, he found the rest of the island virtually heathen. The Church of Rome and the British Church differed only in a few ceremonies; in doctrine they were agreed, but the non-essentials, as is too often the case, prevailed over the essentials, and so the two Churches did not amalgamate until some time afterwards. The blame was thrown on Augustine, at the time, as that great mis- sionary stood up for his rights and disregarded the rights of the sister church. The Pope sent over several missionaries to preach to our heathen forefathers, and thus the heads of the Saxon monks came to be shaven like those of the Roman, and unlike those of the British, which was one of the three important differences between the two Churches ; both of which refused also to eat in the same manner, then to think in the same manner, and lastly the Roman regarded the British as no sucoessor of the Apostles at all. In the year 664, however, a layman, King Oswin, called a council at Whitby, where the differences were amicably settled by adopting the Roman tongue and method of reckoning Easter. But in the Western Church the British practices prevailed. until the ninth century, and it was not till the twelfth that the Welsh Church submitted to the authority of the Pope. At first the Church and State remained independent of each other, the former finding within itself every requisite for its own development ; but when the King became predominant, the Church leant upon the superior power, as it had very little support from the lower classes of the people; and her Bishops took the position of councillors of the Monarch. The intercourse between him and Rome was friendly, being limited to advice from the Pope and to requests from the King, which were readily granted, the Pope keeping to him- self only the conferring of the Pallium and the collection of Peter's pence. The King presided over the Councils, except when the internal affairs of the Church were discussed, and then the Archbishop took his place. Free choice of Bishops remained far down into Saxon times, and even the laity were not excluded from making laws for the Church. The clergy were obliged to serve in war, but were allowed to provide substitutes, and the trinoda necesaitas made them take part in campaigns and construction of bridges and of forts, but they were free from contributing to the " Danengeld." In early times the Bishops travelled about preaching and bap- tising, but afterwards they visited their dioceses once a year, leaving the management of them to the Archdeacons and perhaps to the Rural Deans. Even as early as the eighth century parishes were marked out.

Of the Church from the Conquest to the Reformation, we have only space to say that William I., though aided in his adventure by the Pope, did not allow his Holiness to encroach on his rights, though, in reality, the independence of the Church was in his reign, for the first time, to a certain extent acknowledged ; of which the Church afterwards took full advantage. Still, Eadmer writes that William would not permit anybody in his realm to be appointed by the Pope, or any letters to be received from the latter, or any of the barons or officials to be excommunicated or punished without first gaining the King's permission. We know how Henry II. and John were unlike their great ancestor in their contest with the foreign potentate, and how the latter went so far as to give over his country to Roman authority; the former was rewarded by the subjection of Ireland being made much easier to him, and John by the withdrawal of the Interdict ; and it is curious that in the same reign the temporal liberty of the people was secured. in the Magna Charta, and its spiritual bondage effected. Bet Edward I. stood forward as a champion of our spiritual rights, and Edward III. would have done so had he not been obliged to depend so much upon the Pope for help in his wax of ambition in France. Our author takes fifty-six pages for the times of the Re- formation, and only fifty for the twelve centuries before it, showing, we suppose, his appreciation of the importance of the former period. The morning star of the English Reformation was Grossetete, Bishop of Lincoln, who showed extraordinary courage in his conduct towards his Italian master, the Pope, for he not only, in 1235, prevented him from making his infant nephew a Canon of Lincoln, but effected many reforms and introduced discipline into his own diocese, which brought down upon him excommunication from the Pope ; but his fear of the consequences of this terrible act both in this world and the next was such that, without taking any notice of it at all, he went on doing as he had done, in spite of it. The sole object of Henry VIII.'s acts was to free the State from the influence of a foreigner, or rather to make himself as much master at home in spiritual matters as he was in temporal. He found very little inclination here in favour of the Reformation ; the Lollard disputes had died out, and the teaching of Wickliffe had not had much influence in England, although in Germany it was the first cause, in point of time, of the great Protestant movement. The nobles were very ready on the whole to help Henry in his attacks on Rome and his grasping conduct towards the Church here, because they expected from it much benefit for themselves ; but the people went so far as to rebel on more than one occasion against the few novelties which it introduced. The nobles got what they wanted, and the people, when the German views of doctrine and practice came quickly into the country, followed but slowly, until at the end of the reign of Edward VI. they were apparently almost as much contented with Protestantism as the Germans them- selves ; but the movement, as a rule, was not under the con- trol of such earnest and self-sacrificing leaders as Luther, Melanothon, and Frederick of Saxony, and therefore did not take firm hold of the English until the Calvinists and Puritans introduced a system of Christianity, "the most cast- iron of all the many false conceptions of God's absoluteness which the human mind has ever deduced from the Scriptures," as well as a manner of praying and of preaching, to which they became so accustomed that their descendants in the Northern States of America, even in our own days, not only pray and preach through their nose, but also talk together in the same nasal twang.

The Pope hesitated to grant Henry a divorce, and thus set the ball rolling. We need not trace its course through the reigns of Henry and his two children ; but of Elizabeth's share in the constitution of the Church a few words must be said. Was she at heart a Protestant or a Catholic P Perhaps neither, perhaps both ; and if she found, as she probably did, that the most influential of her subjects were more inclined to the latter, she would have made matters easy to the advan- tage of the Pope; but his arrogant conduct towards her roused her pride and indignation, and ruined his cause, Hence we may say that one Pope began the Reformation, and another finished the movement. Thus ends the very unsatisfactory history of what ought to have been the Reformation, and the result of the avarice of Henry and his nobles, the weakness of Edward VI., and the double-dealing of Elizabeth, was a compromise which, at first, brought on quarrels and the consequent rise of numerous sects, and then caused the Church to doze or to sleep for two hundred years, until it was roused from its slumbers by Wesley, Wilberforce, Newman, Pusey, and others, who, to their lasting glory, have completely changed in all manners of ways the religious character of their Church and of their Fatherland.

To show the thoroughness of this book, we will mention some more of the subjects therein treated of : the battle against Protestant sects in the sixteenth and seventeenth centuries, stipendiary curates, readers, parish clerks, sextons, `-ti beau_ke8, organists, synods, Sco. ; only doctrines are omitted as not in": ded in the constitution of a church.