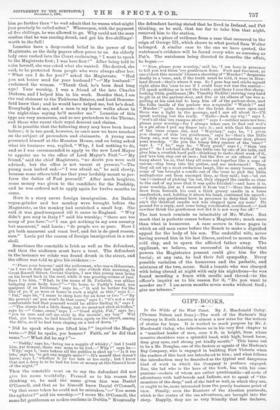 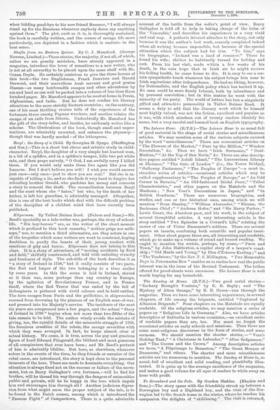 In the Wilds of the West Coast. By X. Macdonald Oxley. (Thomas Nelson and Sons.)—The work of the Hudson's Bay Company in North America is almost a new mine for the writers of stories for boys. It is worked to much purpose by Mr. J. Macdonald Oxley, who introduces us in his very first chapter to a manifest leader of men, over 6 ft. in height, from whose massive shoulders rose a splendid head, with high, broad brow, deep grey eyes, and strong yet kindly mouth." This turns out to be a Mr. Douglas, one of the factors or agents of the Hudson's Bay Company, who is engaged in building Fort Victoria when the readers of this book are introdw,,ed to him ; and what follows the introduction may be described as the typical and dangerous kind of work in which the Company is perforce engaged. Rae, the lad who is the hero of the book, has with his com- panions—certain of whom are rather questionable—all sorts of adventures with half-breeds and Indians, not to speak of "the monsters of the deep," and of the land as well, in which they are, or ought to be, more interested from the purely business point of view. Finally, even the Russians of the Aleutian peninsula, which is the centre of the sea adventures, are brought into the story. Happily, they are so very friendly that Rae declares,

when bidding good-bye to his new friend Baranov, " I will always stand up for the Russians whenever anybody dares say anything against them." The plot, such as it is, is thoroughly sustained, the book is carefully written, and the scenes of savage life more particularly, are depicted in a fashion which is realistic in the best sense.