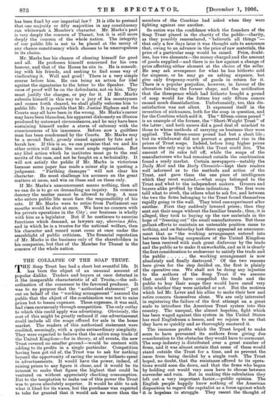 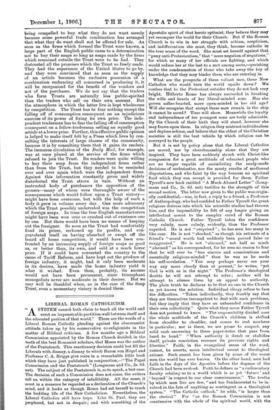 THE COLLAPSE OF THE SOAP TRUST. T HE Soap Trust has

had a short but eventful life. It has been the object of an unusual amount of popular dislike. Traders and buyers at once detected in it the inseparable characteristic of all Trusts,—the sub- oxdination of the consumer to the favoured producer. It was to no purpose that the "authorised statement" put out on behalf of the "working arrangement" assured the public that the object of the combination was not to raise prices but to lessen expenses. These expenses, it was said, had risen enormously through competition. The only outlay to which this could apply was advertising. Obviously, the cost of this might be greatly reduced if one advertisement could include all the soaps offered for sale in the home market. The readers of this authorised statement were credited, seemingly, with a quite extraordinary simplicity. They were expected to believe that the entire soap trade of the United Kingdom—for in theory, at all events, the new Trust covered no smaller ground—would be content with adding to its profits in a single particular. Competition having been got rid of, the Trust was to ask for nothing beyond the opportunity of saving the money hitherto spent in advertisements. It would have the power, indeed, of raising prices to any figure it chose, and it would be its interest to make that figure the highest that could be ventured on without appreciably checking consumption. But to the temptation to make use of this power the Trust was to prove absolutely superior. It would be able to ask what it liked for its wares, but the purchaser was expected to take for granted that it would ask no more than the members of .the Combine had • asked when they wero fighting against one another.

So entire was the confidence which the founders of the Soap Trust placed in the charity of the public—charity, as they possibly remembered, " believeth all things "- that only a few days later it was thought safe to announce that, owing to an advance in the price of raw materials, the price of a particular soap would be raised. Price, doubt,- less, has two elements—the money charged and the amount of goods supplied—and there is no law against a change of price affecting either element at the choice of the seller. He may ask sevenpence for what he has hitherto sold for sixpence, or he may go on asking sixpence, but give only fivepenny-worth of goods in return for it. There is a popular prejudice, however, in favour of the alteration taking the former shape, and the notification that the threepence which had hitherto bought a pound of soap would for the future buy only fifteen ounces caused much dissatisfaction. Unfortunately, too, this dis- satisfaction was not silent. It expressed itself in the invention of nicknames, both for the soap in question, and for the Combine which sold it. The " fifteen-ounce pound" is an example of the former, the "Short-Weight Trust" of the latter ; and both names did a good deal of mischief to those to whose methods of carrying on business they were applied. The fifteen-ounce pound had but a short life ; but its withdrawal did not prevent a general rise in the prices of Trust soaps. Indeed, before long higher prices became the only way in which the Trust could live. The amount of its sales fell off, while the soaps of the manufacturers who had remained outside the combination found a ready market. Certain newspapers—notably the Daily Mail and the Daily Chronicle—kept their readers well informed as to the methods and action of the Trust, and gave them the one piece of intelligence which they most wanted,—what soaps belonged to the Trust and what to the independent makers. Grocers and buyers alike profited by these indications. The first were told what to stock, the others what to ask for, and between the two the firms belonging to the Trust found themselves rapidly going to the wall. They tried one experiment after another. First they suddenly lowered prices ; then they sent out their soaps without the familiar brands ; then, it is alleged, they took to buying up the raw materials in the hope of "freezing out" the small manufacturers. But these gallant efforts to maintain an untenable position came to nothing, and on Saturday last there appeared an announce- ment that as "the working arrangement entered into between the leading soapmakers of the United Kingdom has been received with such great disfavour by the trade and the public as to make it unworkable, and as it is clearly the first consideration to endeavour to satisfy the trade and the public . . . . . . the working arrangement is now absolutely and finally destroyed." Of the two reasons here given for the step decided on, the first is plainly the operative one. We shall not be doing any injustice to the authors of the Soap Trust if we assume that could they have compelled the trade and the public to buy their soaps they would have cared very little whether they were satisfied or not. But the motives which led Mr. Lever and his allies to make their bow and retire concern themselves alone. We are only interested in registering the failure of the first attempt on a great scale to introduce the American Trust system into this country. The unequal, the almost hopeless, fight which has been waged against this system in the United States has read Englishmen a lesson, and we rejoice to see that they have so quickly and so thoroughly mastered it.

The immense profits which the Trust hoped to make seem to have prevented its authors from giving due consideration to the obstacles they would have to surmount. The soap industry is distributed over a great number of firms, and it was almost certain that some of these would stand outside the Trust for a time, and so prevent the issue from being decided by a, single rush. The Trust hoped, no doubt, that the resistance offered to its opera- tions would soon die down, and that the firms who began by holding out would very soon have to choose between surrender and ruin. But in making this calculation they left out a very important factor,—public opinion. The English people happily know nothing of the American disposition to regard the capitalist as a force against which it is hopeless . to struggle. They resent the thought of being compelled to buy what they do not want merely. because some powerful trade combination has arranged that what they do want shall not be offered for sale. As soon as the firms which formed the Trust were known, a. large part of the English public came to a determination not to buy their soaps so long as soaps made by the firms which remained outside the Trust were to be had. They distrusted all the promises which the Trust so freely made. They had the experience of the United States to go by, and they were convinced that as soon as the supply of an article becomes the exclusive possession of a combination embracing all concerned in producing it, it will be reorganised for the benefit of the vendors and not of the purchaser. We do not say that the traders who form Trusts are naturally less public-spirited than the traders who sell on their own account. But the atmosphere in which the latter live is kept wholesome by competition. The Trust has to fear nothing except the falling off of consumption consequent on an injudicious exercise of its power of fixing its own price. The inde- pendent tradesman has to fear the falling off of consumption consequent on a fellow-tradesman selling an equally good article at a lower price. Further, this effective public opinion is helped to make itself felt by a Press which lives by con- sulting the interests of large classes of the community, because it is by consulting them that it gains its readers. The immense circulation of the Daily Mail, for example, was at once placed at the service of the firms which refused to join the Trust. Its readers were quite willing to buy their soap from the independent firms rather than from the Trust, but they needed to be reminded over and over again which were the independent firms. Against this information constantly given and widely distributed the Trust strove in vain. Without an instructed body of purchasers the opposition of the grocers—many of whom were thoroughly aware of the consequences which would follow upon a Trust victory— might have been overcome, but with the help of such a body it grew in volume every day. One more adversary which the Trust possibly underrated was the competition of foreign soaps. In time the free English manufacturers might have been won over or crushed out of existence one by one. But there would have been no means of keeping out the foreigner. So soon as the Trust had comfortably fixed its prices, reckoned up its profits, and con- gratulated itself on having absorbed or swept off the board all home competition, it would have been con- fronted by an increasing supply of foreign soaps as good as, or better than, its own, and sold at a much lower price. If it could have converted the country to the cause of Tariff Reform, and have kept out the produce of foreign industry, it might, had it only been moderate in its desires, have made• the home industry yield it what it wished. Even then, probably, its success would not have been permanent, since triumphant monopolists never are moderate in their desires. But we may well be thankful when, as in the case of the Soap Trust, oven a momentary victory is denied them.