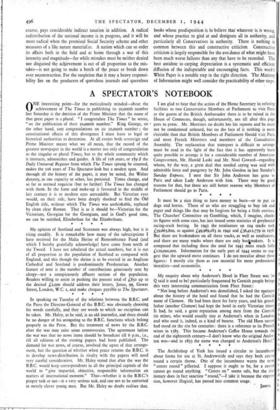 Page 4, 1 December 1944 — My enquiry about why Anderton's Hotel in Fleet Street was
Close

My enquiry about why Anderton's Hotel in Fleet Street was

(as Q said it used to be) particularly frequented by Cornish people brings this very interesting communication from Fleet Street: " Not long before Anderton's was demolished, I asked the Nanager about the history of the hotel and found that he had the Cornish name of Clemow. He had been there for forty years, and his grand- father (another Clemow) had kept the hotel in early Victorian times. It had, he said, a great reputation among men from the Cornish tin mines, who would usually stay at Anderton's when in London. and who used it, indeed, as a kind of bourse. The old Horn taverr had stood on the site for centuries: there is a reference to its Frend wines in 1385. This became Anderton's Coffee House towards the end of the eighteenth century—I don't know who the original Ander- ton was—and in 1833 the name was changed to Anderton's Hotel."