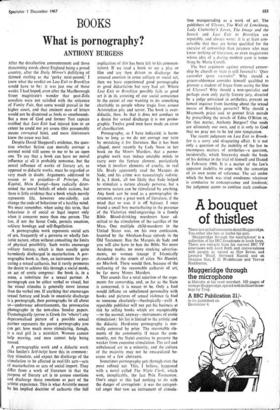 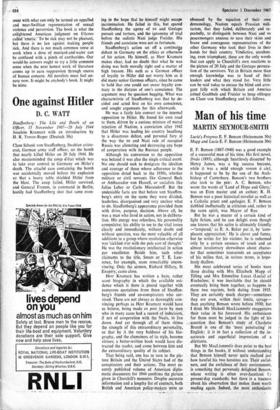 What is pornography? BOOKS

After the devaluation announcement and those threatening words about England being a proud country, after the Daily Mirror's dollifying of thinned sterling as the 'perky mini-pound,' I knew what the verdict on Last Exit to Brooklyn would have to be: it was just one of those weeks. I had hoped, even after the Marlborough Street magistrate's wonder that post-Zola novelists were not satisfied with the reticence of Vanity Fair, that sense would prevail in the higher court, and that eminent men of letters would not be dismissed as fools or smuthounds. But a man of God and former Test captain testified that Last Exit had injured him to an extent he could not yet assess (this presumably means corrupted him), and mere litterateurs knew the cause was lost.

Despite David Sheppard's evidence, the ques- tion whether fiction can morally corrupt a normal mind still seems to me to be an open one. To say that a book can have no moral influence at all is probably nonsense, but the moral influence of works of literary art, as opposed to didactic works, must be regarded as very much in doubt. Arguments addressed to reason or to prejudice—I/ Principe, Das Kapital, Mein Kampf—have radically deter- mined the moral beliefs of whole nations, but there is little evidence that a book which merely represents life, however one-sidedly, can change the code of behaviour of a healthy mind. We must remember, when using this term, that behaviour is of social or legal import only when it concerns more than one person. The law, if not the Scout Code, permits onanism, solitary bondage and self-flagellation.

Pornography, as I have indicated, is harm- less so long as we do not corrupt our taste by mistaking it for literature. But it has been alleged, most recently by Lady Snow in her book on the Moors Murders, that a porno- graphic work may induce unstable minds to carry over the fantasy element, particularly when it involves elements of cruelty, to real life. Brady apparently read the Marquis de Sade, and his crime was nauseatingly sadistic. It is, I think, all too likely that Sade helped to stimulate a nature already perverse, but a perverse nature can be stimulated by anything. Any book can be used as a pornographic in- strument, even a great work of literature, if the mind that so uses it is off balance. I once found a small boy masturbating in the presence of the Victorian steel-engravings in a family Bible. Blood-drinking murderers have ad- mitted to the stimulation of the sacrifice of the Mass. One multiple child-murderer in the United States was, on his own confession, haunted by the Abraham-Isaac episode in the Old Testament., Ban the Marquis de Sade and you will also have to ban the Bible. No more Academy nudes, no more stocking advertise- ments, no women (except if Islamically shrouded) in the streets of cities. No Hamlet, no Macbeth. There would then, because of the outlawing of the reasonable catharsis of art, be far more Moors Murders.

This sounds like a total rejection of the argu- ments for censorship, and, so far as the State is concerned, it is meant to be. Only a fool would inflame an unbalanced personality with books and pictures of sexual violence (a fool or someone absolutely—theologically—evil). A reputable publisher will not put his business at risk by selling books which are recognisably —to the normal, anyway—instruments of erotic stimulation: his list is limited to the artistic and the didactic. Hard-core pornography is nor- mally censored by price. The reasonable ele- ments of the community (I mean the com- munity, not the State) contrive to preserve the weaker from excessive stimulation. The evil and unbalanced are in a minority, and the culture of the majority may not be emasculated be- cause of a few aberrants.

Sometimes pornography gets through even the most refined net. This, I believe, happened with a novel called The Night Clerk, which won, inexplicably, the last Prix Formentor. One's anger at this had nothing to do with the danger of corruption: it was the categori- cal anger that saw an instrument of stimula-

tion masquerading as a work of art. The publishers of Ulysses, The Well of Loneliness, Lady Chatterley's Lover, The Image and the Search and Last Exit to Brooklyn are reputable, and always were: it is at least con- ceivable that they are better qualified for the exercise of censorship than jurymen who may know nothing of literature, or even magistrates whose idea of a daring modern yarn is some- thing by Marie Corelli.

The best argument against external censor- ship by church or state is still Juvenal's: 'Quis custodies ipsos custodes?' Why should a grocer-alderman consider himself qualified to prevent a student of Joyce from seeing the film of Ulysses? Why should a non-specialist and perhaps even only partly literate jury, directed by a judge untrained in aesthetics, prevent an honest inquirer from learning about the sexual mores of Brooklyn perverts? Why should a Maynooth priest seek to protect Irish morals by proscribing the novels of Edna O'Brien or, for that matter, Anthony Burgess? Our souls are ultimately our own, and it is only to God that we pray not to be led into temptation.

The recent judgment on Last Exit to Brook- lyn is a sorry and disquieting affair. It is not only a question of the inability of the law to encompass matters of aesthetics—a question, incidentally, which Sinyaysky made the basis of his defence in the trial of himself and Daniel in February 1966. It is a matter of the law's apparent inability to cope with the semantics of its own terms of reference. The act under which the book was tried condemns whatever is conducive to concupiscence and lewdness; the judgment seems to confuse such conduce-

ment with what can only be termed an appalled and near-Swiftian representation of sexual violence and perversion. The book is what the enlightened American judgment on Ulysses called 'emetic.' To be sick may not be pleasant, but there is no law against making people sick. And there is not much common sense at work when a dose of mustard-and-water can be confused with a pinch of cantharides. Our would-be censors ought to try a little common sense when the next honest work of literature comes up to earn suppression through excess of human concern. All novelists must feel un- easy now. It might be anybody's book. It might be mine.