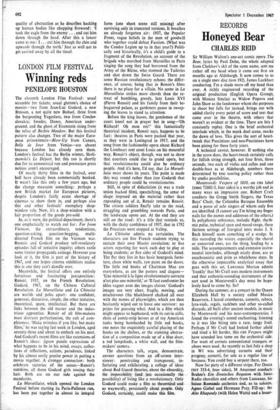 The eleventh London Film Festival: usual scramble for tickets; usual glutton's choice of movies—two from Jean-Luc Godard, a new Bresson, a not quite new Bufiuel, three from the burgeoning Yugoslays, two from Czecho- slovakia; Swedes, Danes, American under- ground, and the ghost of Eisenstein rising from the relics of Bezhin Meadow. But this festival pattern also changes. Two of the major Euro- pean prizewinners—Blow-Up from Cannes, Belle de Jour from Venice—are absent because London has already seen them. London's festival has the Berlin winner, Skoli- mowski's Le Depart, but this too is shortly due for its commercial run and premature press notices aren't encouraged.

Of nearly thirty films in the festival, over half have already been commercially booked. It wasn't like this only a few years ago, but the change measures something: perhaps a new British market for European pictures, despite London's fairly . acute shortage of cinemas to show them in, and perhaps also this and other festivals' exemplary shop- window role. Now, it's a shop-window with a fair proportion of the goods pre-sold.

In, as it were, the political department, there's one emphatically to watch out for: Far from Vietnam, the extraordinary, tendentious, question-asking, question-begging, multi- directed French film on the Vietnam war. Resnais and Godard produce self-revelatory episodes full of tentative inquiry; others rattle some tinnier propaganda coinage. However you look at it, the film is part of the history of • 1967, and one hopes cinema exhibitors realise this is one they can't dawdle over.

Meanwhile, the festival offers one entirely fortuitous and fascinating juxtaposition : Renoir, 1937, on the French Revolution; Godard, 1967, on the Chinese Cultural Revolution. La Marseillaise and La Chinoise are worlds and poles apart: one confident, generous, discursive, simple, the other tentative, theoretical, spare, intellectual. But there are links between the old master and the indus- trious apprentice. Renoir of all film-makers most distrusts perfectionism, the cult of com- pleteness. 'Make mistakes if you like, but make films,' he was saying last week in London, aged seventy-three and about to embark on his next. And Godard's recent films are like extensions of Renoir's ideas: jigsaw puzzle expressions of what happens to be in his mind, essays, collec- tions of reflections, actions, paradoxes, linked by his almost eerily precise power in putting a movie together. A stronger connection: both celebrate victories of the senses—Renoir's sunshine, all those Godard girls tossing their hair. Both are on our side against the mandarins.

La Marseillaise, which opened the London Festival before starting its Paris-Pullman run, has been put together in almost its integral form (one short scene still missing) =after surviving only in truncated versions. It breathes an already forgotten air: 1937, the Popular Front, vague beliefs in the men of goodwill who together could defeat Fascism. (What was the Condor Legion up to in that year?) Politi- cally and historically, it's a child's guide to a fragment of the Revolution, an account of the brigade who marched from Marseilles to Paris singing the song they had borrowed from the Army of the Rhine, who stormed the Tuileries and shot down the Swiss Guard. There are some Russian revolutionary echoes; the differ- ence, of course, being that in Renoir's films there is no place for a villain. No scene in La Marseillaise strikes more chords than the re- treat of bumbling, greedy, lazy Louis XVI (Pierre Renoir) and his family from their be- leaguered palace, as gardeners pause in sweep- ing the leaves to stand to attention.

Before the king leaves, the gentlemen of the court kneel not in prayer but in song—'Oh Richard! Oh mon roil' this fantastically theatrical incident; Renoir says, happens to be fact: theatres in Paris were packed that year, as they were in Leningrad in 1917, and the song from the fashionable opera about Richard the Lionheart sent stout Louis on his mournful way. Renoir's object, though, was not to show that courtiers could rise to grand opera, but that revolutionaries could also be ordinary people. And it's here, I'd say, that La Marseil- laise most shows its years. The point is made this way round rather than (see Godard) that ordinary people could be revolutionaries.

Still, in spite of didacticism (it was a trade union backed film), speechifying, the sense of shape imposed on the material rather than expanding out of it, Renoir remains Renoir. The citizen soldiers finally take to the road, straggling and grumbling towards Paris, and the landscape opens out. At the end they are still on the road: it's a title that reminds us, with the shaky confidence of 1937, that in 1792 the Prussians were stopped at Valmy.

La Chinoise admits no certainties. The characters are five. French students trying to sustain their own Maoist revolution; or five actors reporting for work each day to play at being students; or five sides of Godard's mind. The flat they live in has basic bourgeois furni- ture, clean white walls, raw paint on the doors. The little red books of Chairman Mao are everywhere, as are the posters and slogans- 'Une minoritd a la ligne revolutionnaire correcte n'est plus une minorite,' or faut confronter les idles vagues avec des images claires.' Godard's images are very clear, fragile, moving, and mischievous (the blackboard chalked all over with the names of playwrights, which are then hesitantly wiped out• to leave one survivor: no prizes for guessing who). And in a film which might appear so haphazard, with its cut-in stills, • shots of comic-strip heroes or of toy American tanks being bombarded by little red books, one notes the exquisitely careful placing of the books on the shelves, or the stunning abstrac- tion of a composition made up of a blue door, a red lampshade, a white wall, and the film- makers' camera, • The characters talk, argue, demonstrate, answer -questions from an off-screen inter- viewer: penetrating and transparent, in- furiating and exhilarating, a collage of ideas about Red Guard theories; about the absurdity, the impossibility (and, just occasionally the possibility) of living like a revolutionary. Only Godard could make a film so theoretical and so waywardly, persistently about people. Only Godard, certainly, could make this film.