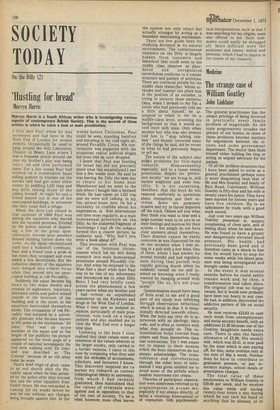 Mervyn Harris is a South African writer who is investigating various aspects of contemporary British Society. This is the second of three articles in which he takes a look at male prostitution.

I first met Paul when he was seventeen and had been in the West End of London for several months. Occasionally he used to hang around the Arts Laboratory Theatre in Drury Lane where I was a frequent visitor around the time my brother's play was being rehea. :ed and then performed there. For a few weeks Paul had worked on a commission basis selling posters to tourists on the streets and had got some other money by peddling LSD trips and pep pills, taking many of the tablets himself. At night he and a friend dossed out in one of the unoccupied buildings, or wherever. else they could find a refuge.

When the Arts Lab closed in that summer of 1969 Paul was among the squatters who moved into the vacated premises. Evicted by the police, instead of dispersing, a few of the group spontaneously moved into another disused building further down the street. As the squat reconstituted itself into a makeshift commune, Paul and a friend took a pride in the room they occupied and even added a few decorations. But the collective identity of the squatters only merged into clearer focus when they moved into an unoccupied building at 144 Piccadilly.

Suddenly the squat became big news in the mass media and crowds of sightseers, reporters, television crews and police waited outside in the forecourt of the building and in the street as the squatters barricaded themselves inside. The occupation of 144 Piccadilly was initiated by a university graduate who became known to the press as the mysterious ' Dr John.' Paul was an active -member of the squat and at the height of the publicity his picture appeared on the front page of a couple of national newspapers. He was seen walking with 'Dr John' and was described as 'The Colonel' because of an old army tunic he wore.

Paul's brief reign of glory came to an end shortly after the Piccadilly squat when he was arrested by the police after they evicted him and the other squatters from Endell Street. He was remanded in custody for six weeks before he was let out without any charges being brought against him. In the weeks before t hristmas, Paul could be seen, standing barefoot and shivering in the cold night air, around Piccadilly Circus. His conversation was peppered with the occasional radical political slogan but even this he soon dropped.

I knew that Paul was hustling for bread but did not precisely know what this entailed until I met him a few weeks later. He said he was leaving the Dilly the next day to return to his home near Manchester land we went to the pub where I bought him a farewell drink. He had taken an LSD trip and we were still talking, in my flat, several hours later. He felt a necessity to confide about his experiences, at first. intermittent and then more regularly, as a male homosexual prostitute on the Dilly. As the scattered fragment of knowledge I had oh the subject formed into a clearer picture, he suddenly said: "Why don't you write a book about it?"

This encounter with Paul was one of the fortuitous circumstances which led me into doing research into male homosexual prostitutes around Piccadilly Circus. And when he returned to the West End a short while later Paul was to be one of my informants and introduced me to other Dilly Boys. I had very briefly come across the phenomenon a few years earlier when my brother and I had written an unpublished manuscript on the Kicksters and drugs in the West End of London. What I then saw as isolated in..stances, particularly of male prostitution, now took on a larger pattern and also enabled me to view the West End over a longer time span.

Listening to the boys I soon realised that their values were an extension of the values inherent in the larger society, only carried to a further extreme. I came to this view by comparing what they said with the attitudes of accountants, solicitors, and lecturers I knew. This discovery inspired me to pursue my research as current crininological theory at university, from which I had recently graduated, then maintained that the values of criminals were against and in opposition to that of the rest of society. To be a rebel, however, more often leaves the system not only intact but actually stronger by .acting as a boundary maintaining mechanism.

There are few guide lines for studying deviance in its natural environment. The subterranean existence on the Dilly is largely hidden from outsiders and behaviour that could seem to the middle class observer as disor dered and unregulated 'nevertheless conforms to a certain structure and pattern of activities.

There are continual pitfalls for the middle class researcher, 'whose attitudes and manner can place him in the position of an outsider, in

trying to uncover these patterns. Once, when I invited to my flat a

youth who had previously told me a little about himself, he attempted to relate to me on a

middle-class level, straining his background so that it would accord more with mine. Only when another boy who was also present told him to "stop talking rubbish" and bluntly corrected some of the things he said, did he revert to what he had previously begun to tell me.

The nature of the subject also' poses problems for first-hand research. Homosexuality especially, and to a lesser extent prostitution, despite the 'permissive society' we are living in, still excites suspicion and even hos tility. It is not surprising, therefore, that the boys do not respond uniformly to questions about themselves and their activities. Some are purposely evasive and try to throw inquirers off the track. Others tell you what they think you want to hear and a large number want to let you in on their feelings and motives for their actions — but simply do not have clear answers about themselves.. Their distrust cannot be easily.

overcome as was illustrated for me on one occasion when I was sit ting in a pub with a few boys. One of them, whom I had known for several months and had regularly seen during that period, was rapidly getting drunk when he suddenly turned on me and in sisted on knowing what I really wanted by hanging around with "people like us. It's not your scene."

Questionnaires would have been of little avail to me and a good part of my study was inferring through observation behaviour, which is social in that it is intentionally directed towards others.

What the boys say they do is in terwoven with an ideology, their code, and is often at variance with what they actually do. This ra tionalisation helps conceal from others and from themselves their real motivations. Yet I was aware not to impute to them motives which the boys themselves do not always acknowledge. The cross reference and corroboration through the other boys of infor mation I was given enabled me to avoid some of the pitfalls which random interviews can create.

Theories of participant observation were sometimes referred to by acquaintances to accuse me, implicitly if not always directly, of being a vicarious homosexual or of voyeurism. Glib psychoanaly tical interpretations, such as that I was searching for my origins, were also offered to me. Such comments could easily be shrugged off. More difficult were the problems and issues, moral and personal, which I had to resolve in the course of my research.