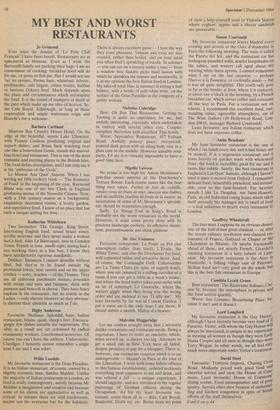 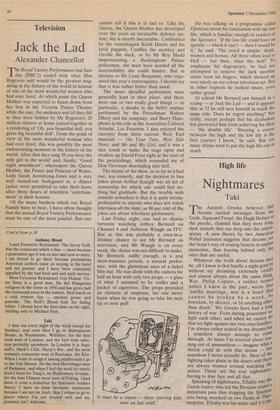 MY BEST AND WORST RESTAURANTS

Jo Grimond Ever since the demise of 'Le Petit Club Francais' I have been bereft. Restaurants are as ephemeral as blossom. Even as I write the Bertorelli family are packing their bags. I am no connoisseur of cooking: breakfast food will do for me, or pasta or fish pie. But I would not say 'no' to caviare, Parma ham, whitebait, lobster, profiteroles, cafe liegois, creme brulde, halibut or luscious Orkney beef. Much depends upon the place and circumstances which accompany the food. It is the sound of trumpets as much as the pate which make up my idea of heaven. So, the Cafe Royal, Edinburgh, so long as those resplendent and ample waitresses reign and Bianchi's for a welcome.

Barbara Cartland Sharrow Bay Country House Hotel: On the edge of the beautiful, mystic Lake Ullswater, with Francis Coulson producing original and superb dishes, and Brian Sack watching over one like a benevolent Genie, stands this marvel- lous hotel and restaurant. This is one of the most romantic and exciting places in the British Isles. The food defies description, and I can only say it is the 'ambrosia of the Gods'.

Le Manoir Aux Quat' Saisons: When I was writing my fifth cookery book — 'The Romance of Food' at the beginning of the year, Raymond Blanc was one of the few Chefs in England producing menus of the Nouvelle Cuisine. Now, with a 15th century manor as a background. exquisitely decorated rooms, a lovely garden, and superlative food, I know of no place that has such a unique setting for love.

Two favourites: The Grange, King Street. Interesting English food, sound house wines, terrific welcome and they never make a woman feel a fool. Also Le Bistroquet, new in Camden Town. French in tone, smells right; having had a son working there as a bus boy, I know they have satisfactorily rigorous standards.

Dislikes: Instances I cannot describe without libel, • but they're to be found outside big provincial towns, near resorts and on the upper retches — sorry, reaches — of the Thames. They are all elaborate parchment menus, avocados with cream and nuts and bananas, duck with pawpaw and broccoli in cheese. They have fancy napkins in the restaurant, but no towels in the Ladies — only electric blowers; so they obvious- ly distrust their clientele as much as I do.

Willie Landels My favourite restaurant is the Gran Paradiso. It is an Italian restaurant, of course, owned by a slightly eccentric man, Sandro Maldini. Unlike the majority of Italian restaurants in London, its food is really contemporary, mainly because Mr Maldini is imaginative and creative and because some of his clients are appreciative as well as critical. In autumn there are wild mushrooms, maybe not for everyone but for the habitues. There is always excellent game — I love the way they roast pheasant. Salmon and trout are also roasted, rather than boiled, and on your salad you often find a sprinkling of rucola. In summer — you can cat on a terrace under a vine — from a window box Sandro picks basil leaves with which he sprinkles the tomato and mozzarella. It is in my opinion the best Italian food in London. My idea of total bliss in summer is eating a half tobster, with a bottle of cold white wine, on the terrace of the Gran Paradiso in the company of a pretty woman.

Nicholas Coleridge Best: Oh Boy Thai Restaurant. Getting to Tooting is quite an expedition for me, but awfully interesting, especially when undertaken in convoy with several other cars. Couples complete discretion with excellent Thai fondu.

Worst: September Restaurant, 457 Fulham Road. Awfully poncey place, overpriced, painted dark green with an ailing holly tree in a glass case in the middle. However amiable your party, I'd say it is virtually impossible to have a good time here.

No praise is too high for Anton Mosimann's prix-fixe menu surprise at the Dorchester's Terrace Room. Each course tastes like the best thing ever eaten. Parfait de foie de volaille, rendez-vous de fruits de mer, saucisse aux huitres and an ineffable feuillete de fruits de la saison: an incantation of some of M. Mosimann's speciali- ties should be temptation enough.

Sadly, Le Mange-Tout in King's Road is probably not the worst restaurant in the world. However, it must come pretty close with its precious landscape cookery, its offensive dainti- ness, pretentiousness and sham glamour.

Sir Alec Guinness Favourite restaurants: La Poule au Pot (for atmosphere rather than food), L'Etoile, the White Tower, and also the Dorchester for food, well separated tables and attractive decor. And, of course, the Connaught Grill. Unfavourites are La Tante Claire (in spite of superb food), where you are jammed in a stifling corridor of a room if you can get a table at a week's notice, and where the head waiter takes your order with an air of contempt; Le Gavroche, where the waiters giggle when they bring you the wrong order and are inclined to say '0 silly me!'. My least favourite by far was in Covent Garden. I put a curse on it the only time I ate there. It closed within a month. Maitre d's beware.

Let me confess straight away that I intensely dislike restaurants and restaurant meals. Being a vegetarian, I have to order an omelette, which, when served up, is always too big. Attempts to get a small ont in New York have all failed, despite promises to pay for a whopper. There is, however, one restaurant occasion which is to me unforgettable — Maxim's in Paris at the time of the Liberation. I went with some fellow-officers to this famous establishment, ordered recklessly everything most expensive to eat and drink, and was refused a bill — a unique experience, I should suppose, and not unrelated to the regular patronage of German officers during the Occupation. As for my least favourite res- taurant, count them all in — Ritz, Cafe Royal, Boulestin, Etoile etc. etc. Better from my point

of view a help-yourself joint in Victoria Station where yoghurt, apples and a cheese sandwich are procurable.

My favourite restaurant leaves Madrid every evening and arrives at the Garc d'Austerlitz in Paris the following morning. The train is called the Puerta del Sol, and the restaurant car has mahogany-panelled walls, scarlet lampshades on the tables, and waiters (all aged about 60) wearing white linen aprons. I cannot remember what I ate on the last occasion — perhaps Huevos a la flamenca, or cochinillo asado — but it was all quite delightful. This coach only goes as far as the border at Irun, where it is replaced, at about two o'clock in the morning, by a French breakfast car, which serves coffee and croissants all the way to Paris. For a restaurant not on wheels, I recommend the excellent food, out- standing value, agreeable atmosphere, etc of The Wine Gallery (49 Hollywood Road, Lon- don SW10, manager Richard Courtauld).

Least favourite: any Italian restaurant which does not have expresso coffee.

My least favourite restaurant is the one at which I eat lunch every day and it had better not he named. It is a vegetarian restaurant and it leans heavily on quiches made with wholemeal flour; the food is incredibly good for me and it tastes like rubble. Surely, the best restaurant in England is Les Quat' Saisons, although I haven't tried it since it moved from Oxford. I remember delicate food, beautifully presented, and irresist- able even to the faint-hearted. For heartier moods I like Le Dauphin, rue Saint-Honore, Paris, an old-fashioned eating house which takes itself seriously but manages not to smell of food — a feat unknown to nearly every restaurant in London.

The best must I suppose be an obvious choice: one of the half-dozen great classical — or after the recent culinary revolution neo-classical res- taurants of France, Guerard or Chapel or the Chaumiere in Rheims. Or maybe fractionally ahead of these, not strictly French, Girardet's amazing restaurant in a tatty suburb of Laus- anne. My favourite restaurant is the Arco in Ponticello, a fishing village east of Palermo. Sicilian food isn't very good on the whole but this is the best fish restaurant in Europe.

Best restaurant: The Ristorante Italiano, Cur- zon St, because the atmosphere is private and the food arrives quickly.

Worst: San Lorenzo, Beauchamp Place, be- cause it isn't and it doesn't.

My favourite restaurant is the Gay Hussar, although I have recently become very fond of 11 Passetto. Victor, with whom the Gay Hussar will always be associated, is unique in my experience in treating all women as though they were LadY Diana Cooper and all men as though they were Terry Wogan. In other words, we all feel very much more important under Victor's treatment.

Favourite: Trattoria Imperia, Charing Cross Road. Modestly priced with good food and cheerful service and near the House of Com- mons. Least favourite: House of Commons dining rooms. Food unimaginative and of poor quality. Service often slow because of understat- fing and kitchen congestion in spite of heroic efforts of the staff themselves.

Cont'd on p.44 Cont'd from p.38 Anthony Blond Least Favourite Restaurant: The Savoy Grill. Not the restaurant which is fine — more because a generation ago it was so nice and now so nasty. I am forced to go there because pretentious American authors insist on staying in the hotel and my partner and I have been constantly appalled by the bad food and and surly service.

Most Favourite Restaurant: Gay Hussar. Vic- tor Sassy is a good man. He fed Hungarian refugees in the street in 1956 and has given half the restaurant away to the waiters. Best lunch on a cold winters day — smoked goose and pancake. The Bull's Blood hole for fading lefties. I always have the first table on the right, yielding only to Michael Foot.

Taki I dine out every night of the week except for Sundays, and even then I go to Bishopstrow House, in Warminster, Wiltshire, for the best food west of London. and the best wine selec- tion probably anywhere. In London it is Aspi- nall's, Mark's Club, Harry's Bar, and the most romantic restaurant west of Ruritania, the Ritz. When I want to rough it among intellectuals I go to the Gay Hussar, for the best Hortobagyi west of Budapest, and when I feel the need for exotic food I head for Tang's, on Shaftesbury Avenue, for the best Chinese meal west of Peking. (And there is even a reduction for Spectator readers there). I have no least favourite restaurant because I am not an Arab, thus I refuse to go to places where I'm not treated well and my presence isn't welcome.