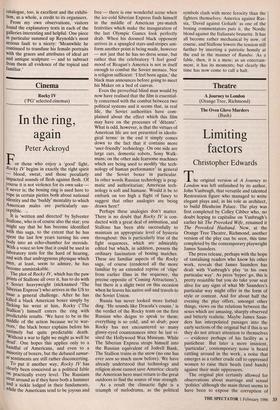 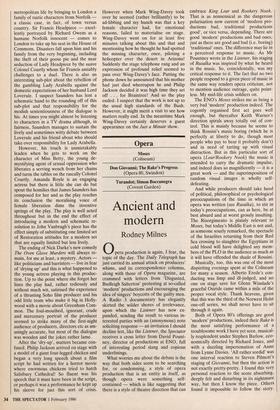 The original version of A Journey to London was left unfinished by its author, John Vanbrugh, that versatile and talented Restoration figure who managed to write elegant plays and, in his role as architect, to build Blenheim Palace. The play was first completed by Colley Cibber who, no doubt hoping to capitalise on Vanbrugh's earlier hit The Provoked Wife, renamed it The Provoked Husband. Now, at the Orange Tree Theatre, Richmond, another version of the play can be seen, this time completed by the contemporary playwright James Saunders.

The press release, perhaps with the hope of tantalising readers who know his other work, reveals that James Saunders has dealt with Vanbrugh's play 'in his own particular way'. As press 'hypes' go, this is pretty resistible but you do take your seat alive for any signs of what Mr Saunders's particular way might offer in the form of style or content. And for about half the evening the play offers, amongst other things, views on the relations between the sexes which are amusing, sharply observed and bitterly realistic. Maybe James Saun- ders has interpolated passages into the early sections of the original but if this is so they do not attract attention to themselves — evidence perhaps of his facility as a pasticheur. But later a more insistent, `particular', contemporary noise is heard rattling around in the work, a noise that emerges as a rather crude call to oppressed women to raise their heads (and hands) against their male oppressors.

The original plot certainly allowed for observations about marriage and sexual `politics' although the main thrust seems to have been to expose the corruption of metropolitan life by bringing to London a family of rustic characters from Norfolk a classic case, in fact, of town versus country. Sir Francis Headpiece — excel- lently portrayed by Richard Owens as a humane Norfolk innocent — comes to London to take up his seat in the House of Commons. Disasters fall upon him and his family from the very beginning, including the theft of their goose pie and the near seduction of Lady Headpiece by the suave Colonel Courtly whom Sir Francis amiably challenges to a duel. There is also an interesting sub-plot about the rebellion of the gambling Lady Arabella against the domestic expectations of her husband Lord Loverule. I suspect Saunders has lent a schematic hand to the rounding off of this sub-plot and that responsibility for the modish sententiousness of the dialogue is his. At times you might almost be listening to characters in a TV drama although, in fairness, Saunders manages to sustain the lively and sometimes witty debate between Loverule and his friend about who should take over responsibility for Lady Arabella.

However, his touch is unmistakably leaden when he gets to work on the character of Miss Betty, the young de- mystifying agent of sexual oppression who liberates a serving wench from her chains and turns the tables on the rascally Colonel Courtly. Amanda Royle is an engaging actress but there is little she can do but spout the homilies that James Saunders has composed for her and as the play reaches its conclusion the moralising voice of female liberation dims the inventive springs of the play. The play is well acted throughout but in the end the effect of introducing a modern and schematic re- solution to John Vanbrugh's piece has the effect simply of substituting one limited set of Restoration attitudes for a modern set that are equally limited but less lively.

The ending of Nick Darke's new comedy The Oven Glove Murders will always re- main, for me at least, a mystery. Actors like politicians and barristers — live in fear of 'drying up' and this is what happened to the young actress playing in this produc- tion. Up to the point where she forgot her lines the play had, rather tediously and without much wit, satirised the experience of a thrusting Soho film producer and his odd little team who make it big in Holly- wood with a movie about Greenham Com- mon. The foul-mouthed, ignorant, crude and mercenary portrait of the producer seemed to strike many of the first-night audience of producers, directors etc as am- usingly accurate, but most of the dialogue was wooden and the jokes rather lame.

After the 'dry-up', matters became con- fused. Philip Jackson arrived on stage with a model of a giant four-legged chicken and began a very long speech about a film script he had written for a horror movie where enormous chickens tried to hatch Salisbury Cathedral! So fluent was his speech that it must have been in the script, or perhaps it was a performance he kept up his sleeve for just this sort of crisis. However when Mark Wing-Davey took over he seemed (rather brilliantly) to be ad-libbing and my hunch was that a key female character had, for emotional reasons, failed to materialise on stage. Wing-Davey went on for at least five minutes talking about this and that and mentioning how he thought he had spotted the missing character, once, piloting a helicopter over the desert in Arizona! Suddenly the stage telephone rang and an expression of profound relief seemed to pass over Wing-Davey's face. Putting the phone down he announced that his mother had just died whereupon he and Philip Jackson decided it was high time they set off . . . for Braintree! And so the play ended. I suspect that the work is not up to the usual high standards of the Bush. However, it might merit a visit to see how matters really end. In the meantime Mark Wing-Davey certainly deserves a guest appearance on the Just a Minute show.