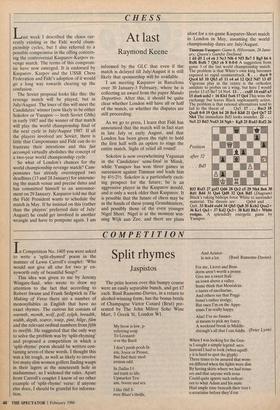 Last week I described the chaos cur- rently existing in the Fide world cham- pionship cycles, but I also referred to a possible compromise in the offing concern- ing the controversial Kasparov-Karpov re- venge match. The terms of this comprom- ise have now emerged. It is endorsed by Kasparov, Karpov and the USSR Chess Federation and Fide's adoption of it would go a long way towards clearing up the confusion.

The Soviet proposal looks like this: the revenge match will be played, but in July/August. The loser of this will meet the Candidates' winner (now likely to be either Sokolov or Yusupov — both Soviet GMs) in early 1987 and the winner of that match will play the world championship final of the next cycle in July/August 1987. If all the players involved are Soviet, there is little that Campomanes and Fide can do to frustrate their intentions and this fait accompli virtually abolishes the concept of a two-year world championship cycle.

So what of London's chances for the world championship revenge match? Cam- pomanes has already overstepped two deadlines (13 and 24 January) for announc- ing the match venue and precise dates and has committed himself to an announce- ment on 29 January. Kasparov told me that the Fide President wants to schedule the match in May. If he insisted on this (rather than the players' preferred date of July/ August) he could get involved in another wrangle and have to postpone again. I am informed by the GLC that even if the match is delayed till July/August it is still likely that sponsorship will be available.

I am meeting Kasparov in Barcelona over 30 January-3 February, where he is collecting an award from the paper Mundo Deportivo. After this, it should be quite clear whether London will have all or half of the match, or whether the disputes are still proceeding.

As we go to press, I learn that Fide has announced that the match will in fact start in late July or early August, and that London has been given the right to hold the first half with an option to stage the entire match. Sighs of relief all round!

Sokolov is now overwhelming Vaganian in the Candidates' semi-final in Minsk, while Yusupov has won three games in succession against Timman and leads him by 41/2-21/2. Sokolov is a particularly excit- ing prospect for the future; he is an aggressive player in the Kasparov mould, and is only a week older than Kasparov. It is possible that the future of chess may be in the hands of these young Grandmasters, and possibly those of the even younger Nigel Short. Nigel is at the moment win- ning Wijk aan Zee, and there are plans afoot for a six-game Kasparov-Short match in London in May, assuming the world championship dates are July/August.