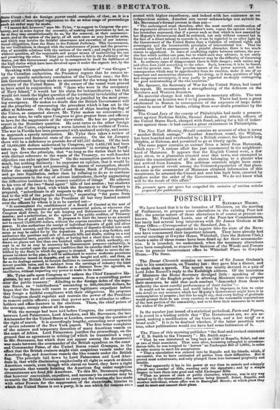 The Dorset Chronicle contains an account of Sir James Graham's

visit to his constituents, on Tuesday last : they gave him a dinner, and he made them a speech. The speech was mostly devoted to a quiz of Lord John Russell's reply to the Endsleigh address. Of the intentions of Ministers the Home Secretary divulged little : speaking of the generosity of the English people in allowing Ministers time to prepare their measures, he said that such conduct "demanded from those in authority the most careful performance of their duties "—

It would not be expected, and would indeed be improper, in him to enter into detail on any measures which her Majesty's Government might have it in contemplation to propose ; but this he might say, that every feeling of gratitude would prompt them to use every exertion to meet the reasonable expectations of the bat portion of the community, and so to form their measures as to meet the wishes of the public.