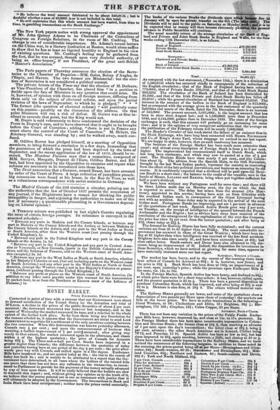 Connected in point of time with a rumour that our Government were about to demand satisfaction of the United States for the detention and trial of APLzoo, a decline in the prices of the public Securities of about per. cent. occurred; the downward movement was however but temporary, and m the course of Wednesday the market recovered its tone, and a reaction to the whole extent of the decline took place. So far from there being any foundation fur the rumour alluded to, it appears that the Government are about to send Lord AsunURTON to negotiate for a settlement of the only questions existing between the two countries. When this determination was known yesterday afternoon, Consols rose per cent. ; and upon the commencement of business this morning, a further improvement of per cent"' occurred ; after giving way nearly to that extent, the market recovered again in the afternoon, and closes within of the highest quotation ; the price of Consols for Account being 89i 4. The Three-and-a-half per Cent. Stocks have improved in a greater degree than Consuls; the difference between the quotation of today and yesterday having been at one period of the day per cent.: the price after- wards gave nay with Consols, and rallied again in a like degree. Exchequer Bills have improved 4s.' and are quoted today at 16s.: the rise in the course of today has been 2s. ; and is mainly to be attributed to a report that the Go- vernment have determined, in all cases where the holders of the tainted bills can prove that there has not been any collusion in the transaction, to recom- mend to Parliament to provide for the payment of the money actually advanced by way of loan upon them. It will be easily believed that the holders are slow to discredit this report ; and, without giving any opinion as to the truth of it, we believe that the course pointed out is one so consonant with justice that it will ultimately be adopted by the Government. The transactions in Bank and India Stock have been unimportant ; neither have the prices varied materially. The books of the various Stocks the dividends upon which became due in January will be open for private transfer on the 6th (Thi .day nest.) The Dividends will be paid to the public on Saturday or Monday week ; and it is to be expected that as money will then become extremely plentiful, the present advance in Public Securities will continue.

The usual monthly return of the average circulation of the. Bank of Eng- land and Private and Joint Stock Banks in England and Wales, for the foul; weeks ending 11th December 1841, is as follows.

As compared with the last statement, (November lath,) there is a diminution of 1,540,912/. which has occurred chiefly in consequence of the reduction of the English circulation ; that of the Bank of England having been reduced 773,000/., that of Private Banks 570,5121., and that of the Joint Stock Banks

exchanges is such, that this amount will probably go on increasing for some time; and it is the opinion of very competent authorities that the average on the publication of the February return will be nearly 7,000,000/. The Banker's Circular of last week stated the failure of an eminent firm in the Stock Exchange, who have long been connected with Messrs. NICHOLSON' and Co. of King's Anna Yard, whose stoppage we noticed in our last report. We are happy to state, however, that no such insolvency has occurred. The business of the Foreign Market has been much more extensive than usual; and almost every description of Foreign Stock is from 4 to 3 per cent.

higher. The improvement has communicated itself to Dutch Stock, which

has long been stationary, and which may now be quoted at a rise of 4 per cent. The Mexican Bonds have risen nearly 3 per cent., and the Colum-

bian about 14. The advices from the Spanish Main, to the 18th November, brought by the last West Indian packet, represent the country as recovering from the effect of the late political convulsions, and business as returning its old.

course. It is confidently expected that a dividend will be paid upon the Mexi- can Bonds in a short time ; the balance to the credit of the republic, now in the hands of Messrs. LIZARDI and BARING, being when put together sufficient for half-a-year's dividend. We have been without any Portuguese mail for some time; and there will be three Lisbon mails due on Monday next, the day on which the first is expected to arrive. The delay has arisen from the steamer (the Mon- trose), appointed to this service, having been sent on from Gibraltar with- the overland Indian mail, in consequence of the Great Liverpool having met with an accident. Some delay may be expected in the arrival of the next Indian mail. Portuguese Bonds are improving, and are 1 per cent, in advance' of the quotations of last week. Spanish Active Bonds gave way 4 per cent. on Tuesday, on the receipt of intelligence of the quarrel between the French Ambassador and the Regent ; but as advices have since been received of the conclusion of the arrangement for the capitalization of the over due Coupons, the price has risen 14 per cent. from the lowest quotation; and after being at' 254, closes today at 254 4. The demand for Railway Shares has been fully maintained; and the current varieties are from 21. to 6/. higher than on Friday. The most remarkable im- provement has occurred in those of the Great Western ; which have been to- day at 6/. higher than when intelligence was received of the late fatal accident. Brighton have also risen nearly 21., and have been currently done at 404; but close rather lower. South-eastern and Dover have also advanced to 194 dis- count, being an improvement of Si. Indeed, the disposition for investment in these Securities, which we have noticed as growing for some time, appears to

have materially increased since our last report.

The market has been heavy, and in the course of the morning there have been sellers of Consols for Account at 894; it is, however, now firmer, and the price is 894 4. Bank Stock has been done at 1664, an improvement of per cent, upon yesterday's price ; while the premium upon Exchequer Bills is the same, viz. 14s. to 16s.

In the Foreign Market, Spanish Active has been heavy, and declined to 244; at which price there were for a short time sellers: it has, however, rallied again, and the present quotation is 25 to There has been a genersedisposition to purchase Colombian Stock, which has improved, and after being at 224 is now 22 to 4. Mexican is also firm, at 284 9. The others without material vari- ation.

The Railway Shares generally are lower, and some of the quotations show a depreciation ot two pounds per Share upon those of yesterday: the markets are firm at the lower prices. We have to notice transactions in the following'— Great Western, at 88; Cheltenham and Ditto, 18; Brighton, 394 4; Bir- mingham, 170 169; Croydon, 12i ; Cobra Copper, 35 per Share.

There has not been any variation in the prices of the Public Funds. Exche- quer Bills have, however, improved lc, and close at 15r. to 17s. premuim. In the Foreign Market there has been some considerable transactions in Colom- bian and Mexican Bonds ; the former close at 224 4, thus marking an advance of 1 per cent. upon the day's transactions ; the latter close at 2944, being per cent. advance ; the other South American are in demand, Chilian being 70 72, and Peruvian 15 16. Spanish Active has been as low as 24L, but has since improved to 254, again receding, however, a little, and closing at 25 to 4. There have been considerable transactions in the Railway Shares, and we have noticed the occurrence of the following bargains, in addition to those noted in the morning, the prices quoted being all at per Share—Birmingham and Glou- cester, 644; South-western, 60 59; Manchester and Birmingham, 284; Mid- land Counties, 854; Northern and Eastern, 63; South-eastern and Dover, 224 3 ; York and North Midland, 934.