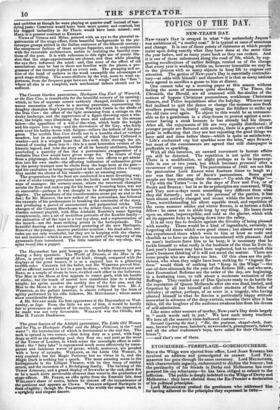 NEW-TEAR'S DAY is arrayed in what "the melancholy Jaques" was ambitious .4 "a motley coat." It is typical at once of sameness

and change. It is one of those points of existence at which people insist upon doing exactly what they have done at the same time the year before, and as many years back as they can reckon. And it is one of those milestonek along the road of life, which, by sug- gesting recollections of earlier feelings, remind us of the change that every year is working within us, however insensible we may be to the process with so many objects in busy life to engross our attention. The genius of New-year's Day is essentially contradic- tory—at odds with himself: and therefore it is that so many nations have agreed to sacrifice a goose to him at dinner. One cannot take up a morning paper at this season without feeling the sense of sameness quite shocking. The Times, the Chronicle, the Herald, are all crammed with fac-similes of the notices of bygone Christmas pantomimes, workhouse Christmas dinners and Police inquisitions after the holyday. Whoever may feel inclined to quit the dance or change the measure sees fresh revellers pouring in, lustily calling upon the fiddlers to strike up the old tune over again. To object to this would be as unreason- able as for a gentleman in a chop-house to protest against a new- comer having a steak because he has already had his dinner. After all, the enjoyments of life are very equally distributed : if younger people are fluttered with novelty, there is a grave owl-like pride in reflecting that they are but repeating the good things we have said and done before them—which is quite as satisfactory. "Life's enchanted cup. but sparkles near the brim," says BYRON ; but most of the connoisseurs are agreed that still champagne is preferable to sparkling. With all this iteration, an onward movement in human affairs can still be detected. The repetition is not quite the same, There is a modification, so slight perhaps as to be impercep- tible in one or two years, but which becomes prononce after a recurrence of many years. The pantomimes of 1842 are not like the pantomime Lord ELDON went fourteen times to laugh at ; nor was that like one of Ricies pantomimes. Some good people are busy straining their throats—" Up with the Whigs "— " Up with the Tories "—as in the days of PITT and Fox, or of Swirr and STEELE : but in so far as principles are concerned, Whig and Tory now-a-days mean something very different from what they did formerly ; and as to the personel of the parties, it has been almost entirely changed and recast within the last ten years. Time, notwithstanding his silent equable tread, and repetition of the same summer smiles and winter frowns, is at bottom a fickle fellow : he cares not to abide long by any thing. He bears down upon us, silent, imperceptible, and cold as the glacier, which with all its apparent fixity is lapsing down into the valley.

It is all very fine to declaim against the frivolity of being pleased with novelty. There would be a kind of ingratitude, certainly, in forgetting old times which were good times ; but almost every one has experienced times which were to him at least so rude and churlish as to have no claim to be remembered with pleasure. And as man's instincts force him to be busy, it is necessary that he tackle himself to what really is the business of the time he lives in. Last year's business may have been neglected, but to overlook this year's business thinking of it will not mend the matter. There are some people who are always too late. Of this class are the poll,- ticians, who when they might have been striking for "Organic Re- form would think of nothing but "Keep in the Whigs "—the out-of-date almanack for the year of the Reform Bill; and who now, that Economical Reforms are the order of the day, are beginning, in a hesitating tone, to talk about a moderate extension of the Suffrage. They remind one of Don Quixote ready to do battle for the reputation of Queen Melisenda after she was dead, buried, and forgotten by all but himself and other students of the folios of chivalry; or rather, perhaps, of an actor in a tragedy, who having planted himself in what he fancies a particularly happy attitude somewhat in advance of the drop-curtain, remains there after it has fallen, till the laughter of the audience awakens him from his dream of self-admiration.

Like some other wearers of motley, New-year's Day deals largely in " sooth words said in jest." We love such merry teachers. We love all the season's time-hallowed customs— Servant (opening the door.) " Sir, the postman, chapel-clerk, dust- man, brewer's drayman, butcher's, newsvender's, greengrocer's, baker's, and all the other tradesmen's boys, have called for their Christmas- boxes.")

and that's one of them.