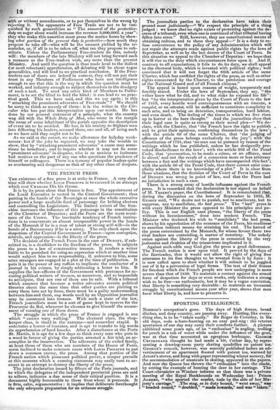 Tun existence of a free press is at stake in France. A very short lime will show whether LOUIS PHILIPPE 15 to succeed in an attempt which cost CHARLES Dix his throne.

It is by its press alone that France is free. The appointment of the Local Executive is vested in the Central Government ; thus putting in the hands Of the Sovereign at once the whole executive power and a large available fund of patronage for bribing electors and controlling the Legislature. The limited extent of the fran- chise increases the influence of this patronage in the constitution of the Chamber of Deputies ; and the Peers are the mere nomi- nees of the Crown. The inevitable tendency of French institu- tions is to concentrate an almost irresponsible power in the hands of the Monarch if he is a man of talent or strong self-will—in the hands of a Bureaucracy if he is a ninny. The only check upon the despotism of thd Central Government in France—upon corruption, misrule, and oppression—is the liberty of the press.

The decision of the French Peers in the case of DIIPOTY, if sub- mitted to, is a deathblow to the freedom of the press. It subjects the press to a law of constructive treason. It renders a writer liable to be punished for using an expression which at another time would subject him to no responsibility, if, unknown to him, some utter strangers are engaged in a plot at the time of publication. It puts it in the power of any ruffian to implicate the conductor of a Journal in his crimes, by simply addressing a letter to him. It supplies the law-officers of the Government with pretences for ac- cusing political writers of treason, so numerous, and so impossible to anticipate, that not one of them can be safe. With a tribunal which assumes that because a writer advocates certain political theories about the same time that other parties are plotting to carry them into act by force, there must be a guilty understanding between him and them, any words used by an Opposition journalist may be construed into treason. With such a state of the law, French journalists must be a sort of game kept in reserve for the Procureur du Roi, whenever he chooses to give himself the amuse- ment of running one of them down. The struggle in which the press of France is engaged is one which " causes wary walking." The electoral class, the shop- keeper class, is timid in the extreme—and somewhat stupid. It entertains a horror of emeutes, and is apt to transfer to big words.., its apprehension of hard knocks. After a disturbance at the Porte St. Martin, it is apt for a few days to think every man who puts in a word in favour of giving the parties arrested a fair trial, an ac- complice in the insurrection. The adherents of the exiled family, at least those of them who are members of the House of Peers, seem inclined to make common cause with Louis PHILIPPE to put down a common enemy, the press. Among that portion of the French nation which possesses political power, a temper prevails at this moment which a cunning statesman may easily turn to ac- count in an attempt to destroy the liberty of the press. The joint declaration issued by fifteen of the Paris journals, and to which the delegates of the independent provincial press are said to adhere, indicates a due sense of their critical position. It is a document highly honourable to those from whom it proceeds. It is firm, calm, argumentative : it implies that deliberate forethought the only adequate preparation for an arduous struggle. • The journalists parties to the declaration have taken their ground most judiciously—" We respect the principle of a thing judged : we know that no right exists of protesting against the de- crees of a tribunal, even when one is convinced of that tribunal having fallen into error." Still, however, they see constitutional means of obtaining redress, and to them they appeal—" It is a duty to re- fuse concurrence to the policy of any Administration which will not repair the attempts made against public rights by the laws of September, as well as by the last decree of the Court of Peers. In this situation we appeal to the Chamber of Deputies : we hope that it will rise to the duty which circumstances force upon it. And if, contrary to all expectations, it fails to do its duty, we shall appeal to the electoral body, which is invested with political rights ; well convinced that it will not forget the 66th article of the same Charter, which has confided the rights of the press, as well as other rights consecrated by the Charter, to the patriotism and courage of the National Guard and of all French citizens."

The appeal is based upon reasons of weight, temperately and forcibly stated. Under the laws of September, they say, the writer knew what he did, and to what risks he exposed his life": but "by the interpretation given by the Court of Peers to the law of 1819, every hostile word contemporaneous with an emeute, a complot, or an attentat, will be sufficient to constitute complicity in such acts, and to bring on detention, transportation' hard labour, and even death. The feeling of the times in which we live rises up in horror at the bare thought." And the journalists show that their legal case is quite as strong as their moral plea—" We de- clare, with the Charter, that the French have the right to publish and to print their opinions, conforming themselves to the laws'; with the article 69 of the same Charter, that the judging of offences of the press belongs exclusively to the jury'; with the Constitution of 1791, that `no man can be pursued by reason of the writings which he has published, unless he has designedly pro- voked disobedience to the laws': with the article 202 of the Penal Code, that 'provocation, to be made a crime, or an offence, must be direct,' and not the result of a connexion more or less arbitrary between a fact and the writings which have accompanied this fact'; with the article 60 of the Penal Code, that there cannot exist com- plicity where there is no knowledge of a plot." It is. clear from those citations, that the decision of the Court of Peers in the case of DOPOTY was wrong in point of law, and that the Peers had no jurisdiction in such a case. There is a strong array of hostile influence against the French press. It is remarked that the declaration is not signed on behalf of M. TH/ERS'S paper, the Constitutionnel. It is remembered that, during the discussion on the laws of September in 1835, M. GD1ZOT said, "We desire not to punish, not to ameliorate, but to suppress, nay to annihilate, the bad press." The "bad" press is with every Minister the press opposed to his principles and po- licy. This is our English cant phrase, "the liberty of the press without its licentiousness," done into modern French. The Minister who declared his wish to "annihilate" the bad press, shows by his approbation of the sentence of the Peers, his readiness to sanction indirect means for attaining his end. The hatred of the press entertained by the Monarch, for whose favour these two rival leaders are contending, is matter of notoriety. The unholy union against the liberty of the press is cemented by the very jealousies and rivalries of the triumvirate implicated in it. Against such odds may God give the press a good deliverance. The French nation is now upon trial. It proved by the days of the Barricades, that it would not allow the right of giving free utterance to its free thoughts to be wrested front it by force : it is now called upon to show whether it will submit to be juggled out of it by a perversion of legal forms. The test of their fitness for freedom which the French people are now undergoing is more severe than that of 1830. To maintain a contest against the armed force of despotism for days or even weeks, only indicates a strong wish to be free—an enthusiastic, but it may be a vague conviction, that liberty is something very desirable : to maintain an incessant struggle by constitutional means year after year, shows that men know what liberty is, and bow to preserve it.