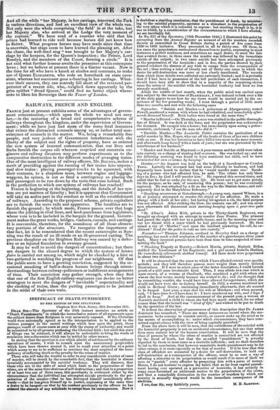 FRANCE just at present exhibits some of the advantages of govern- ment concentration,—which upon the whole we need not envy her,—in the maturing of a broad and comprehensive scheme of railways throughout the kingdom, under the supervision of Govern- ment; while we have just had more of the many fatal instances that evince the distracted counsels among us, or rather total non- existence of counsels in the matter. We, being a remarkably free people, and very jealous of Government interference with the liberty of the subject and the rights of property, have so ordered the new system of internal communication, that our lives and limbs furnish the corpus vile whereon sceptical and uncertain en- gineers and railway directors may perform experiments as to the comparative destruction in the different modes of arranging trains. One of the most intelligent of railway officers, Mr. BRUNEL, makes a merit of providing against the running of fast trains into unpunc- tual slow trains : placing passenger-trucks to be squeezed, with their contents, to a shapeless mass' between engine and luggage- waggons, he opines, is not so fatal a contingency as placing the said passengers to be run down by the train that runs behind. Such is the perfection to which our system of railways has reached!

France is beginning at the beginning, and the details of her sys- tem are yet matters of futurity ; but it is apparent that Government will take an active part in the conduct as well as the establishment of railways. According to the proposed scheme, private capitalists are to furnish the mere rails and apparatus. The localities are to furnish the ground ; by which mode, France passes over that huge abuse the jobbing in rival lines, and land-purchases from legislators, whose vote is to be included iu the bargain for the ground. Govern- ment makes the great works, bridges, viaducts, tunnels, and cuttings. It is answerable, therefore, for the soundness of all those elemen- tary portions of the structure. To recognize the importance of that fact, let it be remembered that the recent catastrophe at Sun- ning was the result of an ill-made or an ill-preserved cutting. The previous slaughter on the Brighton Railway was caused by a defec- tive or an injured foundation in swampy ground. It may be well to avoid the dangers of concentration ; but there are dangers in the absurd degree to which the system of laissez faire is carried out among us, which might be checked by a hint or two gathered in watching the progress of our neighbours. Of that the public seem to have a growing conviction, suggested by the oc- casional smashing of half-a-dozen human beings through misun- derstandings between railway-policemen or indifferent arrangements of time. Their conviction may gather strength, when they find that one of the first English railway-engineers can devise no better stratagem to meet the dangers of " inevitable " unpunctuality and the clashing of trains, than the putting passengers to be jammed in the midst of their own train.