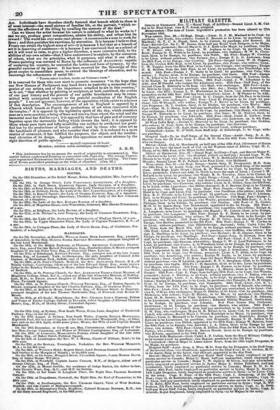 On the 19th December. at the Relief Manse, Kelso, Roxburghshire, Mrs. Jeavne, of a daughter.

On the 28th, the Lady of Dr. ALEXANDER Screens:us, of Fludyer Street. of a son. On the 29th, in Upper Gloucester Place, the Lady of Captaiu Tnoaterost, H. N., of a son.

On the 29th. in Carlogan Place, the Lady of DAVID BLAIR, Esq., of Cookstoue, For- farshire, of a daughter.

On the 16th, at the British Embassy, at Florence. ARCHIBALD CAMPBELL DENNIS- TOUN. Esq., son of the late Robert Dennistoun, Esq., Duubartonshire, to MARY, youngest daughter of the late Peter Vere, Esq., of Grosvenor Place, London. On the 27th. at Edinburgh, EDWASD Fzierow, Esq., youngest son of the late James Penton. Esq., of Lovesall. York, to Gzoasittwa. the only daughter of Colonel John Carmac, of Bretteoham Park, Suffolk, and of Woodville, Wicklow.

On the 2811, at St. Paul's Church, Bedford, the Rev. ALEXANDER GRANT. BA., of Trinity College, Cambridge, eldest son of the late Edward Grant, Esq. many years a Judge in the Bombay Presidency, to MARY, eldest daughter of Thomas Esq., Esq.. of Bedford.

On the 25th. at Warren's Hotel, Regent Street. Lord DOUGLAS GORDON HALLYBURTON, half brother to the Marquis of Mostly; in his 64th yeas. Ou the 26th. at his house. Margaret Street, Cavendish Square, Janes MORRIS DAVIS, Esq. of lmber House, Wilshire.

On the 27th, at Westfield, Captain JAMEII CHEAP!, R.N., of Balgove, eldest son of George Chespe. Esq.. of Punk.

On the 27th. at Mount Anville, the residence of Judge Burton, his father•indaw, Jona' lizapre Wm., Esq., Q.C., and M.P. for Dublin.

On the 27th, at her house in Langham Place, the Right Hon. FRANCES Baroness °maser.

On the 29th, at Southampton, file Rev. CHARLES Gluon, Vicar of West Basham, Norfolk, and late Curate of Bishopwearinouth. On the 29th, in Bloomsbury Place. Brighton, Colonel RICHARD ROBERTS. KAI., late of the Sixty second Regiment; in his 66th year.