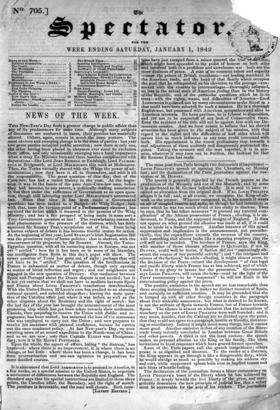 Page 6, 1 January 1842 — It is announced that Lord ASHBURTON is to proceed to
Close

It is announced that Lord ASHBURTON is to proceed to

America, in a few weeks, on a special mission to the United States, to negotiate a settlement of differences between the Republic and England. The Standard says that his special instructions are limited to these three points, the Caroline affair, the Boundary, and the right of search. The juncture is favourable, and the man well chosen. Both coun-

tiles have just escaped from a minor quarrel, the tria ROB,

which might have appealed to the point of honour on both sides and involved both in a profitless and unwelcome war both are the more desirous of peace. A man of no common talent and sagacity —once the prince of British merchants—our leading merchant in the American trade, and the head of that family which occupies the post that he relinquished on his elevation to the peerage—con- nected with the country by intermarriages—thoroughly informed, no less in the actual state of American feeling than in the history of the Republic, and of the particular questions which he it to treat—with the rights, wants, and difficulties of' America—Loed Asunuarosiis poimed out by many circumstances as the fittest na: .1 that could have been selected for such a mission. He is a thorough Englishman, but possessed with American sympathies and alive to American interests. No keen partisan, he is Liberal in disposition, and yet not to be suspected of any lack of Conservative views. Even the accident of his title will not be against him with our De- mocratic cousins. And we have reason to believe that his shrewd attention has been given to the subject of his mission, with that regard to the rights and the difficulties of bath sides which sill secure him as much influence as any man could command with both. His appointment is the wisest preliminary step towards a real adjustment of these uselessly and dangerously protracted dis- putes. Taking The measure and the man together, it is in pro- mise, whatever it may turn out in fruition, the luckiest bit that Sir Ito BERT PEEL has made.