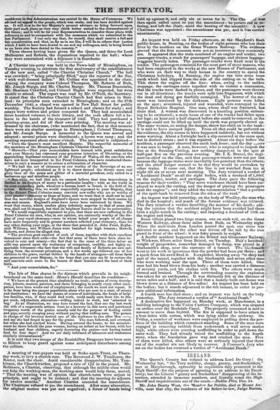 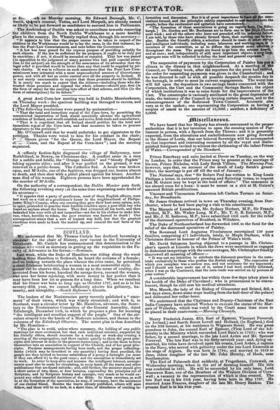 The Queen's County has refused to address. Lord De Grey ! On Wednesday last, "the Tory nobility, clergy, gentry, and freeholders," met at Maryborough, agreeably to requisition duly presented to the High Sheriff—for the purpose of agreeing to an address to his Excel- lency; but the Liberal "gentry and freeholders" disapproving of the in- tention, attended in immense numbers, and literally voted the High Sheriff and requisitionists out of the court —Dublin Pilot, Dec. 24.

Mr. John Beatty West, tbe Mewl...* for Dublin, died at Mount An- vile, near that city, the residence of his father-in-law, Judge Burton, at III.> ack on Menday morning. Sir Edward Borough, Mr. C. Smith, Quaten's counsel, Tories, and Lord Morpeth, are already named as likely tu be put forward as candidates to succeed him in Parliament.

The Archbishop of Dublin was asked to contribute towards removing the children from the North Dublin Workhouse to a more healthy place in the country. Dr. Whately replied thus, through his secretary— "it appears to him that the proper course to be taken in respect of the children in the Workhouses would be to lay the cases, in the first instance, be- fore the Poor-Law Commissioners, and next before the Government.

"A law has been passed for the express purpose of providing suitably for such objects. If the law be sufficient for its purposes, it ought to be duly put in execution ; if not, it should be amended or repealed. That law was passed (in opposition to the judgment of many persons who had paid especial atten- tion to the subject) on the strength of the assurances of its advocates that the legal relief it provided would be better than any that could be supplied by pri- vate charity. It was in reliance on such assurances that the Poor-Law Com- missioners were intrusted with a most unprecedented amount of discretionary power, and with all but an entire control over all the property in Ireland. It is not surely unreasonable to require that those promises should be fulfilled. It is surely too much to expect that the citizens—including those who dis- trusted those promises and opposed the whole scheme—should pay, first (in the form of rates) for the carrying into effect of that scheme, and then (in the form of subscriptions) for its failure."

A great Anti-Corn-law meeting was held in Dublin Mansionhouse, on Thursday week : the spacious building was thronged to excess, and the Lord Mayor presided.

111The following resolutions were passed by acclamation-

" That the total and immediate repeal of the Corn-laws, by permitting the unrestricted importation of food, would essentially advance the agricultural condition of Ireland, and would establish and revive Irish trade and manufacture.

"That it is expedient that all Ireland should petition for the total and immediate repral of the Corn-laws, and that measures be taken to procure signatures to the petitions."

Mr. O'Connell said that he would undertake to get signatures to the petitigns. Thanks were voted to him for his conduct in the chair; el- amen given "for the Queen, the Lord Mayor, the Repeal Union, and the Repeal of the Corn-laws "; and the meeting separated.

Rathfriland, n Newry, on Christmas-day. A conflict arose in a race for a saddle and bridle, the" Orange banditti" and "bloody Papists" taking opposite sides ; and after it was 'relied on the ground, it was renewed in a public-house. The Catholics fled. A house was broken open, and M'Ardle, one of the fugitives, was dragged out, beaten almost to death, and then shot with a pistol placed against his breast. Another man died of his wounds. Eighteen persons have been apprehended for the murder of WArdle.

On the authority of a correspondent, the Dublin Monitor puts forth the following revolting story ; at the same time expressing some doubt of its accuracy-

" It appears that a party of gentlemen, most of them English officers, were last week on a visit at a gentleman's house in the neighbourhood of Philips-

_toann--Kii-ig's" County, when one evening they gave their host some opium, and, in sport, proceeded to practise their horrible cruelties upon a poor idiot boy who found an asylum about the house. They first extracted all his teeth, and then bedaubed him over with oil and turpentine—set fire to his clothes to make him run, when, horrible to relate, the poor creature was burned to death ! Our correspondent states that a Sort of inquest was held, but that the greatest exertions were made to hush the matter up, and conceal the real facts of the case."