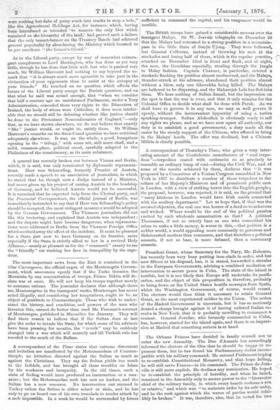 As to the Liberal party, except by way of somewhat

extrava- gant compliment to Lord Harlington, who has done as yet very little, though he has done that little well, but who is praised very much, Sir William Harcourt had nothing to say beyond the re- mark that " it is always much more agreeable to take part in the vivisection of your opponents than to assist at the autopsy of your friends." He touched on no question which affects the future of the Liberal party except the Burials question, and on that what he said was sound enough, that "when we consider that half a century ago an unreformed Parliament, under a Tory Administration, conceded these very rights to the Dissenters of Ireland, the body of whom were Catholics, it does seem intoler- able that we should still be debating whether like justice should be done to the Protestant Nonconformists of England,"—only that, as we have shown elsewhere, we do not believe that exactly " like " justice would, or ought to, satisfy them. Sir William Harcourt's remarks on the Suez-Canal question we have criticised adequately elsewhere. It was, on the whole, a good, bumptious opening to the " trilogy," with some wit, still more chaff, and a solid, common-place, political creed, carefully adapted to the Philistines of the constituency, as its main substance.