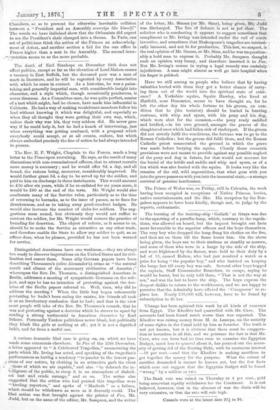 Have we still among us people who believe that by

having valuables buried with them they get a better chance of carry- ing them out of the world into the spiritual state of exist- ence? A Yorkshire squire, Squire Hawley, who lived at Hatfield, near Doncaster, seems to have thought so, for he left the other day his whole fortune to his groom, on con- dition that he (the testator) should be buried in hunting costume, with whip and spurs, with his pony and his. dog, which were shot for the occasion,—the pony ready saddled and bridled,—in his own ground, amongst the graves of the slaughtered oxen which had fallen sick of rinderpest. If the groom did not strictly fulfil the conditions, the fortune was to go to the Roman Catholics ; but the groom did fulfil them, and the Roman Catholic priest consecrated the ground in which the grave was made before burying the squire. Clearly those eccentric provisions were not meant to provide against any possible neglect of the pony and dog in future, for that would not account for the burial of the bridle and saddle and whip and spurs, or of a fox which was also buried with the squire. It looks very like the remains of the old, wild superstition, that what goes with you into the grave passes on with you into the immortal state,—a strange survival of genuine heathenism.