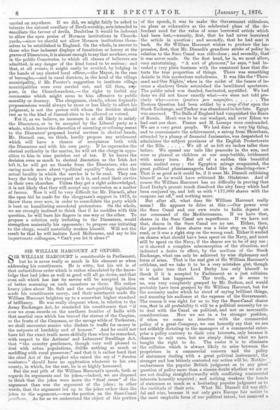 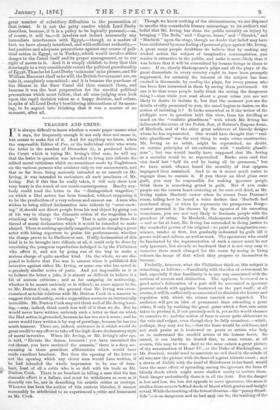 SIR WILLIAM HARCO1JRT is considerable in Parliament, but he is never really so much in his element as when addressing his constituents. He is witty, but his wit is of that unfastidious order which is rather stimulated by the know- ledge that bad jokes as well as good will all go down, and that even salt which has lost its savour will be accepted in lieu of better seasoning on such occasions as these. His rather heavy jokes about Mr. Salt and the suet-pudding legislation made his constituents merry, and their merriment made Sir William Harcourt brighten up to a somewhat higher standard of brilliancy. He was really eloquent when, in relation to the Army Exchanges Act, he reminded his constituents that "if ever we cross swords on the northern frontier of India with that martial race which has braved the storms of the Caspian, or the frosts of the Caucasus, or the savage wilds of Turkestan, we shall encounter armies who disdain to traffic for money in the outposts of hardship and of honour." And he could not- have hit the exact truth more skilfully than when he remarked, with respect to the Artisans' and Labourers' Dwellings Act, that "the. country gentlemen, though very well pleased to deal with urban populations, dislike nothing so much as meddling with rural preserves ;" and that it is rather hard that the chief Act of the prophet who raised the cry of "Sanitas sanitatum" should have no application whatever to his own county, in which, for the rest, he is so highly honoured.

But the real pith of Sir William Harcourt's speech, both as regards its arguments and its jokes,—indeed, we are disposed to think that the jokes were more the "final cause" of the argument than was the argument of the jokes ; in other words, that the argument led up to the jokes rather than the jokes to the argument,—was the portion on the Suez-Canal purchase. As far as we understand the object of this portion of the speech, it was to make the Government ridiculous, on pleas as exhaustive as the celebrated pleas of the de- fendant sued for the value of some borrowed article which had been lost,—namely, first, that he had never borro'wed the article in question; secondly, that he had sent it back. So Sir William arcourt wishes to produce the im- pression, first, that Mr. Disraeli's grandiose stroke of policy in,- relation to the Suez Canal was ridiculous ; and secondly, that it was never made. On the first head, he is, we must allow, very entertaining. "A sort of glamour," he says, " had in- vested a very plain business with the unnatural haze that dis- torts the true proportion of things. There was something Asiatic in this mysterious melodrama. It was like the' Thou- sand and One Nights,' when in the midst of the fumes of in- cense a shadowy Genie astonished the bewildered spectators. The public mind was dazzled, fascinated, mystified. We had done we did not know exactly what—we were not told pre- cisely why—omne ignotum pro magnifico. The Eastern Question had been settled by a coup d'itat upon the Stock Exchange, and Turkey was abandoned to her fate. Egypt was annexed. The Bulls of England had vanquished the Bears of Russia. Moab was to be our washpot, and over Edom we had cast our shoe. France and M. Lesseps were confounded. We are a very great people. We had done a very big thing, and to consummate the achievement, a satrap from Shoreham, attended by a plump of financial Janissaries, was despatched to administer the subject provinces of the English Protectorate of the Nile We all of us felt six inches taller than before. We spread our tails like peacocks in the sun, and were as pleased as children at our soap-bubble irridescent with many hues. But all of a sudden this beautiful vision melted away ; the Egyptian mirage evaporated, the great political phantasmagoria faded like a dissolving-view." That is as good as it could be, if it were Mr. Disraeli criticising himself as he' would have criticised Mr. Gladstone. And of course Sir William Harcourt has no difficulty in proving that Lord Derby's prosaic touch dissolved the airy fancy which had been conjured up, and left us with " 177,000 shares with the coupons cut off," and nothing more.

But after all, what does Sir William Harcourt really mean / He appears to drive at this :—Our power over the Suez Canal and our own route to India depend on our command of the Mediterranean. If we have that, shares in the Suez Canal are superfluous. If we have not that, shares in the Suez Canal are no use. Either, then, the purchase of these shares was a false step on the right road, or it was a right step on the wrong road. Either it wasted on shares what should have been spent on the Navy, and must still be spent on the Navy, if the shares are to be of any use ; or it showed a complete misconception of the situation, and indicated a desire to effect, by the medium of the Stock Exchange, what can only be achieved by wise diplomacy and force of arms. That is the real gist of Sir William Harcourt's criticism, and we take it to be a very mistaken gist, though it is quite true that Lord Derby has only himself to thank if it is accepted by Parliament as a just criticism on what has happened. The truth, as it seems to us, was very completely grasped by Mr. Dodson, and would probably have been grasped by Sir William Harcourt, but for the necessity under which he stood of saying brilliant things, and amusing his audience at the expense of the Government. The reason it was right for us to buy the Suez-Canal shares was, that in all probability it will be a political necessity for us to deal with the Canal on political, and not on mercantile considerations. Now we are in a far stronger position, if when we come to interfere with the commercial policy of a great Company, we can, honestly say that we are not selfishly dictating to the managers of a commercial enter- prise a policy contrary to their own interests, only because it chances to suit ours, but are simply doing what we have

bought the right to do. The easier it is to eliminate the collision which is always likely to arise between the proprietors in a commercial concern and the policy of statesmen dealing with a great political instrument, the stronger and less bitterly contested our action will be. Nothing embarrasses the popular British judgment as to any great question of policy more than a sincere doubt whether we are or are not dealing straightforwardly with conflicting commercial interests honestly acquired ; and nothing weakens the hands of statesmen so much as a hesitating popular judgment as to the rectitude of their acts. What Mr. Disraeli did was skil- ful and wise, because it not only gave Europe fair notice in the most emphatic form of our political intent, but removed a

great number of subsidiary difficulties to the prosecution of that intent. It is not the petty resolve which Lord Derby describes, because, if it is a policy to be logically pursued,—as, of course, it will be,—it involves not indeed necessarily any immediate interference with Egypt,—though as a matter of fact, we have already interfered, and with sufficient authority,— but positive and adequate precautions against any course of poli- tical action in Egypt, or in Turkey, which would involve either danger to the Canal itself and its proper management, or to our right of access to it. And it is simply childish to deny that this does imply to a very considerable extent the political guardianship of Egypt. Thus far let Lord Derby minimise' as he pleases, and Sir William Harcourt chaff as he will; the British Government are, we take it, completely committed ; and it is because the purchase of the Shares in the Suez Canal did thus commit them, and because it was the best preparation for the needful political precautions which must follow, that all sane-judging men look upon the rapid decision taken as a happy decision, and refuse, in spite of all Lord Derby's bewildering attenuations of its mean- ing, to be argued into thinking that it was a matter of no moment, after all.