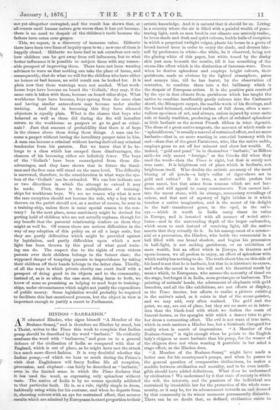 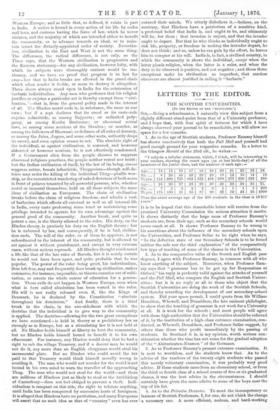 AN educated Hindoo, who signs himself "A Member of the Brahmo-Somaj," and is therefore no Hindoo by creed, but a Theist, writes to the Times this week to complain that Indian pomp should be described by the word "barbaric." He evidently confuses the word with "barbarous," and goes on to a general defence of the civilisation of India as compared with that of England, which is out of place, as he might have met the attack in a much more direct fashion. It is very doubtful whether the Indian pomp,—of which we hear so much during the Prince's visit that Englishmen will fancy Indian life all reception, procession, and elephant—can fairly be described as "barbaric," even in the limited sense in which the Times declares that it has used the word, as expressing only splendour without taste. The native of India is by no means specially addicted to that particular fault. He is, as a rule, rigidly simple in dress, habitually using white for his costume, and when he departs from it, choosing colours with an eye for restrained effect, that secures results which are admired by Europeans in exact proportion to their artistic knowledge. And it is natural that it should be so. Living in a country where the air is filled with a painful wealth of pene- trating light, such as men bred in our climate can scarcely realise, he loves shade and dusk and quiet colours, builds halls of reception in which a perpetual twilight reigns, plants his house in a grove of broad-leaved trees in order to enjoy the shade, and dresses him- self by preference in white—the white, be it observed, being not the glaring white of this paper, but white toned by the dusky skin just seen beneath the muslin, till it has something of the cream-like effect which is the distinction of Satsuma-ware. Even when he desires splendour and employs bright colours, their- garishness, made so obvious by the lighted atmosphere, pains- and annoys him, till he has learnt, by the observation of- centuries, to combine them into a flat brilliancy which is the despair of European artists. It is the positive pain received• by the eye in that climate from garishness which has taught the native to combine insufferably gaudy colours into the Cashmere shawl, the Mirzapore carpet, the marble-work of his floorings, and the broad-brimmed, coloured turban of full dress, often a mar- vellous specimen of art, and always, unless injured by some caste rule or family tradition, producing an effect of subdued splendour as little barbaric as the newest French ribbon in feints degrades. The dress of a great native magnate, the account of which reads so• " splendiferous," is usuallya marvel of restrained effect, and no more barbaric—that is, no more wanting in essential harmony with its end—than that of the great Parisienne, who, like the native noble, employs gems to set off her raiment and show her wealth. If, indeed, " gold and pearl " be in themselves " barbaric," as Milton said—he only meant "foreign," as the Greeks did when they used the word—then the Times is right, but that is surely not true taste. It is brightness out of place which is barbaric, not brightness itself. Who doubts the artistic accuracy of the most blazing of all jewels—a lady's collar of tiger-claws set in gold and rubies? It is true, a native noble prefers his gems uncut, but that arises from reasons which are not bar- baric, and will appeal to many connoisseurs. You cannot imi- tate the uncut stone, with its strange, momentary revealings of colour, and that sort of mystery of light hidden in it which touches a native imagination, and is the secret of his delight in the half - translucent gems, in the opal, in the cat's- eye — which is worth in India many times its value in Europe, and is invested with all manner of weird attri butes—and in the unrevealing depth of the larger carbuncles, which seem to emit instead of receiving light, till the native asserts that they actually do it. In his management of a ceremo- nial or a procession, the Hindoo, who holds the ceremonial in a hall filled with one broad shadow, and begins his procession in half-light, is not seeking garishness, or an exhibition of mere wealth, but an effect which in Europe, in theatres and opera-houses, we all profess to enjoy, an effect of splendour with which reality has nothing to do. The truth about him on this side of his head is not that he is barbaric, but that he is histrionic to excess, and when the mood is on him will seek his theatrical result by means which, to Europeans, who assume the necessity of tinsel on the stage, but forget it in India, seem grotesque or barbarous. The painting of animals' heads, the adornment of elephants with gold bracelets, and all the like exhibitions, are not efforts at display, as the Times fancies, but efforts to realise a picture existing in the native's mind, as it exists in that of the scone-painter, and we may add, very often realised. The gold and the paint, we say, are out of place, but they are no more so in inten- tion than the black-lead with which we darken the coats of funeral-horses, or the spangles with which a dancer tries to give her dress a coruscating effect. The evil is not want of true taste, which in such matters a Hindoo has, but a histrionic disregard for reality when in search of impressions. " A Member of the Brahmo-Somaj " is right enough when he points to the English lady's chignon as more barbaric than his pomp, for the wearer of the chignon does not when wearing it postulate in her mind a stage-effect, as the Hindoo does.