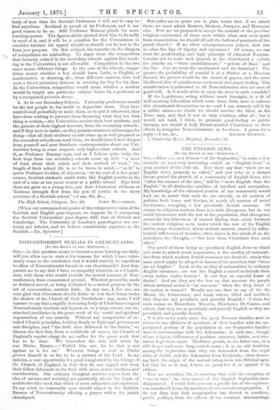 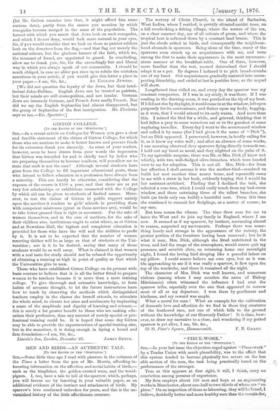 (TO THE EDITOR OF TUN "SPECTATOR.")

Sin,—Allow me, as a Jewess "of the Sephardim," to make a few remarks on your very interesting article on "English Jews" in your number of the 25th ult. You there say that "there are no English Jews, properly so called," and you refer to a distant future period the growth of a community of English Jews, who "after the manner of the race," will be "more English than the English" in all distinctive qualities of intellect and occupation. My knowledge of the educated portion of our community would lead me to assert that such we are already, in all matters of politics, both home and foreign, in nearly all matters of social intercourse, excepting a few peculiarly Jewish customs. Of course in religious matters there is a wide divergence, but in our social intereourse with the rest of the population, that divergence causes far less bitterness of mutual feeling than exists between the various religious sects under which the rest of the English nation range themselves, whose mutual rancour, caused by infini- tesimal differences of doctrine, often raises in the minds of us, the onlookers, the thought,—" See how these Christians love each other."

One proof of there being no peculiarly English Jews to which you seem to attach much importance, is the medley of nationali- ties from which modern Jewish surnames are derived ; surely this same proof might be alleged in favour of the assertion that "there are no English." Look at the medley of nationalities in ordinary English surnames ; are not the English a mixed multitude from every nation under heaven ? Is not that an especial boast of theirs? And are they any the less on that account the people whose national action is "as one man" when the deep heart of the nation is roused? Would any one dare to say of the St. Maurs, the Grosvenors, and many others, titled and untitled, that they are not peculiarly and proudly English ? I claim for such names as Montefiore, Mocatta, Henriquez, De Castro, and others, that they are as peculiarly and proudly English as they are peculiarly and proudly Jewish.

_ It is not many years since the great Norman families were as averse to any alliances of members of their families with the un- pedigreed portion of the population as our Sephardim families were to intermarriage with the Askenazim ; in each case, though of one religion, differences of position, manners, habits, and edu- cation kept them apart. Tradition points, in the latter case, to a still deeper and more long-rooted cause ; it is an old tradition among the Sephardim that they are descended from the royal tribe of Judah, and the Askenazim from Benjamin,—thus throw- ing back the origin of the mutual antagonism into Biblical ages. Let that be as it may, I have no proof for it or against it to adduce.

You are mistaken, Sir, in asserting that, with the exception of " one or two," the very names of the English Sephardim have disappeared. I could write you out a goodly list of the euphoni- ous names still borne by members of our ancient congregation. I do not deny that that congregation has shrunk in numbers, partly, perhaps, from the effects of too constant intermarriage

(let Mr. Galton examine into that, it might afford him some curious data), partly from the causes you mention by which renegades become merged in the mass of the population. The hatred with which you assert that Jews look on such renegades, and which I do not deny, would look more natural in your eyes, Sir, if you would consider that we look on them as patriot soldiers look on the deserters from the flag,—and that flag not merely the national colours, but the glorious banner of the faith, which we, the remnant of Israel, are appointed to guard. In concluding, allow me to thank you, Sir, for the exceedingly fair and liberal way in which you always speak of our community. I should be much obliged, in case no abler pen rises up to refute the mistaken assertions in your article, if you would give this letter a place in

[We did not question the loyalty of the Jews, but their intel- lectual John-Bullism. English Jews can be trusted as patriots, but their minds are still cosmopolitan, and not insular. German Jews are intensely German, and French Jews madly French. Nor did we say the English Sephardim had almost disappeared, but the group of Sephardim of the first immigration. Mr. Pieciotto says so too.—ED. Spectator.]